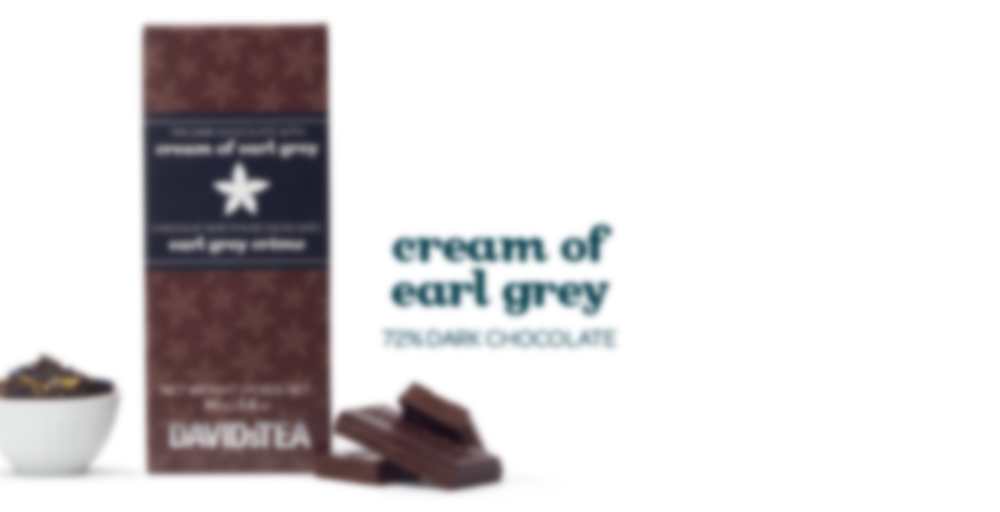 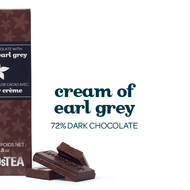 We worked with a local Montreal chocolatier to bring two of our very favourite things together: tea and chocolate. And the results are totally out of this world. Each bar combines the highest quality imported chocolate with our loose leaf tea blends – it just doesn’t get sweeter than that. With 72% rich dark chocolate and our Cream of Earl Grey tea, this sophisticated chocolate bar pairs the floral notes of bergamot with an unexpectedly creamy hint of vanilla bean.

I had a bite of my wife’s square of this chocolate and it was so, so yummy. I love the vanilla flavor coming through the chocolate and even the bergamot isn’t a turn off. All in all, a very lovely bite. Again, I wish it wasn’t dark chocolate, but this almost makes me forget that.

hmmmm so the blergamot isn’t bad?

Nope, and I’m not a fan of bergamot.

good to know :) might have to check this one out

I think it’s definitely worth a try, if only to say you’ve tried it, you know?

Take a deep whiff of the bar as soon as you open it, and it’s just a gorgeous wash of Earl and bergamot. First bite is all sweet dark chocolate, but the aftertaste is entirely Earl. Very tasty, but so dark that I can’t eat more than a square at a time.

Have you tried any of the other chocolate flavours? I bought all 4 online and have only tried the Matcha Matsu one, which I found was not very good. I’ve got high hopes for the other three though, especially the milk chocolate coco chai rooibos one.

I’ve tried the Hot Lips and the Matcha Matsu, but since I don’t actually like either of those teas to begin with, I wasn’t a fan. The Earl was amazing.

This is in regards to the Cream of Earl Grey dark chocolate covered hazelnuts I picked up the other day.

In general, these are delicious. The dark chocolate is damn dark and pairs well with the hazelnuts, but if I were to judge them based on the tea-infused aspect, they’re just alright. Comparing these mentally to plain chocolate covered hazelnuts I’ve had in the past, the Cream of Earl Grey flavour isn’t prominent enough to confidently establish their presence alongside the bold flavours of dark chocolate and hazelnut. I can detect an ever so faint touch of vanilla in the chocolate, as well as a citrus note, but it’s not obviously bergamot. I would have sooner guessed orange, but perhaps because that’s the most popular citrus combination with chocolate. Even when you smell the bag, it smells more like weak chocolate orange than a distinct bergamot. In other words, there just isn’t enough of the bergamot in here to be able to tell it’s bergamot.

For $4 they’re still a bit too much for what they are but I’m still glad I tried them. Plus, they’re pairing well with the gasp coffee I’m having for a late breakfast. I’m normally not affected by caffeine but after a serving of these and two cups of coffee, I’m feeling a little buzzed from the coffee, dark chocolate, and sugar combination. I can feel it in my limbs!

Coffee??!! Shame on you! just kidding. I only bought DT chocolate once and rooibos got stuck in my teeth. Never tried it again.

I got my DaVIDsTEA order! But it didn’t have any tea in it besides samples (I was dying to get my hands on the mason jar and glass travel tumbler), so I’m tempted not to even really count it as a tea purchase, per se.

I have been quite intrigued by the tea chocolates and needed a little more to get me to free shipping so i opted for two bars of this since I love both Earl grey and dark chocolate. Sadly I was not super in love with this. I mean, it’s chocolate, and a good dark at that, but here are gritty bits of tea leaves in there…I guess I was expecting more of a tea infusion than anything else. I do get the bergamot and dark chocolate together and they are every complementary but the texture is really off putting.

Eh. I’m almost kind of glad I’m not in love with it…at least if it ends up being a limited edition thing I won’t be sad when it goes away.

I am not a drinker of black teas (or at least not yet) but I enjoyed this. The dark chocolate flavour is the strongest, of course, but I could taste the tea in the background. I didn’t get the vanilla flavours that others have claimed, but the black tea adds a smoky hit that mingles very well with the chocolate. I’m also sensing something deep and fruity, which I assume to be the bergamot, but it doesn’t seem like a citrus flavour to me at all. It reminds me more of chocolate-covered cherries.

All in all, really nice and rich, but I think that the Earl Grey-ness of it all is lost on me.