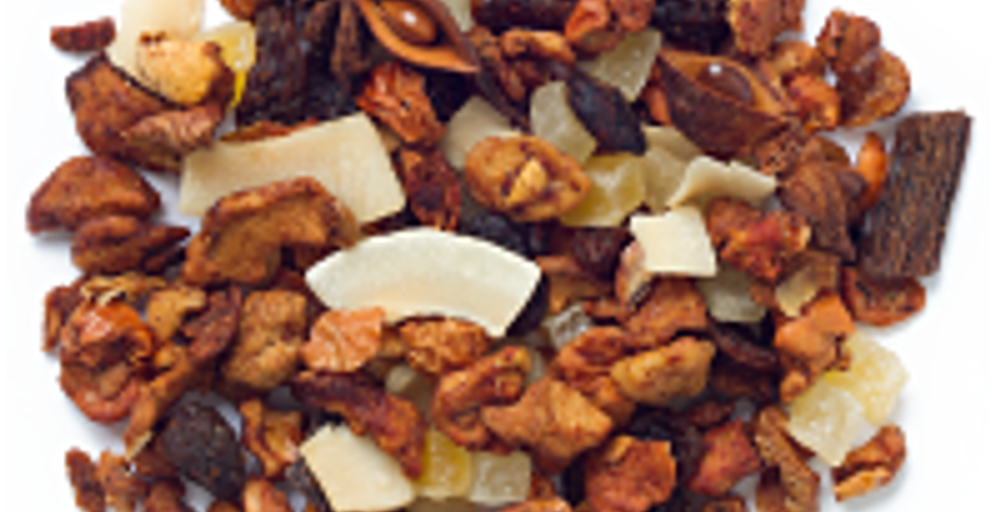 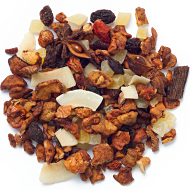 Calling all beach bunnies…you are going to flip out over this tea. It’s amost excellent blend of tropical fruit, coconut and spices. It’s sweet and mega creamy, just like a totally primo piña colada. And if you really want to get amped, try freezing it into ice cubes and putting them in your blender with agave and a little coconut milk. It’s, like, off the wall. Take it from the big kahuna: this is one wave you definitely want to ride. Toes on the nose, dudes!

I threw the rest of what I had into my steeper and made it an extra strong iced tea… but I think time has really effected this one as it didn’t taste all that great. I ended up tossing what I had made. Something just seemed off….
Stop hoarding tea! A lot of it can’t handle it! haha

Delicious! Thoroughly enjoyed my cup. It’s as if it was sent straight from the tropics. Coconut and pineapple are predominant but the overall vibe is a tropical smorgasbord. Naturally sweet so no added sweetener was needed. I would have given this an 80 but I took a point off for tasting slightly artificial, hence my 79 rating.

A delicious piña colada iced tea! I got this as part of a clearance sale over the winter and saved it up for the summer. Sadly, I don’t think they have this flavor anymore… 10 oz boiling water poured over ice.

This makes an amazing iced tea!

A sample from Miss B! Another David’s blend I’ve heard good things about but not tried before – until now! I used 2 tsp of leaf for my cup, and gave it 4 minutes in boiling water. It smells really good, first off. Like a pina colada, only hot. To taste, it’s also pretty amazing. The initial sip is intensely tropical – I can taste coconut and pineapple primarily, maybe a touch of mango. There’s a slight whisper of spicing at the end of the sip, but it’s not overpowering or even really all that present. If I’m honest, I’m not sure what star anise is doing in this blend at all, but it doesn’t impact too much on the flavour so I’ll put that aside.

What this tea reminds me of most is one of those freshly squeezed fruit juice blends, only with a touch of added cream. The creaminess kind of crept up on me – I didn’t really notice it at first, but it gets stronger and stronger with successive sips. Another thing that builds in intensity is an artificial-tasting sweetness at the back of my throat. I’m guessing this blend is maybe pre-sweetened with stevia? Either that or there’s some liquorice root kicking about. It’s that kind of sticky, overbearingly intense sweetness that becomes difficult to ignore after a while.

Having said that, I am enjoying this one. I like the fruitiness, and the creaminess adds that extra touch of deliciousness. It has a brilliant tropical fruit juice/pina colada vibe going on, and in that respect it’s very easy to like. The intense sweetness is perhaps to be expected, and to be fair it’s not completely spoiling my enjoyment. I’m just very aware that it’s there, and really speaking it’s a little more than I’d like. It’s unseasonably warm today, so I feel like this tea made a fitting afternoon companion. A little hint of summer in a cup.

I wasn’t a fan of this one…it had a funny smell and and taste. I think I may have to give the rest of it away, but I may want to try it one more time and shorten the steeping time…

Piña colada with star anise. Truthfully, that sums it up. It smells delicious, but one sip made my stomach turn.

Do you like Piña Coladas? Do ya do ya do ya? If you do, this tea is for you! I tried this for the first time in store for my free cup, and let me say, it was love at first sip. I just HAD to buy it. I’m normally not a big fan of a lot of tropical tasting teas because I don’t like many sweet tasting teas, but this.. this is amazing. It smells like paradise and it pretty much tastes like it too. Such strong flavors of mango and coconut just give me the chills thinking about it. The thing I love about this tea, is that you don’t need more than 1.5 tsp/ 8oz to get the full flavor. God I am just in love, this is definitely one of those teas I want to have in my cupboard indefinitely.

I popped by my local DT today and decided to try this tea. It’s finally sunny outside, so I figured this would be refreshing!

This tastes very much like a Pina Colada! It’s quite tasty! The smell and flavour are really close, which is nice. There is cinnamon in this tea, but it doesn’t really come through. I kind of wish it did though…it would be an interesting take on a pina colada and would also add to the “hot” part of Hot Tropic. Maybe as a hot drink you can taste it more. I had this cold so I’m not sure haha. I got this with sweetner in it, but I’m not sure that it is necessary as this is very sweet.

Overall, it’s yummy, but I probably won’t keep a stash of my own. I would definitely drink it again though!

Over-the-top sweetness. The coconut and fruit blended well. Maybe I’m just not in a summer frame of mind today. It’s raining and overcast, and brewing this tea hot just didn’t send me to paradise. It wasn’t bad! It just wasn’t very memorable. But, my boyfriend loves pina coladas so maybe I’ll order some for him. This was June 2014 Tea of the Month.