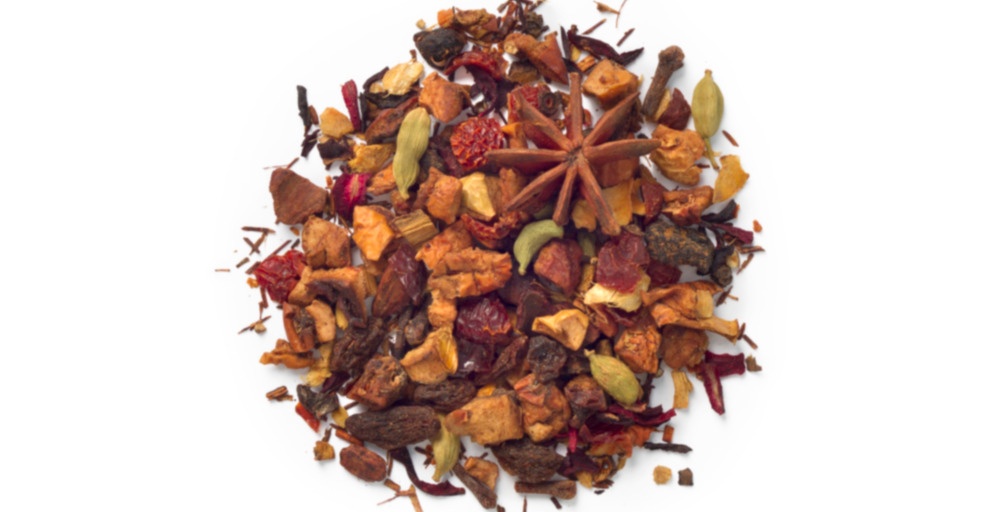 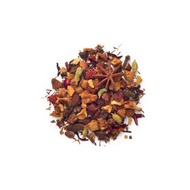 Whether you’re out sledding or just doing some holiday shopping, there’s no better way to stay warm and cozy than a piping hot mug of tea. And this tartly fruity, lightly spiced blend is the perfect winter companion. Just one sip and you’ll have visions of sugar plums dancing in your head. Not to mention apple, hibiscus, ginger and warm winter spices. It’s the perfect shot of warmth on a chilly winter day.

Tea for All Reasons 79

I remember hating this tea the first time I tried it, so I’ve been avoiding the rest of my sample ever since. When I finally bit the bullet and made it again, I’ve discovered that it’s actually not bad. Now I’m wondering if it’s mellowed out over time, if the proportion of ingredients or my tastebuds have changed, or if I was actually getting it mixed up with a different tea – maybe Sleigh Ride? Either way, this was a pleasant surprise. Very heavy on the winter spices, but the tart and juicy fruits added to the spice mixture remind me quite a lot of mulled wine. The anise isn’t overpowering, which is what I was afraid of, and actually blends into the background nicely with notes of clove and cinnamon alongside tart – but not sour – apple and plum. It’s not the best tea in the world I’ll admit, but I was expecting to hate it so this not-bad cup is a pleasant surprise.

I detest licorice and anise, so I am probably biased. But even beyond that, this tea just tastes confused. Muddy, sour in a bad way, and any somewhat pleasant floral notes are drowned in spice. It tastes spoiled somehow. I’ve tried to like this, I’ve tried different preparations, and it always turns out foul. I dunno. Maybe this would appeal to people that like a smorgasbord of flavours, but for me all the notes are confused and unpleasant.

Meh. Too much hibiscus. The combination of ingredients is kinda weird.

Ick I’m staying away from this one.

So yes. One from the backlog.
Smells fantastic, like a sugar plum forest I imagine .
Strong and savoury with sweet low notes and
spicy high notes. I like my licorice and cinnamon to kick me in the taste buds and lets hope this doesn’t disappoint.I’m a strange one I like teas that are usually an acquired taste except for hibiscus….go get dressed none of your shenanigans in my tea. Now onto the sippage. With a horror movie, a plush blanky and tea.

Okay so super soothing and warming which is wonderful . no harvest apple spice by tea forte but it’ll do in a pinch.I’ll finish my stash which isn’t much but this won’t be a mainstays. However this is nice and warm and a shot of whiskey or brandy might actually be a welcome addition for the coming winter.

This smells SOOOOOO good, like a beautiful miller winter cider, but the flavour is really strange and tart. Sad.

I was at a friends house one night and decided to make a tea! This is the one I chose to make because I had never tasted it before.
It’s interesting… kind of cider-y. I agree with all of the people saying there are sooooo many flavors in this. But there’s not really a great balance of those flavors. They’re all so strong. Some sips were more enjoyable than others, which was weird. It wasn’t as consistent as it could have been.
This is probably my least favorite of the Christmas teas I’ve tried. This or cocomint cream. It isn’t awful if you like that cidery kind of flavor, but it really isn’t my thing. I’m glad I tried it at a friend’s house instead of buying some for myself haha. I won’t be stocking up, but it was good to taste it!

I really like the smell of this but I cannot for the life of me taste the rooibos in this blend. The first cup I drank had a weird artificial taste to it, almost like aspartame but not really. I don’t really notice that now that I’ve had a few cups. I’ll sip the rest of the bag but won’t be crushed when it’s empty.

I was surprised by the number of negative reviews on this one. I quite like it. It’s strong and fruity and full of hibiscus, sure. But I find it to have just the right amount of tart and sweetness that I really enjoy drinking it. On days when the strong flavour doesn’t appeal to me, I mix a bit of this with some Dragon Pearls or straight rooibos to tone it down.

Maybe my attachment to this tea is a sentimental one. It tastes almost exactly like the first loose leaf tea I ever fell in love with, which was Apple Cinnamon from Teaopia. I was sad when the company was bought out by Teavana and my favourite herbal tea discontinued, so it’s nice to find a replacement.

I wouldn’t drink this tea every day, but it’s a great treat on days when I’d otherwise calm mu sugar cravings by eating a bunch of candy.

What is this tea even? It smells like Christmas mulled wine or wassail while its being brewed, and perhaps the taste is similar. Its kind of sour-ish with an aftertaste thats not exactly bitter, but I can’t find another fitting word. Its unpleasant and sticks in the back of your mouth. Its not the chilies, I am a HUGE chili lover, and I found them completely lacking in this. Maybe its the bruised pepper – I mean, come on what is this?

Day 14 of the advent calendar. I’m surprised that most of the reviews for this tea are so negative. I didn’t think it was THAT bad! It turned out tasting just like what I had expected from a tea with a name like “Sugar Plum Forest.” Reminds me of a tea you’d have at Christmas. Spices mingling with fruit. I toned mine down with a dash of milk. I didn’t hate it but wouldn’t buy more either.