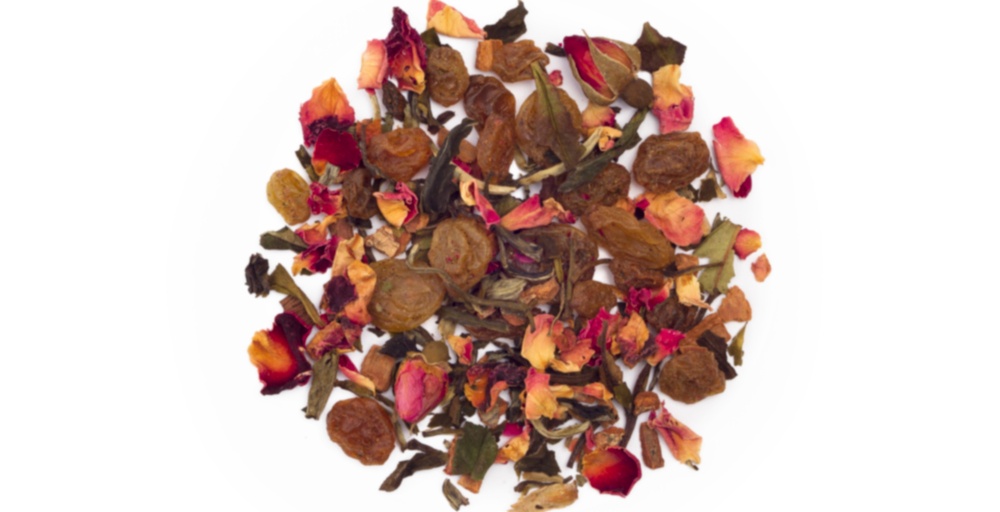 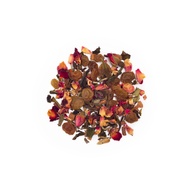 Rose to the occasion

Whether you want to impress a date, pamper a friend or just make someone’s day, you can’t go wrong with roses. For the ancient Egyptians, they were sacred flowers. In the middle ages, they were the preferred spa treatment of the rich and famous. And today, they’re the star ingredient in just about the prettiest, most luxurious tea ever. With big pieces of creamy vanilla, sweet golden raisins, a hint of cinnamon and an abundance of rose buds, it’s rich, sweet and lightly floral. Talk about flower power…

I wasn’t expecting much from this tea. For some reason, I thought that the rose might make it slightly bitter but I’ve never been so happy to be wrong. It’s light and smooth and flavourful and an overall delight! Such a pretty blend too, with all the little pink rosebuds. Perfect tea to sit and unwind with and I love that it’s a white tea, added bonus! An underrated gem!

I haven’t had this tea since it came out for mothers day 2015, and my- I’d forgotten how delicious it was. I think I had given it away because vanilla wasn’t my thing, but tasting it again makes me love it this time around. Vanilla isn’t too strong – which I like. And the rest tastes floral and creamy- with a hint of cinnamon. I really like the raisins in this tea. It’s a very comforting blend.

Is there white tea in this tea?

David’s has this thing where the flavoured white teas contain like a teaspoon of white tea in a bucket of fruit mix. And yet the cost of the blend is elevated as if the tea is not just trail mix or a variation thereof but actually white tea. Right then. I just had to get that off my chest.

That said, this was one of my favourites of their spring or summer 2015 line.

I like the light rose vanilla thing going on here. A good balance of flavours which doesn’t taste much of perfume. There is also a bit of bitter undercurrent, which I suppose is meant to provide substance to these light layers. Is it chicory? Dandelion? Plus cinnamon? I need to review the ingredients list again. A familiar taste in David’s teas which I often find repugnant, but here it is fine.

Mind you, I steeped this very briefly a few minutes after boiling.

Because I enjoyed this so much initially, I’ve been saving the small bit that I have left because I think it is no longer available. I am enjoying this cup and will enjoy the next, but the tea is just not as glorious as it was in memory. I had initially been kicking myself that I hadn’t bought another bit of this tea, but I think I’ll get over it.

sadly, that’s often the case. Decide to hord, then hord, then slowly fall out of love. :(.

That, keychange, is the lesson for us then. Live in the present. Seize those intoxicating flavours now! Now! Life’s pleasures are a fleeting thing.

I enjoyed my second steeping of this tea far more than the first. Some much so that I’d bump my rating up to 90. The flavours had mellowed a bit and melded into each other into a fine cup.

This tea smells interesting and a real departure for the usual gentleness of white tea blends. I’m always excited to try seemingly wierd blends. Like crossing into untouched waters really. For safety I only got 10 grams because white teas can be expensive and I may hate it…who knows!

Tea time as my breville beeps.so this really seems a crazy mish mash of flavors and ingredients. Let’s drink!
Okay so waaaay gentler then I thought. A bit if a cinnamon kiss and creamy. Perfectly pleasant nothing to write home about but I drank all 10 grams and don’t regret it. Don’t think it needs to live on my shelf just not that newsworthy . Better stuff to spend your money on. Definitely a palate cleanser though.

Looks like another polarizing blend here. I so didn’t expect to be in the like camp!!
I was curious about how vanilla, cinnamon, rose and raisin would blend up, but I just assumed it would be somewhat wretched. My bad DT!
It was actually quite nice. I was shocked. Very warm, smooth and comforting, but not overpowering in any of the flavours. and familiar in a way I really can’t put my finger on. Perhaps I’ll figure it out next time. Grandma’s soap? Not quite… soap meets cookie? Hmmmm.
Of course, given the nature of the varied ingredients, I’m guessing each cup will turn out to be slightly different. Also, so much raisin! Makes for a heavy, and thus expensive blend.
So while I do enjoy this one a lot more than I expected, it is something I can live without. If it sticks around for awhile, I may grab some more down the road, but I won’t be crushed if it’s gone by then. shrugs

On a more personal note, I start a one month temp job tomorrow. In the suburbs, which I despise, but well I really need the money.
Unfortunately I haven’t seen the specialist yet(3 referrals and each one got screwed up/rejected for different reasons!), and last I checked my GP wasn’t comfortable writing the initial script. But I really do need it to function all adultlike at work so I have a hail mary plan – call the docs office tomorrow and BEG for a one month script just to tide me over until the specialist app comes through. GP was on vacay last week when I found out about the job, and my latest referral had just been rejected that day(because the nurse never specified my need for meds on the fax) so not like I could have planned this to be less rushed… anyhow, I’m not sure what else to do at this point. Between a rock and a granite place I am…

This sounds lovely to me apart from the raisins especially given how much you noted their presence. Still Grandma’s soap meets cookie has me curious. Good luck with the new temp work.

Actually I didn’t notice them so much in the taste, more in the scent of the dry tea. Wet, it all blended together and I really couldn’t identify raisin per se.
Also thanks for the luck!! I’m going in to see the doc tomorrow.

I LOVE THIS TEA. I have only tried it hot thus far. I like my teas light and floral/sweet, but hadn’t had much luck with some of the other davids teas like the forever nutes, peach, guava, etc just too fruity and strong for me but THIS IS THE ONE that my heart wants. Will try it cold as summer approaches. I find myself craving it all hours of the day.

hot: doesn’t taste like much, I might oversteep it next time. Cold: same but a little better. Tasteless works a lot better cold than hot. I might just eat the rest of the raisins straight out of the tin.

Those are some expensive raisins!

I got inspired and bought raisins from the supermarket instead! haha.

I was really hoping to love this one, it smells great and tastes very good. But after one cup, I couldn’t drink it ever again. Makes me nauseous just thinking about it. It’s the same feeling I get from Forever Nuts by DavidsTea… that cloyingly sweet taste.

I like this better than I expected – I don’t usually like florals too much but I got 10g to try. It’s very mild but tastes nice (vanilla and fruity with just a hint of rose… I may have tossed out a rosebud or two). I might have let the water cool too much because I’m afraid of burning my white teas! Will make hotter and stronger next time.

This is heaven in a cup – it smells like cinnamon and tastes very similar – light, floral and a hint of fruity. Rose is my absolute favourite scent and I wish this were sold in perfume form. *Although I don’t love that David’s Tea is taking a turn into that market, it’s weird.

I brewed this hot and enjoyed every last sip. I will be stocking up on this blend, for sure!