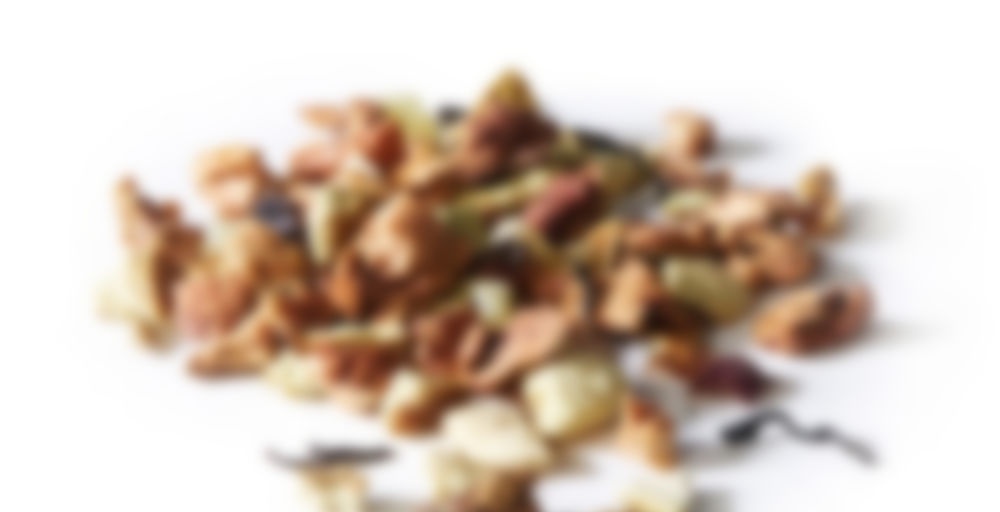 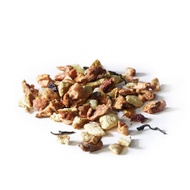 Spice up your holiday. Sweet and spicy with a hint of rich caramel, this low caffeine black tea blend is inspired by satsuma, a mouth-wateringly zesty orange variety. Plus it’s got all the warmth and comfort of a festive spice cake, minus the calories. Serve it with your favourite teatime dessert for a sophisticated afternoon treat.

Finally a SIPDOWN! It’s fun “shopping” in your own cupboard!
I’ve had this one in the cupboard for about 2 years now, but finally am drinking it now. It’s from an advent calendar and came in a baggie. I ended up using the whole sample as it didn’t look like it had much in the way of black tea leaves in there, but they were hiding under all the apple in the sample.

I can see how people would like this one, especially this time of year when everything is sugar and spice and everything nice, but for me it wasn’t all things nice. All I get is an over abundance of apple and sweet. The orange is there, but it definitely takes a backseat to the apple. DavidsTea is really bad for overloading a tea with apple, probably because it’s a cheaper ingredient (I believe it is anyway?).

So, would I buy this one again? No. Not unless they change the recipe and make it far more orange.
I tried it straight up and with milk and sugar. I shouldn’t have added the sugar as it’s far too sweet now, but either way, I didn’t really love this tea and will probably go make something different for myself now.

I overleafed this tea, but the flavor still came out super mild. Other reviews complain about it being too sweet, but I must be some monster because even after adding sugar, I still don’t find it sweet enough. It’s lightly orangey, but the black tea tastes a little low quality. The whole blend just seems pretty artificial and meh. I’ve shared it with a few family members, and they all thought it was pretty strange as well.

Years ago I Had Orange black spice tea bags. They were cheap, and I cannot remember the blend or where I got them. Not high quality. They were fabulous and I have been wanting something I’ve enjoyed since with a spice and orange. You’d think since this was a common profile blend, it’d be easier! Sorry this one did not work for you, I have the same issue often with orange spice teas – same for cinnamon. Most are weak tasting to me, or artificial.

Yeah I don’t know if I’ve found a tea I really love in that flavor profile!

I’m not quite sure how satsuma differs from orange. Is orange the general term like apple and satuma is a type like fuji or granny smith? I have some google searching to do! I saw one review where someone compared it to the taste of a chocolate orange and I feel like that is a pretty good description. It has a similar flavor and boldness. There is a little bit of a tart tang to it and it lacks the depth that actual chocolate brings to the chocolate orange. The finish is a bright orange flavor, but I’m not getting any spice or the cake association. Either way it’s a nice cup to start my morning with!

Update after my google search: I might have a satsuma tree growing in the backyard! There is some sort of citrus tree that I ignore and the rats from the neighbor’s garage devour. I have a sensitivity to the citric acid, so I have to pick and choose when to eat citrus (flavoring like in tea is fine) and the fruit on this tree doesn’t make the cut. In my quick search I ran across a recipe that uses zest from the fruit for a curd and I think I could eat that. I’m going to have to give it a go!

A satsuma is in the mandarin family and is a kind of tangerine. It has soft, loose skin that you peel to get to the seedless citrus sections inside. Its flesh is tart/sweet.

It looks like it’s a type of mandarin, similar to but not the same as a tangerine.

Ah, okay. It’s looking like they are hard to tell apart from others like clementines. Now I’m not sure what this tree in my yard is!

Clementines are usually fairly small. They are smaller than tangerines and satsumas. They are rounder and have tighter skin than a satsuma (which tends to be more like a slightly flattened orb) and their flesh is sweeter than a satsuma, too.

I’ll have to keep a lookout for satsuma at the grocery, now I want to try one! :P

another sipdown Still too sweet and weird for me at the end of the day.

Now, I was really excited after smelling the raw ingredients and knowing that many have already enjoyed this steep. However, I have to say, I was a bit disappointed after my first few sips. This isn’t a bad tea, but I also don’t find anything particularly special or unique about it. It has the bitter black tea feel, but I am shocked that I don’t get the hint of any orange giving its smell. The fruit elements combine together to create a more subtle spice cake flavoring, but the orange is absent. As well, I find the flavor more hidden and subtle rather than the bold flavor I would normally expect from a black tea blend.

Thank you for sharing this one Roswell Strange but it was just too sweet and didn’t deliver in taste what it promised in scent.

Tastes like those Terry’s chocolate oranges from Christmas. A bit heavy on stevia but a cozy tea.

Definitely a nice, festive holiday blend that is a bit more unique. I’m mainly getting a candied citrus peel (caramely sweetness with some bitterness from the peel). I don’t get any spice, but I’m okay with that. I’m actually really enjoying this tea. I was hesitant my first couple sips, but the more I drink it, the more I want to keep drinking it.

We spent one of the evenings at my apartment this past week – mostly to make supper with the haul of food we’d gotten from Jean Talon Market but also so I could package up some tea samples for my mom to make her own “Tea Advent”.

This is the tea I steeped while packaging – it wasn’t picked for a particular reason aside from the fact I saw the bag and it sounded good. Sweet and bright notes of citrus with that candied/sugary caramel type of undertone. Smooth and just enjoyable.