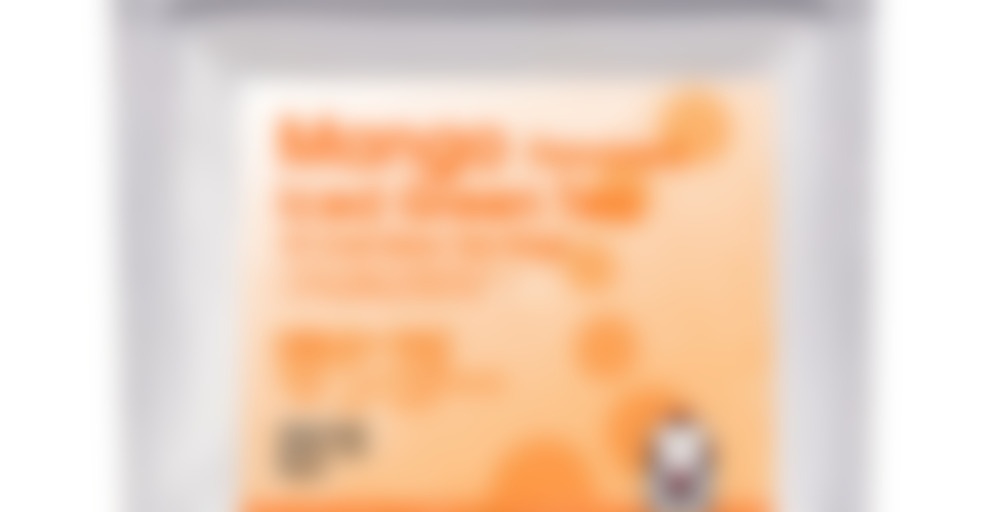 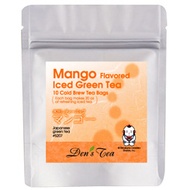 Mango is a flavorful tropical fruit. The only improvement we could think of is to combine it with our rich Sencha. Fresh Sencha flavor and sweet Mango will bring a tropical summer treat to your tea time.

Brewing: Place one tea bag in 20 oz of water and let infuse for an hour. Occasionally shake or stir to bring out the flavor.

I cold-brewed this last night. Really nice. This is a bit more vegetative than the other cold-brewed iced teas from Den’s, but, that’s alright. I taste a good amount of Mango too – not overly strong … a nice melding of the flavors.

Very nice … again like the peach, not an IN YOUR FACE flavor but its quite refreshing and just the right flavor for a hot summer day!

I had to go off on a variety of errands, which seemed like a good excuse to try out my marvelous new JoeMo tea travel mug that I got through one of the Steepster Select offers (via TeaFrog) and this cold-brewed iced tea from Den’s Tea. I’m so glad I did! All I had to do was place the little pyramid silk tea bag in the tea holder of the mug (which works for loose tea as well), pour in cold water and wait. Den’s Tea suggests an hour, but I was impatient and was sipping wonderful mango flavored iced tea in 45 minutes. The mug is a revelation. It is sturdy, cleverly designed, has a lift out tea strainer, and a mechanism that makes drinking out of the mug a great deal more pleasurable than most travel mugs. I highly recommend it. Here is the link: http://teafrog.com/teas/joemo-xl-tea-travel-mug.html

On to the tea! I was surprised. It was tasty, well-flavored, non-bitter and basically delicious. I didn’t think that cold-brewing would work that well, but it did. The tea has a creamy mango sencha flavor that went well with my errands. Also highly recommended.

Oooh! I have the travel mug from Teas Etc. that I enjoy, but I like the look of this one, too. Bookmark’d!

Also, I have no recollection of this on SS. Must have missed it. Humph.

It was either right before or right after the Soropot so I imagine you were in your little Soropot heaven fugue state. I think this is the best travel tea device I’ve ever seen.

Likely true! Ok, I think this is going to finish off my next round of tea purchasing. I’m going to try and be good and wait until next month. We’ll see how well that works.

Oh these are nice.

The tea bag looks so high-tech! It is filled with crushed-up, somewhat powdery green tea. It turned my water bright green pretty quickly. I tried some after about half an hour and the sencha taste was strong and lovely. But, the mango flavour really developed the longer this brewed. This tastes like the powdered sencha, with nice juicy mango in the aftertaste.

I refilled my Libre with water and am trying a second infusion. After half an hour, it’s much weaker but it’s really pleasant! Kind of more flavoured water at this point, but that’s okay. I think a second infusion would work much better if the bag was removed after the first hour rather than sitting in water for more like two and a half.