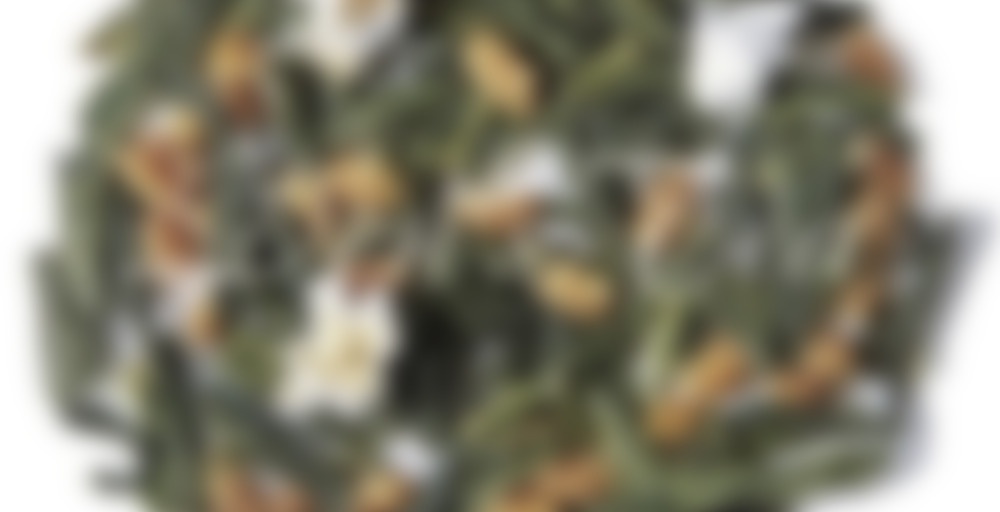 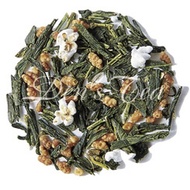 Tasting Profile:
It provides roasted flavor and aroma. Yet it has steady green tea flavor.

For a cup of Iced Tea: Put 50% more amount of tea leaves into a teapot. Steep as directed for hot tea. Once you brew it, put ices into the cup to lock in the aroma.

One of those days that can’t make up its mind: a little bluster, a little sun, a fair amount of raw wind that makes it rain yellow leaves in the backyard. Calls for an afternoon tea that’s savory, not sweet.

This is a (my bad) neglected little sampling of thin green tea needles with toasted rice popcorn in it. The grain scent makes me want to find a hay barn to spend the rest of the day in. More toasted rice flavor than greenness, but that proportion is perfect for the day and time.

I need some kind of email reminder to post tea logs, since I seem to be too busy to remember to do it on my own lately! Heck, this probably already exists and I’m not tech savvy enough to realize it.

After I weaned myself off of my week of herbal tea, I opened up a bag of genmaicha for my work/school thermos and I’ve been drinking it almost every day since then. That roasty toasty flavor is really calming to me (also I’m happy to report my eye twitch went away).

I really love Den’s. They are easily one of my favorite sources for Japanese green, and now I actually wish I’d bought more genmaicha in my last order!

I’d say this is a fairly standard genmaicha, though on the upper end of the quality scale. I’ve grown to like drinking it with supper actually, as it goes very well with savory foods (I guess that why they serve it at all the sushi places). It have a nice roasted, slightly malted flavour that melds well with the grassy, green base.

NIce and roasty toasty. Could use a little more of the base green tea flavor in contrast to the toasted rice aroma and taste, but still very enjoyable. A solid genmaicha.

I’m once again impressed by the sample sizes that Den’s Tea provides. 10 grams— that is nearly half an ounce! This was their sample of the month, and I happened to give in to their year-end sale a couple of days ago. I have enough left now for another few cups.

Well, no longer.
Actually, I should say, this ties; they are both delicious for their own reasons, but I can’t put one over the other. The fact that I enjoyed this tea as much as I did came as a nice surprise, because I was expecting to not really care for it (thinking “why would I’d ever order this, since Genmaicha Extra Green is available and delicious”?), but it holds its own.
I have yet to try a tea from Den’s Tea that I didn’t think was very good (ok actually Rose Sencha, but that’s because I’m not a big fan of that flavor).

The genmai in this isn’t too strong and the toasty flavor doesn’t mask the tea itself. And the tea base is delicious! It is really quite buttery-sweet, and I found it hard to stop taking sips. It was one of those experiences where a tea is so good I can’t stop sipping because it seems to induce thirst, and at the same time, I’m trying to figure out why it’s so good!

I love this tea. I drink it after lunch every day at work. It’s one of the nicest genmaichas I’ve had.

Drank this trying to use it up. More drinkable since the 1st time I tried it although I don’t resteep it which gives it a major down grade in points in my book

The second time I drank my Genmaicha Extra Green, I didn’t like it as much either. Strange.

I’m not sure what to make of this yet. I think I’ll leave the rating till next time.

This is only the second genmaicha I’ve ever tried. I definitely prefer the extra green to this, though this was nice enough. I can’t detect much of the satsuki.

I loooove genmaicha! This one seems pretty standard; not really wowing, but not bad, either. It’s a good tea for a hummus sandwich.

This was a nice beverage to drink last night. My boyfriend’s friend came over and cooked dinner with us. So we shared this! Delicious and nutty. I love the gentle sweetness and nutty rice flavor. Delicious and light.