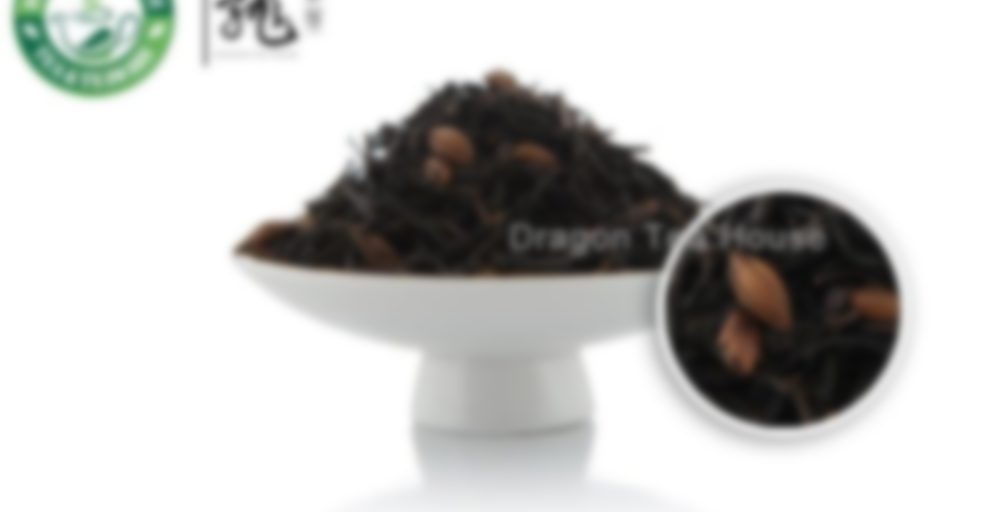 by Dragon Tea House
80
You

Quality Chinese black tea leaves mixed with roasted marley. It can be served hot or cold, but either way without milk or additional flavoring is best.

Iced tea-brewing method: (to make 1 liter/quart): Place 6 teaspoons of tea into a teapot or heat resistant pitcher. Pour 1 1/4 cups of freshly boiled water over the tea. Steep for 5 minutes. Quarter fill a serving pitcher with cold water. Pour the tea into your serving pitcher straining the leaves. Add ice and top-up the pitcher with cold water. Garnish and sweeten to taste.

YAY for tea from cookies this was a rather unusual tea from this morning.I’ve been busy organising things and um spending too much money on house things today. I enjoyed this one, though it’s different from other barley teas that i’ve had.

it’s roasty and sweet at the same time. closer to coffee than tea. it reminds me a little of some of the green teas that i’ve had when they’re a bit beany? kinda. overall just a really fun tea to try! thanks cookies!

nope not even kinda haha

This is definitely a unique one. :P Not like anything else I’ve tried.

Another one from cookies! I know she was anxious to be the first person to review this one, and it’s such an unusual tea and not what she expected. So I’m going to try it too and see how it tastes to me! The tea leaves themselves are rather small (I looked on DTH’s website to see what kind of tea it is, but all it said was “Chinese”) and they’re very dark, almost jet black in color. There are little shiny brown barley grains mixed in throughout, and they’re quite cute. Dry scent is rich and roasty and reminds me of coffee, with a surprising sweetness.

Wow, it smells even sweeter when it’s steeped up! There are also roasty and woody aromas here, and perhaps even vanilla? Such an interesting and unusual tea… There’s definitely a strong roasted grains flavor combined with a sweet woodiness that reminds me of bourbon vanilla. In the beginning on the sip, there’s something that tastes like green beans with bacon to me. There’s a little touch of roasty bitterness that’s very reminiscent of coffee, which I’ve found in the flavored barley teas I’ve tried as well. I wonder what the base tea tastes like by itself, as all the flavors here are rather unusual!

I was thinking the base is a Keemun, but I’m not so sure. I kind of want to get the plain roasted barley from DTH to see what it’s like on its own.

I would try it too. I actually have a sample of mugicha from Den’s that Stephanie sent me, will have to see how it is. :)

I hate being the first one to review a tea. It always makes me so nervous that I’m going to describe something wrong or… I don’t even know. But here goes.

This tea is certainly interesting. I really can’t decide whether or not I like it. But I think that mostly comes from the fact that this doesn’t taste at all like I thought it would. In my mind I have this idea of a genmaicha but with black tea. This isn’t really the case. It does have that roasty quality to it, especially smelling the dry leaf which smells like peanut butter or sunflower butter. Roasted nutty, seedy goodness.

But, surprisingly it tastes like pu-erh to me rather than black tea. Really earthy is the only way I can describe it. There’s also some thick raw sugar or sugarcane noticeable. It’s not bad at all. I just can’t wrap my head around the disparity between what I think I’m going to taste, and what I’m actually tasting. Hm, the more I sip, the more I think I actually like it.

Anyone want a sample of this one? Let me know I’m not crazy!

that sounds really interesting. I’d expect more of a burnt barley taste in my mind lol

I don’t think I’ve ever had barley on it’s own, so who knows. Maybe it is burnt barley I’m tasting.
Please do, Cameron, I want to see what others think.

This one is very interesting, cookies! I do taste a little bit of that roasted barley flavor that reminds me of coffee, and I did pick up on the same sweetness that you did. However, I found it very woody, which maybe have been what you described as earthy. Can definitely see similarities to puerh!