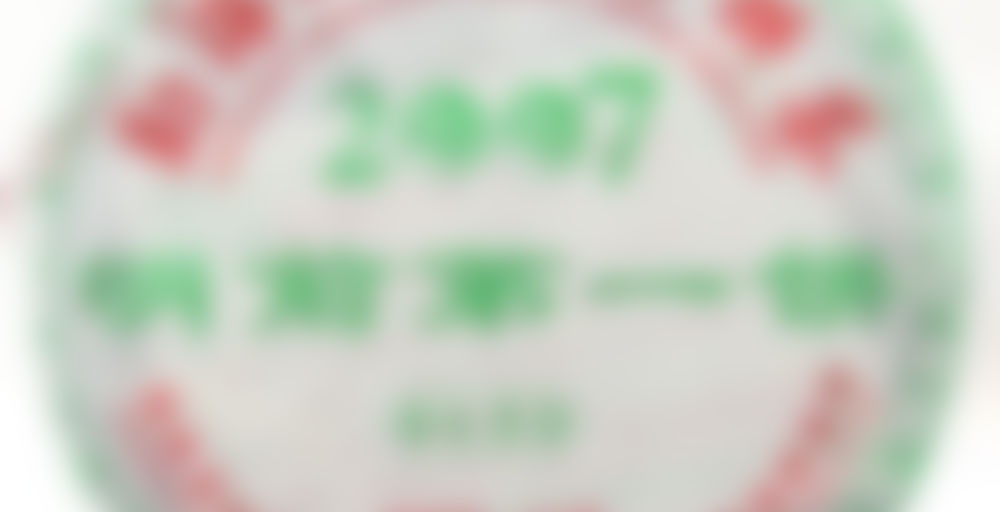 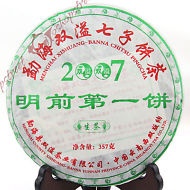 Surprisingly, for a 2007 raw, it tastes very green and vegetal to me, like I would expect of a 2013-15. It was light in color and didn’t have any of the typical mid-age sheng flavors that I expect. Definitely tastes of honey with a slight bitterness at the third steep. Good, lasting sweetness with a hint of fruit. I can agree with the raisin flavor notes, but I didn’t really identify a specific fruity flavor that I immediately said raisin..

I had to try out this tea after Allan left his review and got a sample (100g) size from StreetShop88. Usually I throw out a few infusions before I start drinking. I can’t go loads of infusions with my teas so that doesn’t bother me. I will always try a sip to see if I like it and if not I will move onto the next infusion.

With this tea it definitely looks like a ripe pu-erh! After getting it in the mail, I am just now getting around to trying it because I was thinking, it’s definitely a shu. I’m not always in the mood for a shu and so left it pretty long.

I used boiling water for the quick rinses. The leaves were packed so tightly and didn’t really come loose with those two rinses. I could see the brew was light like a sheng and that delighted me. So strange to see those dark dark leaves turn green and brew a light tea. On the first infusion I did 10 sec at boiling and tried it . I was sweet and no bitterness. Very light too. I think my favourite infusions were the first two when the leaves were just breaking up. The tea was light and sweet. After that bitterness really got into it so I threw out that infusion and reduced the temperature to 185. Some of the bitterness was still there but honey sweetness was definitely going. It was okay but not like the first couple of infusions. The brew became very dark too. A dark amber.

Next time I plan on starting off with low temperatures almost right away and see what happens with this tea. I’ll just write myself a post-it note and slap it on the tea package for next time. Does anyone else do that? I have post it notes on a lot of my tea packages and tins. I can’t always remember what the perfect brewing time is or what it was like last time. Most of the time I can’t even remember having it if a month or so has gone by since I last had it! Checking my reviews on Steepster takes time and most times I just like to get right into the brewing so the post-it notes serve me well.

Just made one more infusion and since there are sooo many leaves cramming my little gaiwan I decided instead of increasing the infusion to go backwards back to 10 sec. Yep, that worked for me. I think I used about 5 g for my tiny gaiwan and now I see that’s just too much. Next time I will go a lower amount.

I’m glad you liked it. Never thought of the idea of post it notes.

Notes: I ordered a 100g piece after reading a favourable review by AllanK.
Summary: Good tea, with a nice raisin sweetness and some throat stimulation, but short lived.

Dry leaf: Very high compression. Outside of the cake piece looks like good leaves; inside it is so compressed that it looked like different leaves.
Aroma is hay.
How Gaiwan: Grey smoke; some clay; fruit.
Wet leaf: Fruit; grey smoke.

I thought this was a short session for 5g.

Bought a 100g sample of this with my last Streetshop88 order. This is excellent tea. It was a little weak in the first two infusions. But that was my fault for not breaking up the cake. It is a very densely packed tea. It was sweet and smooth from the beginning, with almost no bitterness. I didn’t notice much in the way of changes in the tea in the first four infusions. Oddly enough, it seemed to get a little more bitter in later steeps. There were in the end some nice changes in this tea. I am going to have to order a whole bing of this tea as I is worth it. I only gave it eight steeps as I was already past my caffeine limit. Judging by the taste of steep eight I would say this tea could easily go fifteen steeps but that is just a guess. One negative thing about this tea was I couldn’t discern the sweet notes as specific notes, maybe that was me. Couldn’t quite call them stonefruits but maybe.

Confident to buy a cake after one sample – that’s impressive.

I want to buy it before they sell out.

I ordered some too.

I think you’ll like this one. I have been quite impressed with Streetshop88’s teas.

I have nearly finished my 100g sample, and have really enjoyed it, so I have ordered a cake :)

Glad you liked it. I just hope my cake is aging well. Not sure as there was no room in my pumidor and it is slow aging.