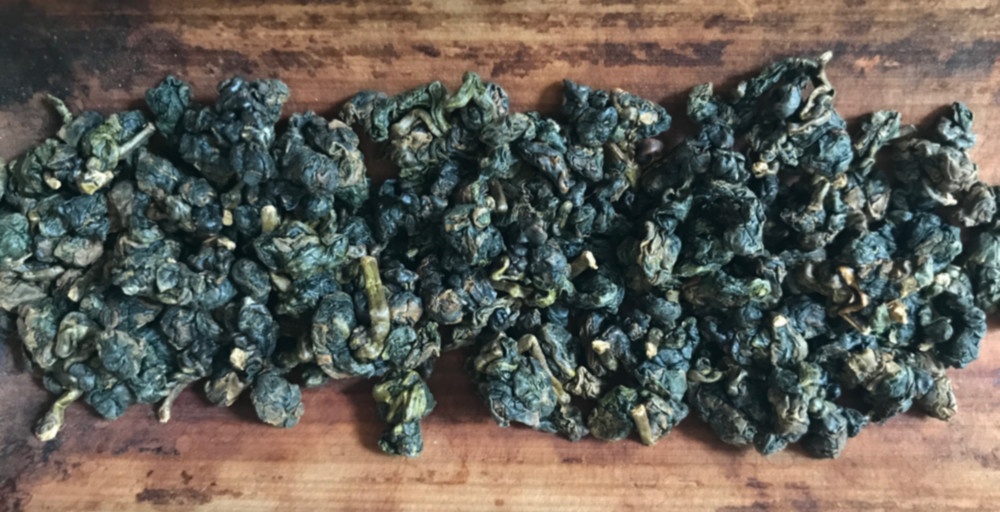 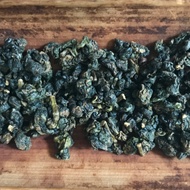 by Eco-Cha Artisan Teas
80
You

This has been my favorite tea from the eco-cha tea club so far! (I’ve been a member for the past year and a half or so.) It’s such a warm thick roasty treat. It’s mellow without being mild, deeply flavorful in a very relaxing sort of way. No bitterness, nothing challenging to it – it just makes me feel good all over. Gotta admit, I especially appreciate that it’s delicious when drunk grandpa-style at work throughout the day.

Fascinating material. Slightly looser than average balling on the leaf. About ⅘ of the leaf material looks heavily oxidized: dark-matte black, with just a hint of shine. The slight shine could be due to a very slight roast. The remaining ⅕ of the leaf material is green. Not jade green, mind you. Rather, the material is a matt green/yellow. This contrast of heavily oxidized, with comparatively green leaf, is really fascinating. It’s the first time I can recall seeing a wulong processed this way. Dry leaf gives off a very mild, roasted aroma. Steamed aroma is a typical roasted smell, with a hint of wood.

Brewed aroma is very faint. Some bakers spice, and a continuation of the woodsy roasted note. I must say, the leaves brew up in an absolutely gorgeous manner. The contrast of muted green and brown remind me of observing a forest. Tea liquor is a crystal clear, light gold. It has the look of a great depth. First sip reminds me of rum raisin. It’s got this slightly alcoholic, cinnamon, sweet raisin thing going on. Towards the back of the mouth, I get a slightly tannic sensation/taste. This tannic note provides a nice contrast to the comparatively higher notes I mentioned previously. Finish is long, with the tannic note starting to slowly dominate the palate. The tea liquor is thick. This is one of the few teas that I would call meaty. It’s worth mentioning, that this is a high energy tea. I feel more than a bit spacey.

With the second brew, I start seeing even more hongshui character. Tea liquor is a golden red. Taste remains relatively stable. Only noticeable change is an increase in Taiwanese red tea character. IE tannic sensation, slight bitterness, menthol like sensation in the throat.

Third brew changes things up again. The golden color of the first steep is only present in the top ¼ of the liquor now. The rest is a nectarine red. Interestingly enough, the aroma has gone in the opposite direction. It’s gotten very floral. In a way that reminds me of an unroasted jin xuan. Taste is moving towards the darker notes. There is some remaining alcoholic cinnamon, but it’s almost entirely in the finish now. A strong, dark chocolate note has taken over. Bitter like cocoa nibs. Beneath that is a lingering woodiness, and raisin tartness. A tannic sensation can be found in the back of the mouth.

It’s worth noting, that my head is entirely in the clouds right now. I feel a strong “lifted” sensation in my facial muscles. It’s euphoric in nature.

Fourth brew doesn’t evolve any. Which is okay. I’m enjoying everything this tea is doing, so I’m okay with it staying on its current path.

Fifth brew is somewhat lighter. Liquor looks like it’s transitioning towards the gold of the first brew. The ratios are now inversed. Now it’s ⅘ golden, ⅕ red. Aroma is very sweet, and mildly malty. Taste is also very sweet now. Almost all the bitterness is gone, and just a hint of tannic sensation remains buried in the finish. I’m a bit conflicted with this development. It is a smoother tea now, but that’s because it’s lost a lot of its complexity.

I predict the tea will continue to taper off from here. It might not have longevity, but this tea does show a lot of evolution of color, flavors, and aroma.