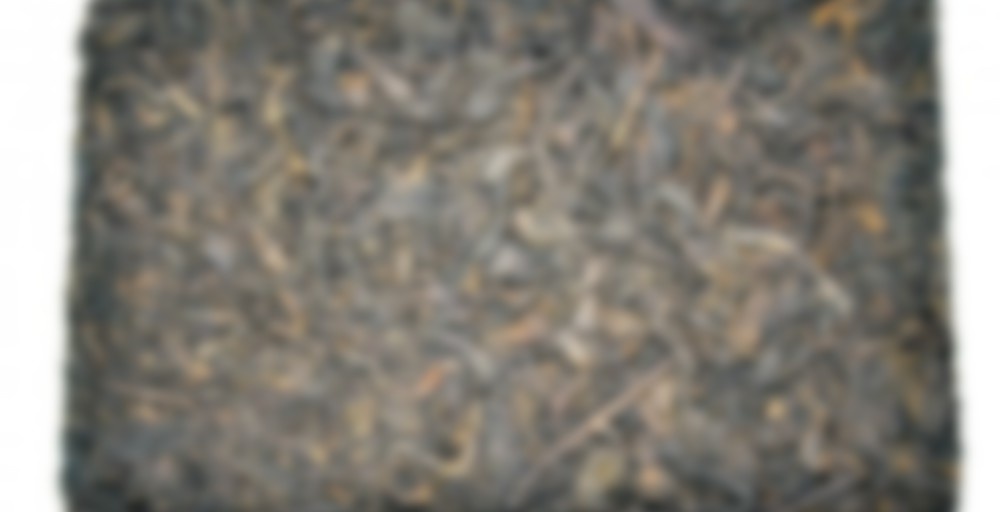 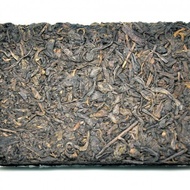 I tried this one a while back, but haven’t had any time to log anything recently. As I think back on the time I drank this, I remember being much happier with it than my notes seem to show. But I was listening to Queen songs on repeat while I drank, so I’m sure that had something to do with the discrepancy. :D

Overall this one was pleasant enough, but not incredibly exciting. I used the whole sample in a 100 mL gaiwan, which came out to be about a third of the way full. The dry leaves had a very sweet aroma, with that characteristic “old” smell very prominent. It also had this “seltzer-y” characteristic, like that smell of club soda. The aroma rounded off with undertones of avocado, old books, and this light sour smell. The leaves were very tightly compacted, appearing almost fused.

The wet leaves were powerfully earthy, very musty, with aromas of peat and dusty old books. After steeping, the leaves pretty much looked like mulch. And there were tons of empty stems. And I mean tons.

Transferring over to the liquor, that sour smell from the dry leaves became very powerful after the liquor was drained from the empty cup. Otherwise, the liquor itself smelled very similar to the wet leaves. The liquor appeared as this extremely red-tinged burgundy color that became nearly black during the middle steeps. It made this beautiful red ring of liquor around the lid of the gaiwan while it was steeping.

As for flavor, the first and second steep were probably the most interesting, at five and twenty seconds respectively. The taste was most predominately earthy. It really packed a punch. However, there were delicate traces of avocado and smoky notes, with a nice sweetness that rounded things out. The second steep was more or less the same, but with additions of peat, salt, and must. The mouthfeel was very smooth and mellow, and it left a spicy aftertaste that could be felt in the back of the throat. However, the body was quite flat for both steeps.

The third steep was the same as the second flavor-wise, but the avocado tones disappeared. The texture became a bit unpleasant—oily and slippery. This was probably the last interesting steep. I went for seven steeps, but I was reallyyy dragging it out (the seventh steep lasted 10 minutes) just to see if I could pull anything interesting out in the end. Instead, I received a taste that was like wet cardboard. Bleh. The mouthfeel became a bit intriguing. Tingling sensations grew in strength into the sixth steep, with a cooling sensation in the fourth. Other than that, however, I didn’t get much from this tea, leaving me a bit disappointed.

I have not been that much of a fan of Shu Cha (ripe/cooked pu’erh) until trying this one. I have said it before and I will say it again, the mysteries of pu’erh are never ending!

1. Wash.
2. A rich, musty smell and a dark amber color. Fairly mild flavor, but with some chocolate notes in the taste! Despite the “ancient” smell that many pu’erhs have (including this one), the taste has strangely made the flavor of my water even cleaner than when drinking it plain. This is a difficult quality to wrap my head around, as I have no idea how a tea can give off the flavor of fresh spring water, while adding such a dark red color to it. But that is what I taste. There is also a kind of nutmeg spice aftertaste, sort of like mexican hot chocolate.
3. Darker color, yet distinctively cleaner taste with this next steep. This is one of the most palatable Shu pu’erhs I have had yet. Though it definitely tastes better when the water has cooled a little. When hot it gives off a slightly bitter smell, like an unripe avocado.
4. An agave sweetness emerges with a hint of red pepper.
5. Sweeter still! This cup leaves a satisfying taste in the back of my throat, like after a filling sushi meal.
6. Suddenly, all the color has gone out and is now very pale. The taste is still fairly sweet with a hint of salty as well. The sweetness has come around to something that reminds of blueberries without the tartness.
7. Same.
8. Same, but less.

What about teaware/water setup used in this ?

As I have mentioned in earlier posts, I don’t use a temperature gauge when brewing tea for just myself. If I am holding a tea ceremony (an extremely rare event nowadays) I might break out the gauge, but usually I try and limit the amount of apparatuses necessary for my own personal tea enjoyment.
Now of course, I don’t the water to ruin my tea, so instead I use an estimation system. I typically bring my kettle to a full boil, then pour the water into a glass pitcher, where I will let it sit for maybe 2 minutes before black tea, 5 minutes before oolong, 8 minutes before green tea, etc. All of this is just approximate. For a shu pu’erh brick like the one above, I probably won’t let the water sit for too long, as I have been advised that pu’erh should be brewed fairly hot (around 212 F, which is where water boils).
My teaware setup for this brew was a Yixing clay teapot poured into glazed tea cups.