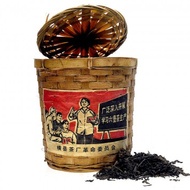 Liu Bao Cha is once the post-fermented tea like Pu-erh. The features of its ferment technology are pile ferment, compressed streaming, and longtime ferment.

Over 10 years storage and naturally fermentation made this tea mild, smooth and sweet. The first several infusions of the tea is in dark red colour like red wine. It tastes mellow, with a sweet-sour flavor and sweet after taste. It could be steeped for over 10 cups. The tea soup colour shade into bright orange and the sour taste gradually turned to refreshing lite sweet. The aged aroma still lingering in the cup even after steeped for 10 cups.

We recommend to wash and risen this tea for st least 3 times before drinking.

The origin of this tea is from Liubao, in the Cangwu county, Guangxi province, China.
Cangwu County, situated between the Tropic of Cancer (latitude 23 ° 27 ’), strong solar radiation, high temperature, rainfall Fung, average temperature 21.2 ° C with an average annual precipitation of 1500.7 mm.

Liubao tea falls within the same category as Pu-erh, for it is fermented longer than Oolong but less than black. The raw tea leaves harvested in the region are piled up, and exposed to a high degree of humidity for a certain period of time until the desired level of fermentation is achieved. Water is sprayed on occasionally to keep the environment constantly humid and the pile is covered by blankets. Such a humid and warm temperature condition controlled humanly accelerates the fermentation of the tea, known as ‘wo dui’ in Chinese. It is interesting to know all modern cooked Pu-erh teas are made in the same way.

After the fermentation, the tea leaves are dried, and sorted, now they are steamed and become softer. Then they are packed in wicker baskets, pressed in tightly around the edges and more loosely in the center to facilitate air drying, which takes a few months. The tea, like a Pu-erh, can be storaged for a long time. In fact it is considered as the best when it is covered with a light golden mold. The taste of Liubao is comparable to the taste of a cooked Pu-erh tea, earthy and smooth. Some exhibits a woody personality and sort of betelnuts taste. The color of the liquor is deep brown red. This tea is quite popular in Hong Kong, Macao and Southeast area of Asia.

I prefer dark teas and Liu Bao is one of my favs This one ranks right up there with most of the rest, 2 or 3 rinses is needed for this tea I learned that the hard way lol but after proper rinse and steep this one proved very nice Liu Bao. It was nice and earthy without tasting “dirty” with a sweetish after taste, smooth mouthfeel. Would have been great to have seen some gold dust on it but most loose Liu Bao I’ve had don’t have that for some reason. Great tea to me!

Thank you for the feedback! As for the gold dust. It normally happens on brick teas. Due the modern processing of Liu Bao or other dark teas. Tea bricks normally under process of –>Raw material selection—> Steam, Moistens Piling–>Compressing –>Baking (28 degree C for 12-15 days, the gold dusts start appearing at this step) –> Drying (35-40 degree C for 5-7 days)–>Packing and storage. The loose leaf tea normally will not go under compressing and the baking process is short. So you will not see gold dusts on most of the loose leaf dark teas. But loose leaves are easy to store without going mouldy and some longer aged loose leaves produces gold dust naturally during storage. It’s flavor will become even more spacial and tasty. That’s the fan part of aged dark teas, right?