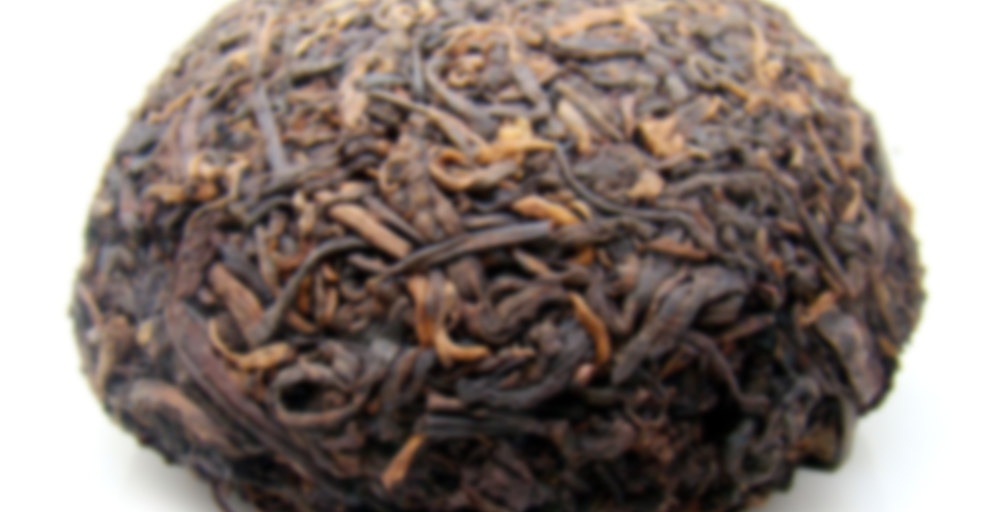 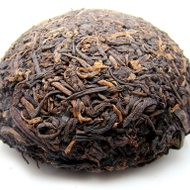 Interesting. When I had this today I did not realize it was the same one Cody had such a foul experience with. I did notice how easily the chunk separated. I used my usual western method – half the sample and 12oz water. I used 1/2oz to wake up the leaf but decided not to pour off. Added the rest of the water and steeped 1 minute. The brew was Tetley tea colored – basically looked like tea. It smelled like shu poo. The taste reminded me first of grape leaves then an old fallen tree in the woods. Then it was like an old leather jacket – not the horse tack I normally notice. It had rough edges like bark in the throat. I liked it.

The second cup at 30 seconds was darker and smoother. More refined leather and some kind of fruity and spicy notes.

Third at 30 seconds continued on even smoother and very sweet.

That’s all I had time for today. Definitely a different (and better) experience than Cody. I thought this was pretty good.

Well, I’m glad at least you had a pleasant experience. I’ll try the other half of my sample using something like your method and see if I get anything decent. Perhaps this shu just doesn’t play nice with gong fu style.

By the third cup it was a beautiful burgundy. Smelled bad. tasted good. Hope your second attempt is better and foreign object free.

The liquor color is something I can definitely agree with. That was a huge plus for this shu, when so many others are thick and murky and black. I’m not sure I can count the second attempt as better, but it was certainly much “cleaner” in multiple ways. I’m about to post another tasting note on it.

Sigh. This one isn’t working for me.

I started my session with a close inspection of the dried leaves. The sample was made of one large intact chunk from the tuo, so I was happy to see fully intact leaves and minimal chunks n’ dust at the bottom of the pouch. I was about to take my pu’er pick out and divide the sample in two, but as I took the chunk out of the bag, I realized it was quite flexible. Either the tuo was very loosely compacted or the sample really loosened up on its way over the ocean.

Yet, as I was pulling intact leaves apart, I noticed a very thin, black object. Thinking perhaps it was a stem/vein I gently tugged at it and the leaves around it so as not to break anything. But then I observed it continuing up and over the other leaves and it’s sheen made it apparent it was not leaf/plant derivative. Oh boy… I pulled it out from between the leaves and was left with a two inch long black stringy object tapered in its diameter. Hmmmm, hair or string? While both are generally considered to be “okay” if found in pu’er from what I’ve read, the fact it was in a sample and also present when processing (since it was within the leaves) seems to indicate some poor quality.

Well, in either case, I was going to taste this sample (minus the questionable object) and hopefully I would enjoy it so much that the prize I discovered would be rendered moot. Yeah, that wasn’t the case.

I used half the sample with boiling water in my gaiwan. Wash was around ten seconds, the first steep was fifteen. This is probably the greatest example of incorrect first impressions. The first steep was awesome. There wasn’t much to it, but there was this interesting nuance that I’ve never tasted before in tea, especially not in shu pu’er. It lingered gently on the tongue and roof of the mouth after a sip and passed in and out of taste during a sip. It was some delicate amalgamation of sweet, nutty, woody. There were also notes of coffee and I think cocoa. While it wasn’t incredible and was weak-bodied, it seemed to suggest these flavors would be enhanced or transformed. I excitedly performed my next steep at twenty seconds…

And got nothing. Ughhh it was so disappointing. One dimensional, weak flavor, barely any aftertaste, oily mouthfeel, and a dry feeling in the throat. Worst part was that the interesting flavor completely disappeared. Okay, maybe I didn’t steep for long enough. Upped the time to half a minute for the next steep. Meh. New note of apple and a more metallic aftertaste. Tastes kind of burnt. Still quite weak. There was also a bit of a sparkling mouthfeel, which I liked, but didn’t make the steep much better.

Okay, let’s bring it to one minute. Nada. 5 minutes? Nope, just tastes burnt. I probably would have received better results if I would have used the entire sample, but still…

So what did the leaves have to say? Could they explain this disappointing session? Quite so. The “leaves” were made up of about 20% blackened stem, 75% black halves of leaves that disintegrate with slight rubbing, and 5% greenish brown leaves that practically rip from their own weight. Actually, when I attempted (and easily succeeded) to rip one of these lighter leaves, the topmost membrane of the leaf face separated from the body of the leaf. Ew.

There’s a good chance that I won’t be drinking the rest of the sample. Maybe I just got some really bad fluke, which I’m hoping for the sake of the other Esgreen tasters on here. I’m anxious to see what you all have to say.

Hey Cody! That’s not uncommon.. though it is STILL unwanted. Much of the process in bigger or ‘mass’ producing factories use ’broom’s with thick black hairs to more the leaf around with out damaging much (could be worse with shovels although some use them).

I know it freaks you out to find this, but ‘foreign’ material is not that uncommon in all Puerh, but especially in factory made. Smaller hand made teas usually don’t have this but you could still find your usual human hair. If you find more than one or two things in a single cake then you might want to reconsider buying again.

Agreed. I’m not really freaked out by it, and it’s to be expected with the amount of processing involved. The rating isn’t based much on finding whatever it was. If the leaves would have been excellent with a taste to match, I wouldn’t have thought twice about the “hair.”

LOL. I agree. Well, I’ve learned the hard way (especially, but not limited to Pu-erh) that beautiful full leaf doesn’t equal best tea/best leaf quality. Especially with the aggressive and growing tea market. Everyone is making their own Garden plantation and making Puerh cakes.

It’s a shame for sure. And then you have all the “fakes” and counterfeit cakes being made. As far as leaf quality with this one, both the raw materials AND the processing seem to have been botched. One leaf had light brown growth/splotches on the undersurface, a good deal had holes in the leaf face, and nearly all seemed to have been burned. Size and shape were very inconsistent as well. I mean, I was expecting a blend, but I don’t see any ratio from what I got.

That’s unfortunate. It has happened to me. I felt like I was a victim of a scam artist. But hey, I was told the biggest truth once “Nothing will teach you about good Pu-erh like really bad one” :P

Indeed! Every tea is a learning experience, whether awful or brilliant or somewhere in between.

I feel fortunate that most of the time we get winners and not losers.

^ I feel the same. And I have to thank Steepster for being at least part of the reason. :)