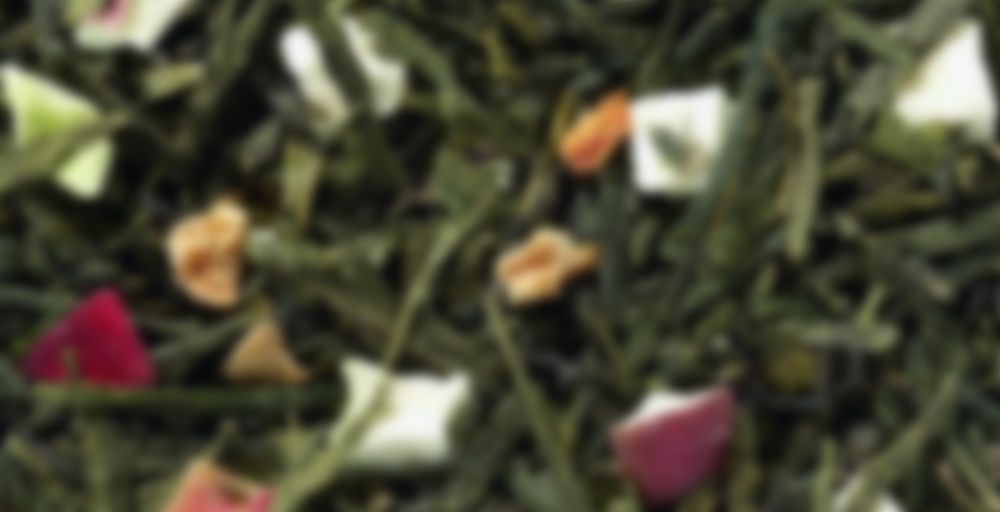 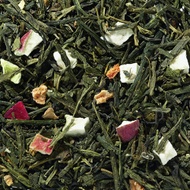 by ESP Emporium
73
You

Like an emerald! Cleopatra, the last queen of Egypt, loved the green fire of this exceptional gemstone. Now it’s time for you to discover the warm glow of the dark-green color in this select composition. It excels thanks to the refined combination of six precious teas, collected treasures from China, Sri Lanka and Japan. A unity in taste which glows with nippy kiwi, fresh green apples and juicy lime flavors to make this a very exclusive green tea blend. Go ahead and taste a very special gem. Select, rare, valuable: green!

Sipdown! This was the rogue sample from momo that found its way into my box of samples from Lynne-tea. Therefore, I finished it.

I was going to say that sadly, I didn’t really taste too much with this one… but it looks like I felt the same the first time I tried it as well. Ah well. Perhaps it’s a case of flavour lost during transport, or something. It does sound like a delicious flavour combo otherwise…

Amanda THANKS SO MUCH for this one!
It smells AMAZINGLY juicy, sweet, and mouth-watering!

I knew right away that the fruit in this was freeze-dried because of the way it plumped up when I added the water! All of that FLAVOR Compacted? Let’s see, shall we?

I like this. Those were my first thoughts as I sip! I can taste the sencha and it’s lovely! The kiwi kicks in first with that apple quickly stomping up behind it! I am very pleased with this kiwi flavor – because, I, too – have been looking for a true KIWI Fruit Flavor in a tea – especially in a sencha! YUM!

I also agree with Amanda. The apple is nice but it’s not overly identifiable as a specific apple, if you know what I mean!

It’ juicy and makes my mouth water! I REALLY like that! This one exceeded my expectations! Nice!

oooh this sounds really interesting. I hadn’t thought about kiwi as a flavor in tea. mmmmm

Augh I went to some friends’ house last night to play Cards Against Humanity (offensive/evil/awesome if you’re a terrible person game like Apples to Apples) and of course the house rules were winner of the round chooses someone to take a shot. Four shots and four hours of sleep later, I am not feeling so nice this morning and wishing I hadn’t made plans to meet a friend for Ethiopian for lunch. Of course I don’t have anything good for hot tea with me so I’m drinking iced tea before 8am. I’m already on my second glass of this because holy dehydration.

This brews up super light. It’s kind of worrying at first but it definitely has flavor. It’s not particularly green apple to me, but it’s apparent the fruit flavor is apple, with a bit of kiwi. I’m surprised it’s as good as it is because I’ve learned not to expect much of anything kiwi flavored.

The base tea is okay, it gets bitter way too easily which is tough when the tea looks like water even after 2 1/2 minutes. That’s really about the limit of this it seemed like, but the temperature might have been a bit higher. It’s easy to just drink down which I attribute to it pretty much just tasting like flavored water for the most part. I’m wondering if it really needs the space to steep in like a basket rather than a t-sac, but I wasn’t in the mood to strain. Next time I’ll try that though so maybe the green can really show through in a more delicious manner.

Why do I watch a sport that requires getting up early? At least its something interesting, two people I know were watching Australian hockey last night and I do NOT get it at all. Who seriously cares? One of said friends from last night is Australian and I’m pretty sure he doesn’t care about it. I guess it’s impossible for some people to get a life in the offseason or something. I ranted about this for half an hour before bed apparently but SERIOUSLY this one girl is STILL UP now watching this stuff.

I loooooove Apples to Apples! Most entertaining when played with people who are willing to have a bit of fun! (E.g. not my parents.)

Aha! I knew I’d heard someone talk about Cards Against Humanity before! The guy I (am dating??) mentioned it a while back, and it sounded so familiar but I couldn’t place it. Mystery solved :D

I brewed a large pot of this to try tonight, after loving ESP’s Lime Deluxe earlier (which my husband also agreed was delicious) earlier in the day.

This smells overly sweet and like chemical apple, sort of grassy too. Not horrible but not amazing either.

Flavour is sweet, the apple tasting artificial but that could be down the Sencha base which is grassy, perfumed and dry. I can’t taste any kiwi, though the after taste has a touch of tartness which I find with kiwi fruit.

All in all it’s a nice tea, out of the two I still prefer the Lime Deluxe (which is the only other ESP tea I have tried). My husband however really likes this one, he is apple tea mad. He says “If I like something it’s a 10 and if I don’t it’s a 1, there is nothing in-between”. So I asked him how he would rate this tea (out of curiosity) and he replied “It’s above average I think, so maybe 6 or 7 / 10”. I have to agree, it’s nice but not special and it is on the top end of average, so I rate 7.6 for this blend. Nice but I am not going to mourn it once it’s gone.