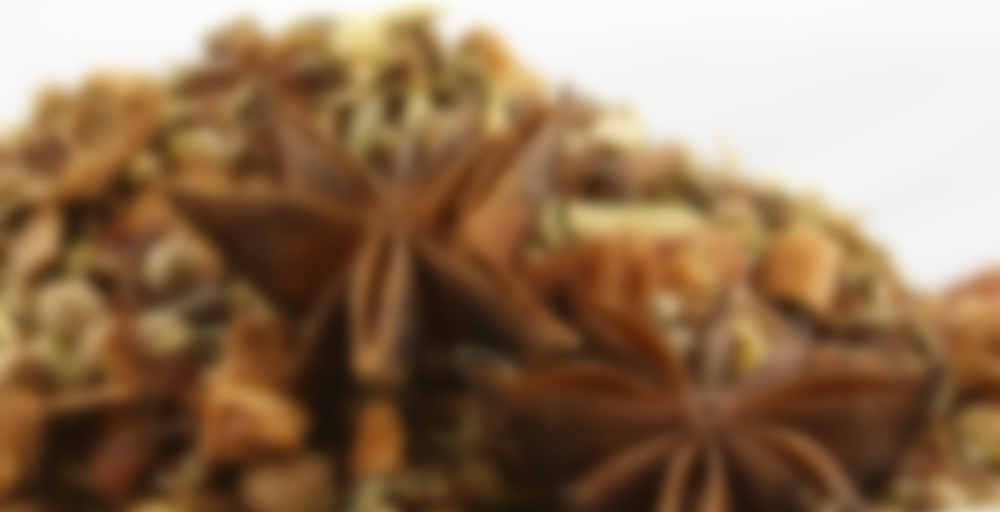 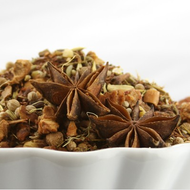 Updated blend as of January 2012! Sweet taste of almond magically blended with rooibos and chai spices. Smooth, delightful and a perfect compliment with dessert. Or, in place of dessert. Either way, enjoy!

Inkling Advent Day 21. There is so much cardamom in this, so I was expecting a ton to show up in the flavor. It’s slightly fruitier than I was expecting, and there’s definitely not as much cardamom, which I’m totally fine with. It’s also not a spicy chai. Sweetened with milk, I think it tastes pretty balanced and interesting. I’m enjoying it more than the majority of herbal chais, so that’s fun. I’m also enjoying the nuttiness. I’d definitely drink this again.

Although I’m pretty certain my sample pack of this rooibos chai was getting long in the tooth, the scent when I opened it was lip-smackingly, cookie-ish, sweet. I steeped it work, which always means neither time nor temp were overseen carefully, and ended up with a really nice afternoon cup that was more fruit and almond than spicy chai.

If you like warm chai spices and enjoy rooibos, this tea is worth trying.

I struggle with rooibos. I wanted to like this tea! The cinnamon/clove/cardamom combination was on point. I even liked the way the spice left a bit of a lingering tingle. I didn’t necessarily get almond from this, but I could have overlooked that too – it’s just that I can’t do the rooibos base.

sipsby advent, day 7*
(sipsby packages this in no particular order, so your order may be different than mine)

Red rooibos is yuckyuckyuck to me. I like green, though.

So many of the red rooibos teas I’ve tried have tasted like dirt to me! I need to look for some green to deliberately taste the difference.

I ended up brewing this today on December 8th, I’m a day late! I had an oops – I took a tablespoon and brewed a pot and poured it in my carafe, and ran out of water for my resteep, so stuck it under the keurig and hit the brew button to fill the rest of the pot with hot water and freaking coffee came out, not hot water! ARGH – so I shorted myself 27 ounces of this yummy chai! I got excited about it, just by the name alone :) My roommate is trying the coffee flavored tea tomorrow, as she says there is something called a dirty chai, which is chai tea and coffee – I’ll update it in the morning!

I was just thinking as I was reading your note that it might make a good dirty chai! How did it turn out? Did your roommate like it?

Shae, she said it was okay, but the straight tea with eggnog was better – I saw she had only a few sips – not her cup of tea :)

Ah, too bad. Eggnog is pretty hard to beat.

A previous reviewer says this is like David’s Tea forever nuts with cinnamon. That description is spot-on.

So for this tea I have to respectfully disagree with the reviewers before me. I felt that this tea delivered in both smell and taste. The smell of this one is my favorite of any tea I’ve smelled lol. If you’ve ever had Forever Nuts from DAVID’s TEA its very similar to that, minus the apples and heavier on the cinnamon spice. Its not a hot cinnamon though (thank God because I hate hot cinnamon). Its more of a vanilla almond cinnamon. Its not so much nutty on taste as it is sweet almond, but it doesn’t take it too far that it crosses over into “cherry” territory; because in that case I would not like it. This really is one of my all-time favorites, and now that I am pregnant I am excited to sip on it all fall and winter since it is caffeine free, so I can have as much as I want!

This one was a disappointment for me. It smelled like spicy almond deliciousness, but the flavor was lackluster: mild cinnamon and anise with hints of almond. I’ll have to keep hunting for a good herbal chai!

Decided to make this again and was disappointed. http://tinyurl.com/n9h9l6b

I didn’t so much get almond chai as I did spiced orange. A nice enough flavor to have from time to time, but something I already get from Fava’s Winter Spice. Seriously, the only difference I’m getting is a little bit of almond aftertaste.

I’m so sad. This tea smelled amazing and I wanted to like it :< That’s what I get for giving it too high of an expectation, I suppose.