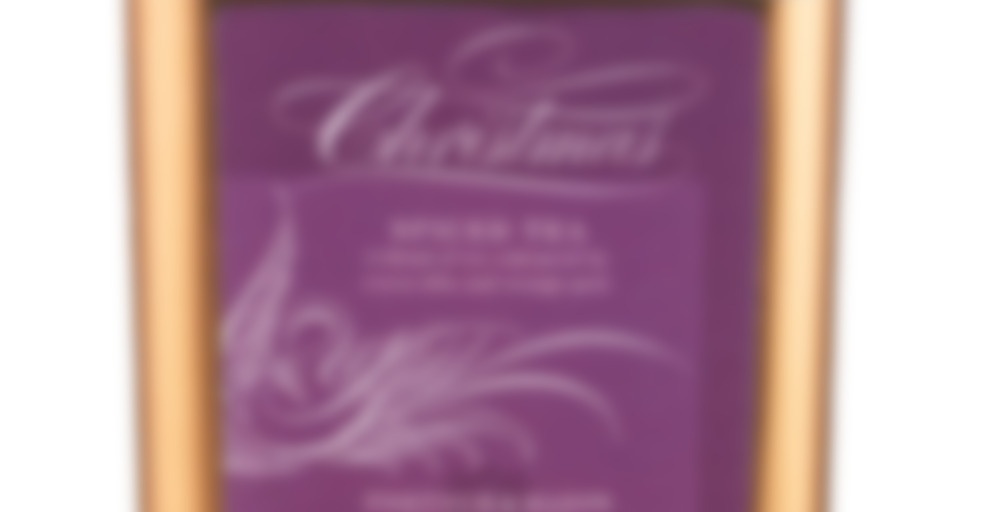 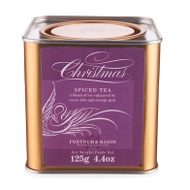 This speciality tea is an exclusive Fortnum’s blend, given a seasonal twist with cocoa nibs, orange peel and ginger. Try it at teatime with mince pies and Christmas cake.

This is one of my favourite teas. I grew up drinking Chinese tea black and strong so I’m not always big on the floral/flower mixes (looking at you David’s Tea). I do love me a good chai, and this tea even with its lack of distinct spices, reminds me of it. It tastes wonderful with milk, but I’ll brew it strong hot and cold without anything. The saffron is light and so is the hint of orange. Wonderful tea. I’ve been trying to make mine last a long time because I no longer have access to it.

This is a very nice blend. They definitely found the perfect mix of black tea base with spices . Even the wet leaf smell is festive. It reminds me of something in a Christmas past that I can’t quite put my finger on. Maybe hot spiced wine? I bet this would be lovely in hot spice wine! The gentle mouth feel of earthy tea leaves along with the citrusy notes, maybe tangerine?, and perfect blend of spices would make a lovely addition to spiced anything really.

Opening the tin revealed the blend which was decorated with a large star anise piece on the top. It’s so beautiful! The blend itself is a little festive as it has red safflower petals decorating a dark brown blend. It bares a soft yet spicy scent, like cinnamon and clove.

Brewing Parameters: 1.5 tsp in a large mug with boiling water for 3-4 minutes.

Once steeped a dark brown liquid with a red hue sits in my glass that bares the same generic spice scent as it’s raw form.

The first few sips reveal a dark base, wooden and thick with some bitterness with a delicate spicy after taste. Specifically clove, cinnamon and cocoa nib which is probably where the bitterness comes from. I imagine it would be reduced with a bit of sweetener.

The spice is not actually as strong as I expected, it’s more subtle against the black tea base. In a way it’s nice, sometimes ‘in your face’ flavoured teas are too much. There is also some dryness in the after taste though the spice lingers a while.

I would say while this was more of a subtle spice it was Christmas-esque and suited for all day drinking. I imagine a pot of this on Christmas morning would go down a treat! It’s subtlety may even win over some plain tea drinkers.

Sipdown (116 though I just went to Sil’s and as per usual, despite my best efforts, I am pretty sure I left with more than I came so this number is about to go up so thank you, Sil)

Once I got home, my mom asked someone to sit in the kitchen to babysit our dishwasher, which is making some strange sounds, so I said I would. Mostly I agreed to do it because I had to get my 2 milk servings in for the day which meant I would be down here making lattes anyways.

I decided to make one hot latte and one iced. This tea has been sitting in my samples box for a while now so I decided to give it a go and I thought the spices would make for a nice hot latte. Unfortunately my milk frothier got excited and ended up making most of the 8 oz of milk into foam so now I am sipping on 1/2 a cup of super concentrated milk tea while trying to not get my face coated in milk foam. Trying being the operative word here as I am not doing so well.

As for the tea… I used the entire sample I had from Cavocorax (I think!) and pulled out any anise pods I saw just to try and cut down on that particular flavor. Unfortunately I wasn’t super successful since I’m still getting a fair bit of anise in the brew. I’m also getting cloves though which is helping to balance it out/make it more tolerable. With that said, something in the way this came together is coming off a little bit like dirt. Not sure what’s causing it but obviously I am not a fan. I’m wondering though if that is because of how concentrated this is due to the milk issue. So, with that in mind, I won’t rate the tea but I probably won’t seek it out again either. Still, thank you Cavo for the chance to try something new!

Oh no, I’ve been neglecting my tea stash as of late. Must make more of an effort. I just had a massive mug of this without any additives and quite enjoyed the pow in this one. From memory, I’d say this is mainly orange and cloves. There are cocoa nibs in here? I’m going to have to try it again soon and pay extra attention.

The cocoa sounds like a lovely add-in. (I’ve got the raw materials to try this, but there’s a snoozing cat on my lap….maybe this weekend :)

This sample was from MissB (thanks!)

Smells like cloves, I’m feeling festive already. I think I prefer Esprit de Noël as my stock holiday time tea (I say, as I drink this long after the holiday season has ended) but it’s a nice, gently spiced black tea.

It’s grey outside and I’m wearing a knitted hat from a friend, and I have jeans on and a sweater….and somehow it’s supposed to get back up to 90 soon, but I’m really liking the cooler weather. Cooler weather is tea weather for me, so bring it on! :)
Dipping into my magical bag of tea swap wonders from Plunkybug, I decided to have this one, wanting something spicier and flavoured (Plunkybug, your teas have ignited a yearning for flavoured teas, and it’s so fun, because I thought I had totally fallen out of that! yay!)….
This is really, really lovely. A lot of the Christmas teas that I’ve tried have all been pretty similar, but I’ve loved them all, and this is no different…
Everything plays so well together in my mug without being too overpoweringly orange peel, or cinnamon stick…. just a really great cup. :D
Finished up my dishes and have a little bit of time to spare, so I’m thinking I’ll bring this mug over to the couch with me and play a bit of Final Fantasy 6 on my vita (is there anything better than Final Fantasy on a handheld??).

I got this one from OMGsrsly. It was nice, but I felt I should share, it too.

This came from OMGsrsly in our recent meet up. I opted to have this one this morning without really knowing the flavour profile ahead of time, but I sniffed it, and it smelled good…so I made this. Still not knowing much about it, I added milk and sugar, as I do with most blacks, because I never know how astringent or strong a black is til I taste it, and taking it with me while it cools means I add milk and then go. That said, I think that next time, I might opt for it without milk to see how it is. It was a nice, mildly spiced cup, but I feel like I lost some delicateness with the addition of the milk.

Thanks again for the sample!

Yes, it’s Halloween. I’m dressed as a viking, drinking Christmas tea and cleaning my house. Anachronisms, yo. I might go out to Costco like this, as I need to pick up a couple things. We’ll see how I’m feeling in an hour or so. Right now I just want to crawl back into bed!

So yes, a Christmas tea. I was going through my cupboard choosing things to throw out (yes, throw out) and give away. This was one that pretty much only had a serving left so I decided to drink it. Again, it’s pretty nice. Not my most favourite spiced tea, but pretty nice.