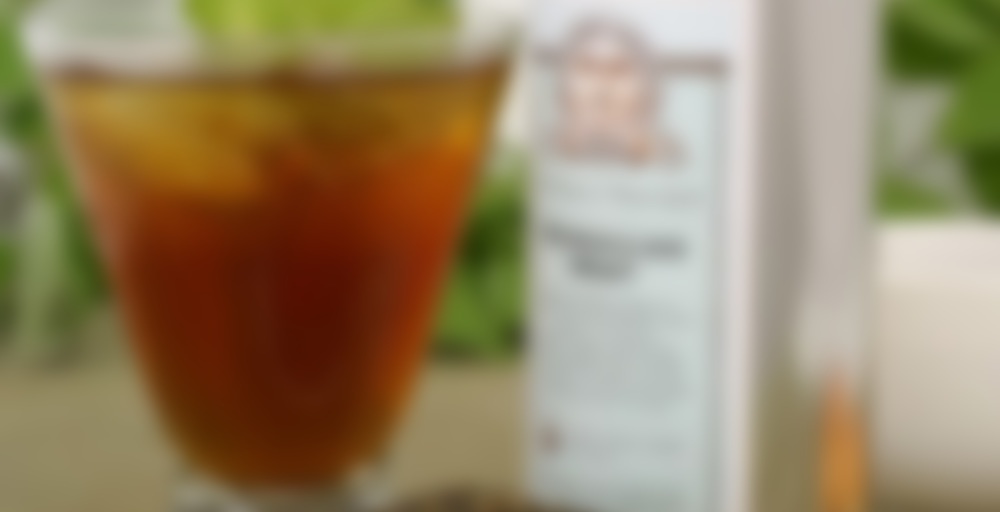 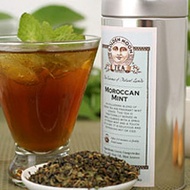 by Golden Moon Tea
68
You

Our Moroccan Mint offers you an enlivening blend of green tea and fragrant mint leaves.

This Moroccan Mint loose leaf tea is traditionally served in small glasses with a sprig of fresh mint and a touch of sugar. It is a delicious and refreshing Moroccan Mint tea hot or iced!

Sipdown no. 56 for the year 2014. A sample; another in the “not sure, try again” category after my massive Golden Moon order.

The steeped aroma is a delicate mint, and the flavor is pretty much as described in my original note. There’s a definite difference between this and the Vanilla Mint. This has a fresher, cleaner taste from the green tea base, with a rather buttery green flavor underneath. The Vanilla Mint is creamier and heartier from the black tea and vanilla.

I like this quite a bit. If I didn’t already have other green mints in my collection, I’d probably add this to the shopping list.

Okay, trying more Gunpowder… kind of. I used the whole sample even though I could have probably split it up between two cups. But I’m on a mission to go through some small tea amounts so really, I couldn’t have split this up. At all.

Smells sweet and wintergreen-y. I know it says to use boiling water, but no. Brewing at 175° I can smell the mint whoosh around so I’m just going to do the steep time on the longer end of the suggested range.

Okay, I’m trying to think of something to say about this and… I’ve got very little. It’s mint. With a little wet ash. And the more it cools, the less pleasant this experience is becoming. The mint tingle is nice but I think steeping the Gunpowder for 4 minutes in this kills it for me. Ick.
4.5g/8oz

Mmm, I liked this one. G liked it better iced. I couldn’t tell much about the green tea base, but the mint tasted like a blend of peppermint and spearmint. I would’ve preferred straight spearmint – what I remember from visiting Morocco – but this is good. I added sugar, so it was sweet and refreshing.

Me: Not a huge fan of straight mint. I usually like vanilla or cream flavors added. With that said it isn’t bad just strong but it could be how long I brewed it. I decided not to finish it and gave it to my husband.
Husband: I really felt it was a very minty delicious tea. Much better hot not cold. If however it was iced it would need sweetener. Otherwise delicious and would definitely drink it again and again.

You may be right. I will have to try it again with some sweetener. Usually I like to drink tea straight. Usually, the exception is with chai’s.

I can feel my tea choices lightening up as the weather warms. I’m looking up all kinds of iced tea recipes, fruit teas seem really appealing, and lo and behold, this afternoon I’m curious about this mint tea of all things!

Taken with a half teaspoon of sugar.

sip sip…not bad. Between what I’ve heard about gunpowder and not really caring for mint, I was expecting to want to throw this in the sink, but it’s ok. I’m getting the ashtray thing going on at the tail end of my sip. Nothing I’d ever seek out, but I have half of the sample remaining…I think I may mint it up further with some mint from my garden. That might take this atrocious ashtray aftertaste away (alliteration!)!

I was not a fan, either. I’m not sure why. I was lazy when I made my cup, though…I had planned to boil it with sugar in a pot on the stove the way legitimate Moroccan mint tea is made, but didn’t bother. I imagine that would help.

And real mint, of course. Can’t go wrong there!

My stomach has been unhappy-making (probably due to the stuff I’m eating to try and gain weight), so I needed some mint to help it ease up.

I almost smacked myself in the forehead after I poured the water into this because I could have tried takgoti’s Moorish Mint. I’m an idiot.

I’ve never had Moroccan Mint, but I have had peppermint tea and gunpowder. The sample is pretty and dark green, with lots of peppermint leaves (complete with static cling), and rolled green tea. All very visually appealing.

The smell… well, it actually smells like exactly what it is. The mint overpowers the smell of the green tea overall (but I’ve never found Chinese greens to be that fragrant anyway), but it has a nice, rounded aroma.

The cup is similar in color to a gunpowder – not green, but a honey color. The smell coming off of it doesn’t have any of the smokiness of the gunpowder, and the mint hits you full force in the face.

I actually really enjoyed the taste of this. It’s uncomplicated, but interesting. Definitely a nice change of pace from the normal peppermint that I tend to drink. The green tea peeks through with a hint of verdant sweetness, but it really isn’t the main player here. The mint is fresh, and it almost, but not quite, drowns out the tea. Its herbal edge is definitely cut by the green tea, which is nice. No astringency… and no smoke, surprisingly.

This, along w/ an oolong and Octavia’s Winter Mint was my 1st loose leaf purchase. Now that I actually know something about steeping tea, I can’t wait to try this one again. I’m thinking maybe 30sec steep.

I doubt you’d get much flavor out of this in 30 seconds… peppermint is something that you can keep steeping for 7-8 minutes for optimal flavor, and gunpowder doesn’t really get going until about a minute or so of unfurling.

Ricky, you’ll DRINK IT, cause you already have it in your GM sample. :)

You’ll have plenty of time for Moorish Mint in the future. It sounds like this was an enjoyable cup, and that’s what counts! I hope it helped your stomach!

I’ve nearly forgotten about my sample box, which is the cute box I had received from Golden Moon Tea! I wanted something refreshing and figured I should try this one out. It is raining out, and I burned a veggie bun in my microwave so it stinks in here! pole sana.

The scent is very strong. Very minty. I can taste the gunpowder slightly as an aftertaste. I didn’t particularly enjoy the minty/tingly/medicinal feeling I had on the tip of my tongue. Must be the mint oil… Anyway, good tea! I was tempted to try with sugar, but I didn’t.

Hooray! Glad to hear your throat got better :D

Having just had a not-so-nice time with Golden Moon’s gunpowder green, I was a bit hesitant when I saw that this was the base of their Moroccan Mint blend. However I’ve always been a fan of mint, so I thought it was worth a shot to see how the two got along. I went easy on the steeping, to minimize the risk of ending up with a drink that would be unbearably bitter yet breath-freshening.

I’m okay with it. The mint is there, front and center, and the gunpowder thankfully does not leave any acrid traces. I can definitely tell that the blend has been enhanced with mint essence, as it does not have the strong herbal flavor that using freshly dried mint leaves brings to the table. After looking at the tasting notes here from some of the other mint blends, I’ll try those as well, but overall this would be a good fall-back.

Golden Moon Sampler Tea #27:
So in my tea cupboard right now, I have Rishi Tea’s Maghreb Mint, and Adagio’s Casablanca Twists, both of which are riffs on the classic Moroccan Mint theme. I have yet to try the Maghreb Mint because I forgot I had it for a really long time and it got into a corner of my tea cupboard which is organized according to the highly scientific “shoving things in and leaving them there” principle. Now that I’ve found it again, I’ll be sure and try it! At some point.

In any case, I am trying to think if at any point I have had the original Moroccan Mint or if I went straight to the variations, and I am forced to come to the conclusion that, even if I have, I don’t remember it. So thank you, Golden Moon, for giving the opportunity to try the theoretical baseline for these other teas.

Obviously, the dominant taste here is mint. In fact, it’s mostly mint, I’m not getting much of the underlying green at all. It becomes a little more dominant as it cools, although it probably helps that I am done with my super spicy, super basily dinner. The stronger green taste makes the whole thing very vegetal, not sure if I’m a fan. Either way, given that I have a giant thing of straight spearmint, a normal sized think of Casablanca Twist AND a pouch of the Maghreb Mint, I am thinking there is just not much room for this in my life, even if I did like it.