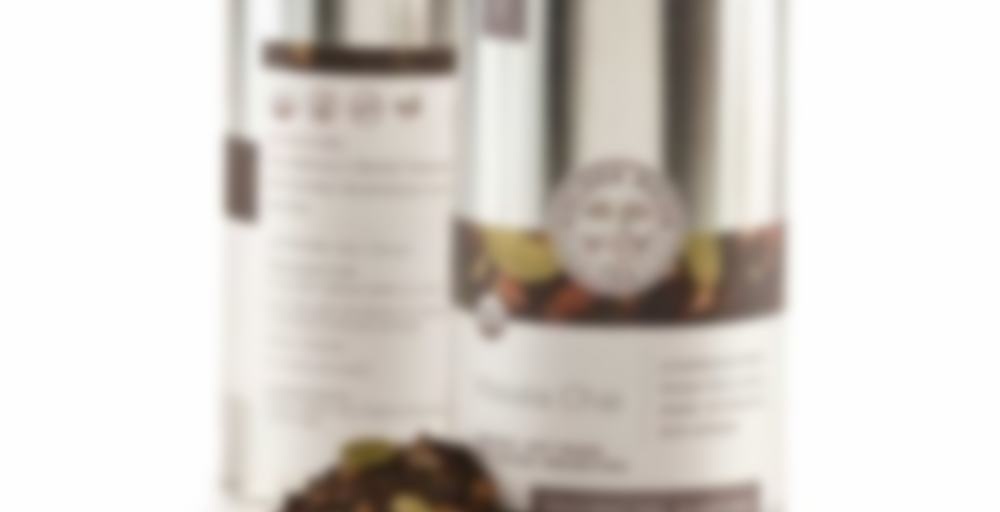 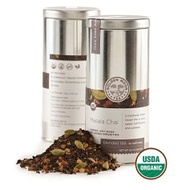 by Golden Moon Tea
70
You

An exotic, spiced tea from the Himalayas of Northern India. Aromatic and warming, natives of India often comment that the authentic and delicious recipe reminds them of home. Serve with milk and cane sugar for a rich treat.

This was in the Golden Moon sampler pack I received as a hostess gift this summer. Although other teas in that assortment were really enjoyable, this one fell flat for me. The flavor is surprisingly mild (more like a lightly spiced black tea than a true chai) and not very well-balanced. Oddly, though big cardamom pods are quite prominent in the leaf, the flavor is mostly ginger and cinnamon along with the assertive and slightly bitter base tea (probably a CTC Ceylon, by the look and taste of it). Milk smooths things out, but diminishes the spices even further. It’s drinkable, but there are definitely much better chais out there!

I received this tea as part of a sampler pack from Golden Moon. It’s not a tea I would have selected for myself as I tend to not be a fan of chais.

I don’t tend to like ginger in my tea but this ginger was subtle as was the cinnamon, giving just a slight bit of spiciness with each sip. I found that to be a nice balance.

I grabbed a bit of creamer and added it to my second steep after a couple sips plain. I felt it enhanced the flavor but this is one of the few chais where I didn’t find it absolutely necessary for me to drink the tea. That is quite the compliment, as, again, I don’t generally like chais.

While not a tea I prefer, I wouldn’t hesitate to recommend it.

I love chai teas, this one is subtle, maybe a bit too subtle. I would prefer more cinnamon, less ginger (I think). But overall, a good chai. I wouldn’t buy again but I will enjoy the rest of the supply I have.

The other reviews must be really old. This tea is FANTASTIC. Almost a little bit fiery, with loads of black peppercorns, sweet spices, & cardamom. Just ordered a 1 lb bag. My new favorite go-to hot tea for cool weather.

Solid chai. I’ll try it Western later, but for now I used little leaf going gong fu. The chai flavors are present but not overwhelming like other chai teas I’ve had.

This is my second favorite tea from the six I got from GMT recently.

Side by side comparison time! Note: this is cross-posted with http://steepster.com/cvasilevski/posts/302700

I bought this tea because I got a coupon code from GM for free shipping, and since I’m in Canada, decided to go for it. I’ve had a last smidgen of Golden Moon’s Kashmiri Chai in my cupboard for the longest time and been dreading finishing off my sample since it’s a lovely chai, but I hope that the new organic Masala Chai blend they’ve made to replace their non-organic teas would suit.

So, once I got this Masala Chai in, I decided to do a side-by-side taste test!

Both teas were brewed for 5 minutes in identical mugs using identical filters and a nearly identical amount of leaf. So here’s what I’m noticing about each tea.

The dry leaf: The leaf of the Kashmiri Chai looks larger and more intact, and you can definitely see whole chunks of cinnamon and pods of cardamom. In contrast, the leaf of the Masala Chai looks much more like a CTC tea, and while I can see the occasional cardamom pod, I see a lot of ginger and not much cinnamon. The smell of both varieties holds this up – the Kashmiri Chai smells much more of cinnamon and cardamom, while the Masala Chai smells much more of ginger.

The tea liquor: When they started brewing, the Masala Chai had a reddish tint to it and the Kashmiri Chai looked like more of a cool brown/umber colour. However, after a 5-minute steep, the colour of both teas was pretty much identical. The smell was fairly similar to the dry leaf: Kashmiri smelled cinnamon-ish, while Masala smelled like ginger.

Taste and mouthfeel: The Kashmiri Chai had a smooth sweet taste that coated the tongue and lingered long after the sip was over. I could taste the earthy base of the tea underneath, but could definitely sense the play of spices. In contrast, the Masala Chai smells and tastes strongly of ginger and malt, like gingerbread. Not quite a gingerbread cookie, but if you actually had a loaf of ginger-infused bread. I got a sweet potato note and a citrus note. I really can’t tell here what the base is, but it wouldn’t surprise me if the base were a Ceylon tea of some sort. It didn’t linger much on the palate, but was somewhat malty.

Verdict: I prefer the Kashmiri Chai tea, but considering they don’t make that blend anymore AND that this taste test was a sipdown of the last of the KC leaf, I’m out of luck.

Next, I might consider mixing this Masala Chai with some of Just Organic’s Just Charming Chai – the JO Charming Chai is too cinnamon-heavy, so they might complement each other really well. We’ll have to see.

I was looking forward to this organic chai. I am sad to say that the flavours fell flat though. The aroma of the leaf was different than any other chai I have experienced which, in a way, gave me a foreshadowing of how this tea would taste. It smell faintly of light cinnamon, but without any notes of cardamon, ginger, or even pepper.
Upon steeping it remaining only lightly smelling of cinnamon and black tea. Taste-wise it reflects black tea with a hint of cinnamon and ginger but that is all. A most disappointing tea. I will have to add some of my own spices or blend this tea if I intend to finish it. Sigh.
Someday I hope to find the perfect chai with lots of cardamon, a fair amount of pepper (but not too much), and a balance of the clove, ginger, anise, and misc. other delicious spices present. The search continues.

A quick note about the ingredients list — I entered the list, but it doesn’t include some of the options I needed to add. So, the ingredient is cardamom pods, not seeds, and the final ingredient is organic black pepper. Also, I’m not sure whether or not this is the same tea others have reviewed called Kashmiri Chai — in this sampler, the label says Masala Chai.

This is the second disappointing tea I’ve tried in my Golden Moon Tea sampler. I brewed it in a teapot and then added warmed milk, but I suspect it would have been better brewed on the stove and steeped in the milk. A couple of days ago, I brewed this using 1 tsp. per 8 oz. water, but that tasted very bland. This time, I increased it to 1.5 tsp. per 8 oz., and I guess there’s slight improvement. Still, I mainly taste cinnamon and cloves, and certainly not black tea. Also, I like for my chai to have a peppery kick, and this doesn’t have that at all — I’m shocked that black pepper is actually one of the ingredients.

I haven’t had many bad chais, and this qualifies as one of the worst. I would rather brew my own chai using my own black tea and spices than drink this regularly. Honestly, even Stash makes more flavorful bagged chai tea than this. I don’t think the spices are very fresh, as they are far less potent than some of the spices in my own pantry — and some of my spices are quite old. I’d considered adding some of my own cardamon pods, black tea and maybe fennel seeds to see if I could improve this — if I had more of this tea on hand, I’d definitely do that next time.

It’s not bitter or anything. It’s just…boring.