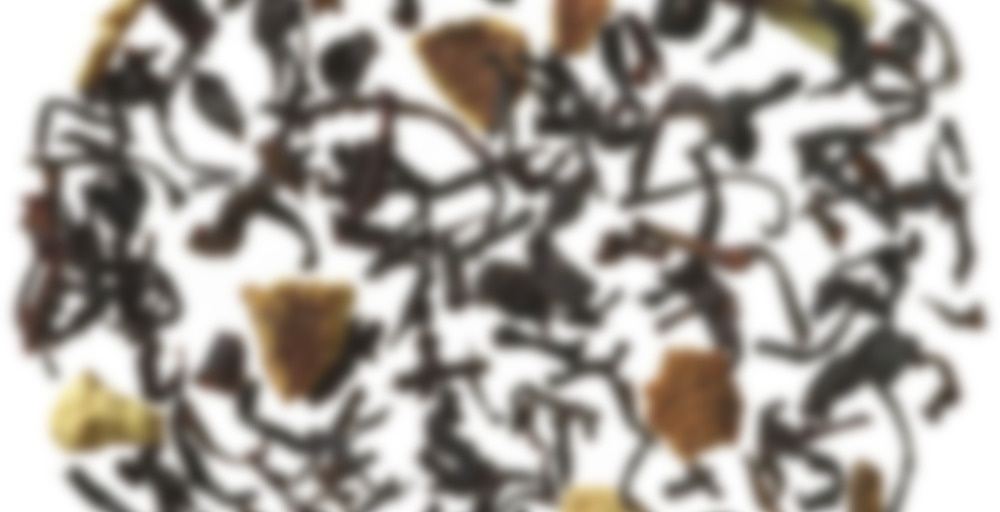 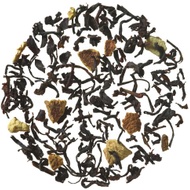 One of our earliest recollections of “good” tea was a supermarket variety of a Black tea combined with “the rind of oranges and sweet spice.” We’ve taken that recollection and “kicked it up a notch” by offering this premium loose leaf tea that’s even better than the original. Although we typically advocate drinking our teas without accompanying condiments, a touch of sugar truly helps to awaken the orange flavors in this popular blend. Try it and see if you don’t agree.

Wanted to get one in today while I had the computer to properly log it. I’m sad to see this one go, but I also felt silly hoarding the last cup worth when I really wanted to make it. I was really happy to receive this in the 12 Days gift exchange.

It tastes great today, though my first few sips were tomato heavy. Yeah, you read that right – I said (wrote) tomato. It’s my fault, I was being careless and stupid and I used the same spoon I was eating my Spiderman Alphaghetti with to test out the tea to see if it had steeped long enough. It’s all oily and kinda tomato-y now – but still good regardless.

This is what happens when I coop myself up in my house for long periods of time, with no regular internet access or music or anything to do with absolutely no one to talk to. I do stupid and maybe slightly insane things like shift all of the posters in the house over by a foot to see if they look better, and dip alphaghetti in my tea…

I was at 205 yesterday! Then I went to a mall. That is not the case anymore…

I went to a mall yesterday too, except I had the restraint to not buy anything even though I really wanted to stop at Tea Desire to get some Caramel Pu’Erh.

Also I laughed at the shifting of the posters. Did you move them back after deciding you liked it better at first?

Yeah, I moved them back. I have a lot of untapped time on my hands…

Hahaha. Awesome. It is like a scene from a movie :P.

A hint of orange with some sweeter spices in there (cinnamon, maybe? it’s hard to tell), this is a lovely tea that I’m quite happy to start my day off with.

Trying something new with Steepster today. Due to the snippets only showing the first certain number of characters from a community review, I’m sharing my thanks, my stories, my personal details later in my tealogs. Why? Because while I truly LOVE hearing about all of your lives, when I’m looking up a tea, I only want to read details of the tea specifically in those blurbs. Thus…

Thanks to TeaTiff for sharing such a lovely brew for Day Two of the 12 Days of Christmas Swap. This sipdown is a bit of a sad one, because this is the kind of tea that reminds me of growing up, and the kind of thing my Mom would make for me.

Ok really trying to catch up on teas now. I’m almost halfway through though, so that’s a plus! If I don’t include that I haven’t drank many of the secondary teas people included in the 12 Teas of Christmas swap haha.

This was really good, and I’m bummed I used it all up, but mostly because it was just the comforting flavor I needed when I drank it. It was like a tea hug. There’s just something about orange spice that feels good when you’re not feeling too well. I had added just a little sugar to it in hopes of giving it maybe some kind of spiced cookie taste which I enjoyed.

It also really reminded me of when we stuck cloves into an orange for Christmas at school. I have no idea why, because I remember making my mom let me make one at home and I FULLY covered that orange and then I think she never wanted me to do it again. But looking it up I found out a) it’s called a pomander and b) if you completely cover the surface of the peel with cloves it can last for months. I WAS THINKING LONG TERM, MOM.

Oh, I love pomanders – we make lots every year and hang all over the house. My fingertips hurt for days, but it smells so, so good – definitely worth it.

Day 2 of the 12 Days of Christmas from TeaTiff

A mildly astringent black tea with strong orange rind flavors (slightly bitter orange flavors). Nice cinnamon spiciness, though. The orange becomes more prominent as the tea cools, and becomes more bitter too. Not my cup of tea (pardon the pun).

Day 2 from 12 Days of Christmas (Backlog~been quite ill)

Hope you are feeling better soon. It looks like New Years is translating into sick steepsters day.

I’m going to have to go get me some Constant Comment. Brings back some pleasant memories!

This is the tea I had picked out for day 2 of the 12 days of Christmas. The description and smell of the tea sounded like a good holiday tea and the name was very fitting to my day 2. It is a black tea with spice and orange which reminds me a lot of the smell coming from the kitchen in the winter time when I was little. My mom would always boil water with orange peel and spices. The taste for me is a bit strong on the spice side. I would like to get more of the citrus flavor from this tea. With a little sugar I do get more of the orange, but would like it to be a little stronger. This is one that I can see my self enjoying every once in awhile, particularly on the cold winter nights.

Boiling 5 min, 0 sec
Yours I Like This
7 likes
1 comments
Edit

I really enjoyed this one :)

Day #2 of 12 Days of Christmas Tea Swap 2013. This tea smelled so good and it tasted just the same. There are times when I have been brewing tea lately when it smells soooo good, then when I drink it, it is not as good as it smelled. Well, this tea WAS as good as the smell. I did try without and with a touch of sugar, of course I preferred with. Thanks so much for this tea TeaTiff, it was wonderful!

Glad you enjoyed it !!

Backlog! From about a week ago, I think.

I had this at school, again super late with the 12 Days swap, and again, I did have a cup closer to the actual swap.

The issue with having tea in a mug at school is that, well, you’re at school. So that if you suddenly have to read the part of Regan in King Lear, you can’t also drink tea. If you are taking a Greek quiz… well, you can drink tea. But It might be frowned upon. And it’s pretty hard to set a mug down on a slanted desk. Tea gets left for a bit and gets bitter. horribly bitter. and gross. I only managed to have half a mug of this before it turned to the dark side; however I did get another steep out of it during orchestra, which was nice. However, I think I left my mug in orchestra, which is not so nice. Whoops.

This was kind of mixed for me. I don’t generally like orange flavored black teas, so I wasn’t really expecting to like this a whole lot. And I didn’t really like it. The black itself was nice and earthy, but the spices confused me a bit. However, it most definitely wasn’t horrible, and I did have two mugs of it.

I mostly wish I had my mug back.

Day 2 of the 12 Days of Christmas exchange, from TeaTiff! An orange and spice tea, though this is quite different than the bulk of the ones I’ve tried. Something about the spices. Sometimes spices can taste a little astringent/fake in tea, but that isn’t the case here. If you prefer spices to be the main note in your orange spice tea, without it tasting too fake, I would give this a try.

I brewed this plain for about 5 minutes. The smell of the wet leaves is very strong in citrus and a spice I can’t place my finger on.

The orange flavor is bright and fresh. The tea leaves have a little astringency, but are not bitter.

Thank you TeaTiff for a great sample & introducing me to a new tea company.