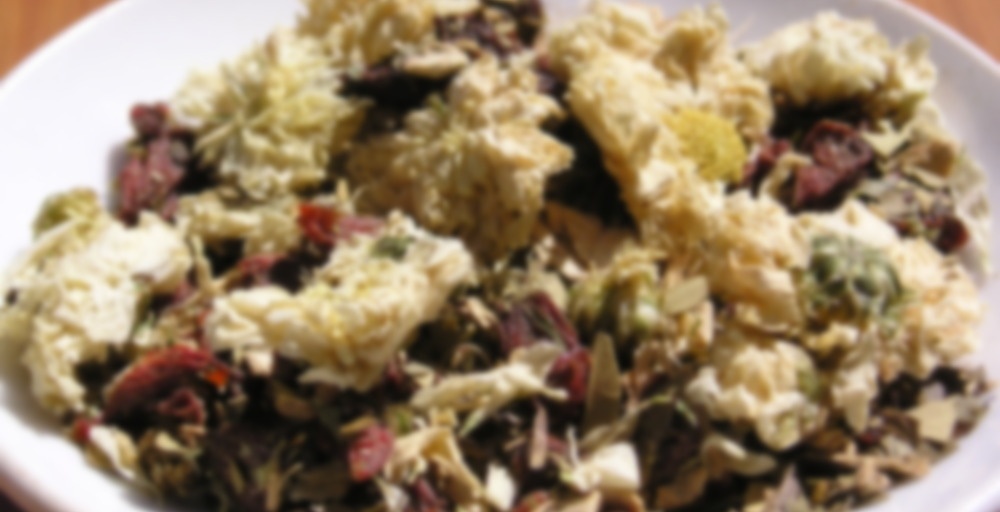 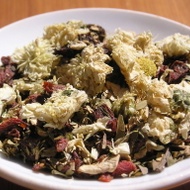 by Green Raven Tea & Coffee
73
You

A smooth, vegetal blend of botanicals high in antioxidants for relaxation and revitalization, in tribute of Sonoma County’s most biologically diverse watershed, the Laguna de Santa Rosa.

This is a Blend of nutrient and vitamin rich Yerba Maté, Goji Berries, and rosehips mixed with warming ginger and White Chrysanthemum for immunity enhancement and energy. Rosehips and Goji Berries contain high levels of Vitamin C and the rosehips add a slight crisp sour taste to help promote a rounded, light flavor and mouthwatering effect balancing the drier, pollen-like flavor of chrysanthemum and lasting vegetal taste of Yerba Maté.

Okay, so I don’t generally drink herbals or ever think about them so long as I have real tea on hand (I can’t imagine ever running out) and I dislike the concept of blending unless it’s to achieve a particular sought after flavor. What’s more, I really do not buy into hype surrounding botanicals in terms of health benefits – some herbals may have potent medicinal properties, but certainly are not going to affect people at the dilute concentrations achieved by steeping the dried plant material in water.
This is sort of an exception to these rules and it has become a staple for me as a gift to friends and family both for holidays and when they fall ill.

I created this blend a few years ago as a two-part exercise:
1) Create an herbal concoction that feels good to drink while sick and may impact the duration/intensity/effects of an illness in a perceivable way.
2) Achieve flavor balance using medicinal-grade infusible botanicals using blending to mitigate potentially off-putting flavors.

I made this task more difficult by deciding to only use material produced in a sustainable (preferably organic certified) manner, source exclusively from local growers, and insist upon freshness and cleanliness. And ultimately the components had to be cheap enough that I could sell the blend at a maximum of $20 for 100g while donating $1 per 100g to a nonprofit organization that contributes to education and environmental restoration. Suffice to say, I was shooting myself in the foot and chaining myself to a project that was essentially the bane of my existence for over a year.
Fortunately, through pestering some local highly regarded, licensed traditional health practitioner-educators I managed to get the contacts necessary to meet most of these goals! The big fat exceptions lied in the need to produce some sort of balance of flavor and feel instant gratification. I got around that hurdle with the two components that are not produced in Northern California – Yerba Maté and rosehips. Yerba Maté is not grown in California and I don’t think it will be any time soon, but the company Aviva sells good, well-groomed Yerba Maté that tastes a whole heck of a lot better than the stuff sold by local companies and is wildcrafted. I’m sure I can eventually get wildcrafted or organic rosehips from my county but for now I can’t find anyone who’s considered it economically viable, so Frontier Natural Foods Coop had to supplement me on that component that was really essential to the flavor.

My brother’s getting sick, so this is coming out of the cupboard. I don’t reeeeeally believe in the health claims backing most of the components of the blend, even though I sacrificed flavor in getting herbals that are chemically tested to have high medical potency (a couple have a “medicinal” taste)… but when I start drinking this right before I get sick and throughout an illness I do seem to have a shorter duration and it really feels good to drink with a sore throat and sinus/lung issues. Could be placebo, but while I’m iffy on blown up health claims I am a staunch believer in the power of relaxation and placebo to help against illness.

On my packages I hand out, I recommend 2-3g in 175ml 75-80 degree C water with a steep of 3-4 minutes… I heated the water a little too much so today I used 10g in 420ml 85 degree C water for 2 minutes in a glazed ceramic teapot. After tasting, I actually added 30ml of honey before drinking it down. It can’t really handle a lot of sweetener and is naturally sweet to begin with, but people do like to add honey to tea when they are sick so I made a point of making sure this tasted good with a touch. Consequently, I tend to actually add a little when I’m going to drink it, where I’d normally balk at the idea. Hey, if you’re going to break nature, might as well go all-out (insofar as still keeping it loose leaf – I will not fall prey to the bag).

Dry mass is not homogeneous in neither size nor color. Downside to using whole flowers from the Chrysanthemum is you need to sort of stir while scooping or shake the container first to avoid smaller bits settling under the flowers. Works much better when I blend this together after pulverizing the flowers, but it doesn’t look nearly as nice and the petals sort of take over and don’t mix easily. Goji berries look dusty since they are cut before blending and are sort of sticky – they coat themselves in most of the small bits of the mixture. Sort of hard to make out the ginger bits except for the shredded hair-like fibers sticking out at odd angles. However, when it comes to dry fragrance, ginger is king. Really, the fragrance is basically only ginger with a little herbal spiciness added to it. The wet leaves are really a hideous mess and smell sort of like a mix of herbs used to season fish (um, minus the fish). They sort of clog the spout of the teapot and don’t play nice going back in for a second steep. Sort of discourages subsequent infusions, which is unfortunate since the first brew always leaves me wanting one more and I usually prefer the second. A third infusion usually requires a 5 minute steep and is forgettable compared to the first two. Liquor is hazy yellow and smells somewhat sweet. I wish ginger didn’t make it hazy, but it’s worth the ginger’s influence on flavor.

Before adding honey, this is already fairly honey-like: sweet, pollen-like, full bodied, and even has a slight amber color to the base yellow. The flavor of this is all about mitigating the tang and herbaceous phenolic qualities of the Yerba Maté and White Chrysanthemum. Just to point out – it has no smokiness at all, just the somewhat toasty quality of Yerba Maté. I really can’t stand Yellow Chrysanthemum and dislike the twig and dust of most Yerba Maté and feel smoked Yerba Maté just rubs lack of quality in the consumer’s face. I used whole flowers from much sweeter White Chrysanthemum and the twig content of Aviva’s Yerba Maté is less than 5%, plus I sift everything before blending. The seedless rosehips really act as mediator with the light sour note they bring to the table. It infulences flavor and mouthfeel, causing a mouthwatering effect that works really well when coupled with the sweetness of the Goji Berries (I cut these to enhance this effect) and the somewhat overripe stonefruit aftertaste they have. Ginger root is a big player in the mouthfeel and aftertaste – savory and warming. Doesn’t bring nearly as much to the aroma as it does in the fragrance.

One of two herbal blends I let live in my cupboard.
I can’t justify a high score, but it is tasty and really satisfying to drink. I just used my brother being sick as an excuse to brew it. He got an ounce to “try” it while I had a full mug.