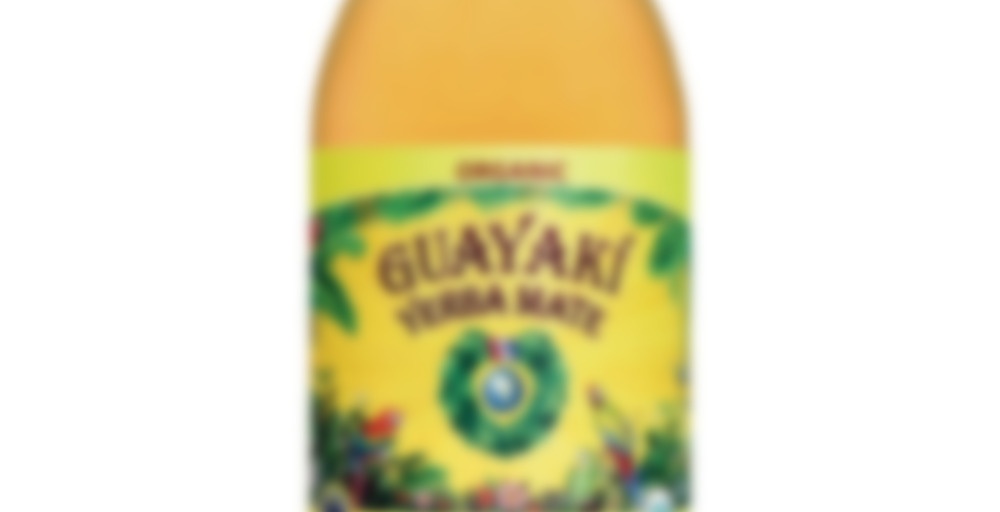 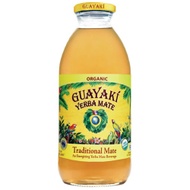 Finally, an invigorating ready to drink mate that tastes great! Each Guayakí Organic Yerba Mate bottle contains caffeine levels comparable to a cup of coffee, however, the stimulation is balanced by mate’s natural theobromines and theophyllines as well as other restorative nutritional content. As a result, drinkers feel a sustained energy, clarity of mind, and the general well being characteristic of mate. Grab a bottle before any physical activity or going back to the office, and experience the green energy.

I picked this up at the healthfood store – I’ve tried hot mate and thought it decent but I’ve never had it iced. Apparently it’s quite a popular way to drink it in South Amercia, though I’m not sure if they bother with all the sugar that’s in this.

And sweet it is – there’s less sugar in it than in bottled iced tea or pop, but 20g of sugar is still a fair bit. I tasted most of the sweetness at the start of each sip, as I swallowed it took on a herbal, sort of woody taste. It left almost a smokey aftertaste in my mouth, interestingly.

It’s interesting and I’m glad I tried it for variety, but it’s not going to be my go-to cold drink or anything.

So, I went to the supermarket today with someone I know, because she doesn’t have a car, and she needs someone to push the cart back to the dorms for her. I didn’t have anything better to do anyway. She buys a lot of stuff at once, and I’m more prone to going to the market once or twice a week on bike, and getting small batches of food. So I got an issue of Newsweek, A bunch of bananas, and I noticed this tea, so I grabbed it to.

Initial thought upon sipping this – it tastes like Lipton’s. Perhaps I haven’t had a cup of Lipton’s in a while, but the taste seemed rather similar – better, though. I think what did it for me, is my memories with tea when I was younger, when my mother made it for me when i was sick. It was a bag of Lipton, with sugar and lemon. (A small note – she still drinks it that way, though I’ve tried to open her to good teas.)
So, I checked the ingredients, and – lo and behold: Evaporated Cane Juice, and Lemon Juice. I think it was those two ingredients, mixed in with the fact that this brew has such a light flavor – none of the peculiar, arguably unpleasant, tastes you get when you brew mate yourself. I’m assuming they don’t want to scare away a potential market that can’t handle weird, strong tastes.

In general, I like it. Not something I’d pick up when I was craving mate, but it’s a nice alternative to soda to keep around – well, it would be, if it weren’t five times as expensive. But, maybe for someone that’s an addict to getting grandesupermochafrappacappaccinoextrahotextrafoamwhippedcreamplease coffee at Starbucks or something, this would be a healthier outlet for the money.
It’s a tasty brew, and maybe worth picking up a bottle every time I go to the supermarket – five or ten bucks a week won’t kill me.

A good mate for sure. I favor the hot mate that you brew yourself, but this bottle is comparable in that you can expect that same deep, earthy flavor. If you are on the run and need some quick energy, a bottle of Guayaki is a good route to take but I wouldnt give it an A+

This is SO addicting. I’m kind of sad it’s $3 a bottle on campus but whatever. It’s worth a treat now and then. It’s subtle and sweet and has a deep mate taste as well, it’s not sickly sweet. It just has a deep, robust, earthy flavour you expect from a roasted mate. My favourite.