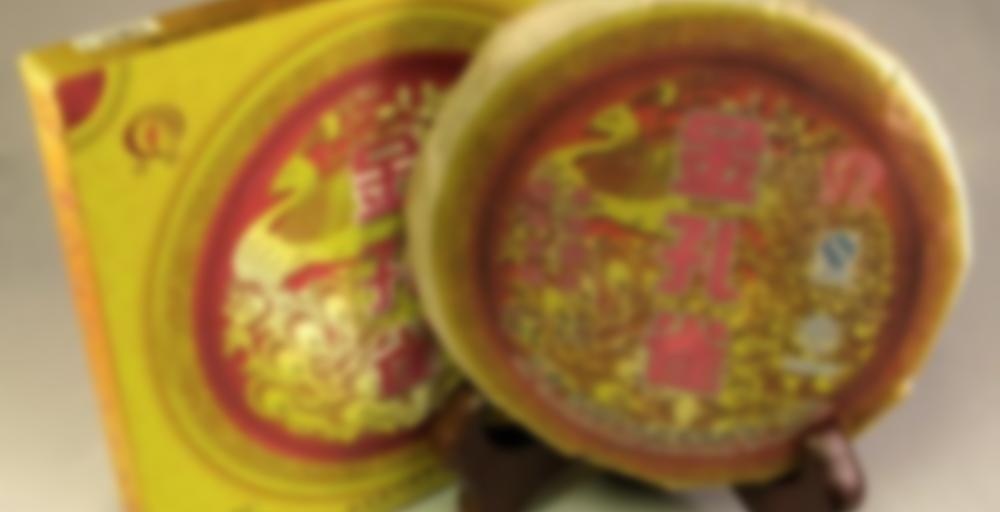 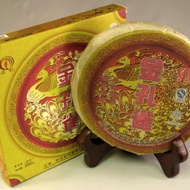 by Guoyan (Mandala Tea)
81
You

Sweet, earthy and easy like a Sunday morning. A nice ripe production from Guoyan. Gong ting (high-quality, small leaf), aim for shorter infusions in the beginning. 200 gram cake in box.

Thanks mrmopar for this nice Puerh Sample!

Yesterday someone said in their review that it seems that overnight the trees had turned color without them noticing the change. Blink and it’s Autumn!
I agree! When I lived in California the seasons didn’t change as dramatically as they do here in Colorado.
I was just looking at the forecast this morning. 82 today dipping to 28 tonight (Obama and Romney better have Jackets in Denver) and on Saturday the daytime will be 37 degrees (that’s an almost 50 degree drop!). ‘The times they are a Changing’.

One September I went to visit my mother-in-law Selma in Fairbanks, Alaska and drove way out along the Pipeline towards Valdez. After you pass the Air Force Base around North Pole Alaska, you see few people or cars. After about an hour, if you pull to the side of the road and get out, there is a panorama of golden trees UNBELIEVABLE and not the sound of ANYTHING. No birds, bugs, people, cities or cars. Total quiet. (The birds have gone South and the animals are hunkering down for the Winter which would come within a week or two.)
On the return drive, as the night sky turned black, the Aurora Borealis lit up the sky with an iridencent green light show. Again, stopping and getting out of the car to hear the siren sound of the sky and see the amazing movement of light that only is visable twice a year.

The color of the liquor for this Shu Puerh was first a golden honey brown and thereafter a clear dark red-brown.

Although I love to smell wet leaves, I didn’t find this to be a extremely potent or strong smelling Puerh. It was just a mellow, easy scent that was tame, a little earthy and pleasing.

After one 30 second rinse, I kept steepings at 30-45 seconds which was more than enough time for a rich broth.

The lightest (and first) steeping was like honey and Bing cherries with a light spicy finish. There wasn’t any earthy flavor or bread taste. I did find the sensation to be wet, not juicy.
My mind went off to thinking about water and then I came to my senses realizing how odd that was.

I poured another cup. This was more like the Puerh’s I was used to, like digging into rich, dark and chunky premium potting soil.
It tasted juicy and extremely smooth, becoming thick at the back of the palate.
There was something sweet about this Puerh. A cherry flavor and a creaminess during later steepings that I had not come across often in Shu’s. (I thought I was wacko about the cherry flavor but I tasted this tea over again the today and I’m convinced, though the Bing cherry taste is elusive.)

The other illusion that I had with this Shu was water.
As I sat sipping one round after the other I began to tea regress. Have you ever felt like tea is your shrink taking you back to your childhood? Well I have.
I thought about a night sitting on the beach in Santa Cruz, CA all alone. It was one of those starless nights when all you could hear were the waves crashing like thunder. Now and then, there was a glimmer of light from a wave but nothing else as I dug my toes deep into the still warm sand. I must have been 16 or 17 years old and a real dreamer. Fearless and full of wonder.
An older guy in his 20’s that I knew came along, sat down next to me and we began to verbally make up poetry in the dark. He said a line, then I made up a few, then he made up some more. A perfect romantic experience in the purest sense.
We never spoke again.

Tea can be a beautiful moment like that. Like a poem or a crashing wave.
Some are an experience that lingers for a little while.
My favorite ones are the tea’s you remember forever.
And some, well not so much.

This one was better than many I’ve had and will linger.

I have always wanted to go to Alaska. Someday….

I lived in Alaska and feel blessed to have witnessed the golden yellow of the birch during the fall and the wonder of the Aurora, as it sounds like you have. It’s great to hear someone else share about a few of Alaska’s many wonders.

Wow those photos take my breath away!
Fall is slow coming here, but I hear it gets beautiful! I’ll take some pictures if it proves true :)

Good….love to see peoples pics!
SimpliciTea- Where? The Birch is so bright gold it almost blinds you. I went back the end of November when Selma passed away and it was -20 and never complete daylight. Very dry in Fairbanks too. Loved Caribou Sausage!

Beautiful pics Bonnie! I’m supposed to be going to Alaska next summer and I would love to see the Aurora Borealis!

I lived in Fairbanks and traveled all over the state (including going to a few villages in ‘the bush’). The tundra, a little north of Fairbanks, is absolutely incredible to behold in the autumn: the blueberry bushes (and other very small bushes) that carpet the floor of the tundra turn almost any color imaginable and are set against various shades of golden leaves which are in turn held up by birch trees clothed in chalky-white bark, and if your lucky there’s even a snow-capped mountain in the Brooks range in the distance (I think the range is called the Brooks). I’ll never forget it.

Obviously, I loved Alaska. Thanks for asking. : )

Invader- The Aurora Borealis is best viewed in the months of Feb., March, Sept. and Oct.. http://fairbanks-alaska.com/northern-lights-alaska.htm (watch out for mosquitos in the Summer before September, be prepared!!!)

I would love to see this in this lifetime!

Those pictures are beautiful. Is the picture of the Aurora at Chena Hot Springs (I think it’s about 25 minutes outside of Fairbanks)? That’s a hot spot (pun intended) for viewing the Aurora Borealis, away from the city lights, and all. And, yes, the mosquitos really are bigger in Alaska.

bonnie you are a dear and i am glad you enjoyed this! a dib for garret and mandala for this wonderful tea!

SimpliciTEA- I didn’t take that picture, I have only a few original Alaska pictures because my ex-husband has the rest on his computer and it’s been hard to get them from him. The link above has some Chena Hot Springs pics. That photo is on Wikipedia and you can the video if you go down the page to the right. I saw the Aurora outside North Pole Alaska which was quite dark. When I left Alaska a week later,I saw the Northern Lights again from the Airplane. That was cool! The Moose and Fall pictures are mine. The 2 going towards Valdez (mountains) are where I traveled but not in the Fall.
The tundra with the purple, red and green was gorgeous!

Thank, Bonnie. I appreciate your bringing this up because it brings back lots of wonderful memories for me. I’m glad you had a chance to view the amazing colors of the tundra in autumn as well.

Tandem Poetry on the boardwalk, now THAT’s my cup of tea! Beautiful review, as always, Bonnie!

I got some of this one with my last mandala order, & enjoyed multiple steepings of it late yesterday afternoon. When I have students coming & going, I enjoy setting up a yixing of something I’d like to drink, so I can just keep adding water, rather than having to pick out another tea over & over again. I didn’t really take notes, & the main things I remember was the aroma of a well composed cedar forest (or some other wood), & the flavor was delicious, but again, I don’t really remember much about it, although I remember it being sweet, some fruitiness, & creamy at times, & most importantly, I DID enjoy drinking it! Again & again!