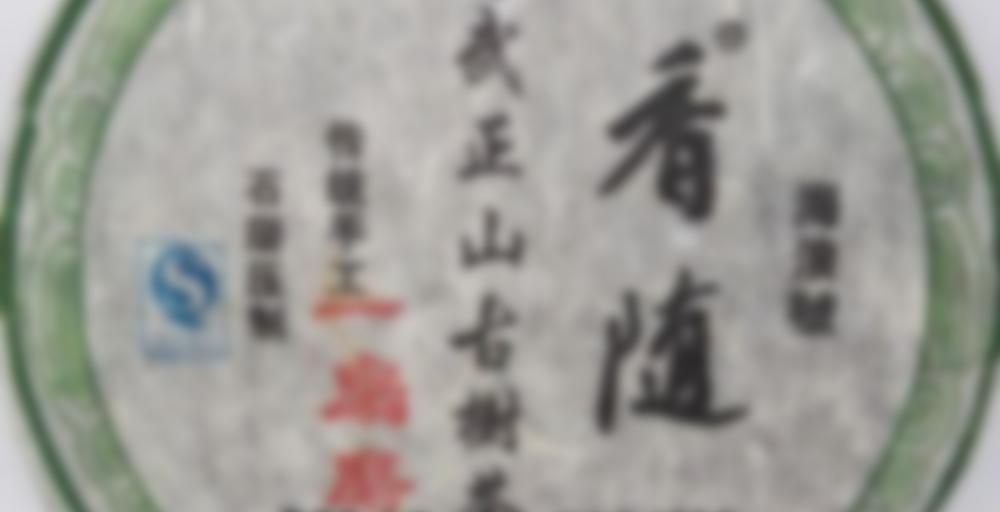 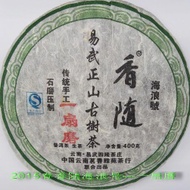 One of the most premium Ancient Arbor tea cakes that Hai Lang will produce this year. The 2010/11 Yi Shan Mo cakes are highly sought after by collectors and command high prices!!!

Hai Lang’s Commentary: Yi Shan Mo: This tea is composed of extremely large and plump strips with clearly distinguished leaves and buds and highly visible white fuzz. When brewed, it has a strong and fresh nectar-like fragrance. It enters the mouth with a thick sweetness, and the tea liquor is rich and strong. It feels as if the entire mouth is filled with tea. Overall this is extremely similar to the Tea King cake, but it also adds a certain unique “mountain top charm” that belongs only to Yi Shan Mo. Huigan (“returning sweetness”) and salivation are both extremely strong and long-lasting. The flavor lingers for an exceptionally long time. The tea also exhibits profound houyun (“throat charm”). The overall strength and intensity of this tea is slightly higher than that of the Tea King cake, and it possesses a very high level of qi. The experience of this tea is not as intensely stimulating. This realization only arrives after letting out a belch of satisfaction upon finishing the tea. The leaves are plump and thick, blackish green and highly uniform. Overall, this is a very well-produced tea with no obvious flaws.

Stone Pressed with 40 kilogram molds in the traditional manner. Compression is perfect!

I loved the Hai Lang Hao Yi Shan Mo ripe pu’er enough to purchase a whole brick of it, so I was very curious to try out what a traditional raw pu’er offering from this village would be like. The ten gram sample I received was all broken up leaves with even some twigs mixed in. After my last ten gram sample from Yunnan Sourcing turned out to be closer to twelve grams, I probably really should have weighed this one, but let’s pretend it was ten grams. I dumped it all in my preheated 140ml gaiwan and what I could smell was almost like mocha. Really interesting. I gave the leaves a brief five second rinse and sipped what little the leaves hadn’t absorbed while I let the moisture soak in even deeper for five minutes or so. What I tasted was cream and plum. Fairly strong too. Plum is a new one for me.

I did eleven steeps. The timing for these was interesting: 5s, 5s, 5s, 5s, 5s, 5s, 5s, 7s, 10s, 15s and 20s. Yes, flash steeps until steep seven! Pretty much what you’d expect from a dancong brewed Chaozhou style. The first infusion tasted pretty much identical to the wash, expect slightly more diluted because of the larger volume of water. The body was fairly medium. The cha qi on the other hand was HEAVY. I felt the tea so strongly in my body, it forced me to slow down.

The second and third steep brewed up REALLY, REALLY strong, but the flavors themselves were less discernible now. There were some echoes of the earlier taste along with some greenness. I found the tea really overpowering, both in strength and its effects. Steep four produced a slightly bigger, creamier body. The taste was still somewhat plummy while I also got some astringency and sweetness.

The increase in body was lost in the fifth infusion while the profile started to become cleaner. The strength and effects of the tea were still as strong as ever. The next two steeps introduced an increasing amount of bitterness and steep seven was also when the strength finally started to drop for the first time.

Starting with the eighth infusion the flavors also began simplifying. Some of the tea’s underlying basic taste could still be found in the background while there was some bitterness and astringency present as well. The tea was still going strong in the ninth steep, but it was less intense now and easier to drink as a result. The taste was fruity, not just plummy like before. The fruits were still present in the next steep, but now in a drier form and together with the lack of sweetness the two were making the tea less enjoyable. The last steep still had strength, but the flavors were starting to taper off, so I thought this a good place to end the session. The increasing dryness also wasn’t doing the tea any favors.

This was the most intense tea I’ve ever drunk. I am a fan of strong tea (loved Hai Lang’s Lao Man’e sheng), but even for me this tea was simply too overpowering. If there’s ever been a tea I felt needed time to mellow out, it’s this one. This tea did not get me tea drunk, the effects were from the neck down, but the burden it placed on the body was immense. I started the session around noon and finished a couple hours later. Even when going to bed that night, I could still feel the effects of the tea. Underestimate Yi Shan Mo at your own peril.

Clearly this is top-notch material, but as stated, for me the tea is simply too intense. While the plum notes are interesting, another thing I would hold against the tea is that it doesn’t really vary very much in terms of flavor. Perhaps it’s due to the stage it’s right now in its development, but the base taste of cream and plums is present in some form through most of the steeps, making the tea feel a bit monotonous. Obviously a great candidate for aging, but fortunately another expensive tea I don’t feel compelled to invest in.