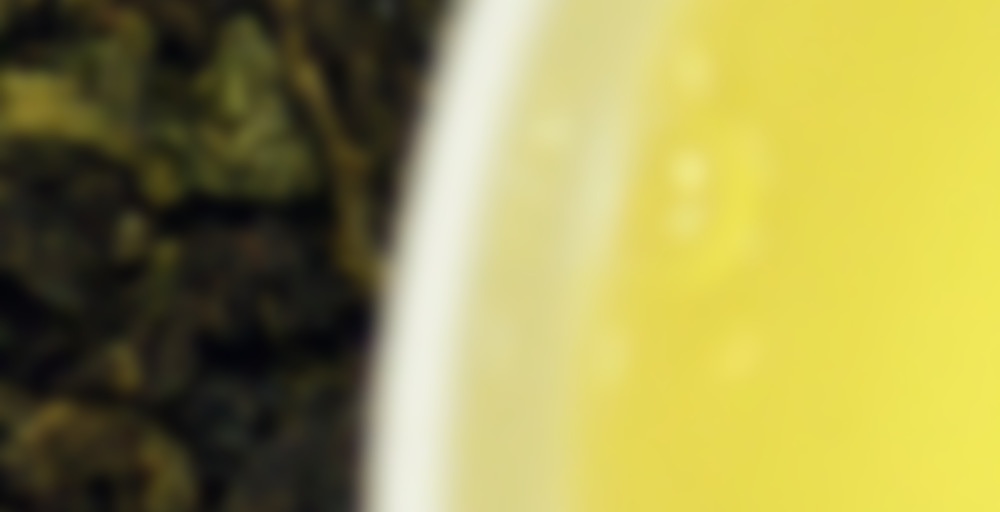 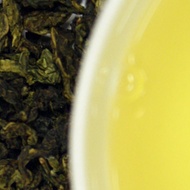 This delicious tea is a great value. We search through all of Anxi to find a tea that captures the high floral notes and has nice body, but not too expensive. Its tiny greenish balls can be brewed several times. Ti Quan Yins are some of China’s most famous teas. They are from Southern Fujian Province, and it was in these hills that teas were first rolled into small balls. That allowed the teas to slowly oxidize and slowly develop these great flavors. Each tea leaf goes through complex changes as it gradually dies. Ti Quan Yin is medium bodied and may be brewed several times. Enduring flavors of honey, butter, and almonds.

This is part of the free sample from Russel at Harney and Sons. I made this for tea party today.

This was the third and final tea we served. It amazes me to see how light the liquor for this tea is, because the flavor and body are certainly not light! I really enjoyed this. In fact, I have found myself lately craving Ti Kuan Yins and drinking copious amounts of them.

This one is very good, and I meant to order it last time I placed an order but forgot. Good news!
Harney and Sons is offering free shipping, I think through Saturday, on orders over $25 with coupon code Ambessa. The first email said the shipping was free if there was at least one tin of Ambessa purchased. Two more have come in saying that you don’t have to buy Ambessa to use the code and get free shipping. If they had Lingonberry already in, I would be all over that! I am out of Cherry Blossom Green, too, so another Harney order is already starting to fill the notepad.

This is my last Harney and Sons sample that Russel, from Harney and Sons, had sent me. I must say that this is my favorite! This is my first experience with drinking Oolong, but I doubt that it will be my last.
I brewed the Ti Quan Yin to 195 degrees fahrenheit. These tea leaves were neatly rolled up into tiny balls. I was amazed at how much they expanded after the leaves were steeped.
I steeped it for approximately four minutes. The aroma has a lovely floral scent. The liquor was a light yellow/gold to a medium gold. The taste was a fresh taste that reminds me of green tea with a floral taste that isn’t overpowering. I also tasted a slight vegetal flavor but there is a sweetness that balances it out. This was a smooth cup that I really enjoyed. I would recommend it.

I would like to thank Russel from Harney and Sons for sending me this sample. I really appreciate it!

Oh pants! (Thank you, Jim Marks, for the new expression! You gets is enjoying it very much.) I already placed my order and I wanted this one. Well, guess I will have to place another order! :D

I can totally relate. I’ve went to buy more tea after reading some tealogs recently. My tea stash is definitely growing. :)

I enjoyed 3 steeps of this yesterday. It’s a little floral, but not as strongly floral as I was expecting, given the name. I got mostly a fresh, crisp, veggie taste for all three steeps. Much different than the buttery, creamy oolongs I’ve had. It brewed into a really pretty yellow color. Not bad, but probably not one I’d seek out. I think I prefer my oolongs to be buttery! ;)

This is a lovely green oolong. I like my teas nice and light with a floral taste to them and this is one. The little green balls expand so much into large whole leaves, I’m always amazed by this and enjoy watching it. Dry, it has a lovely floral smell without it being overpowering like a jasmine tea can be. Wet, it retains that floral scent to it but there is a slight vegetal-butteriness to it. The taste is nice and light and fresh and again very floral. In the aftertaste I get a bit of the vegetal-butteriness. After the third steep the mouth-feel became a little too much for me, almost cloying, and I decided to take a break from it. The butteriness stayed in the back of my throat after the third steep for a decent amount of time, I’d say a solid half hour. This is a nice light, floral tea that can be re-steeped many times that I really enjoy. It is beautiful to watch steep, it is beautiful to smell (both dry and wet), and it is lovely to taste. Truly a wonderful tea.

After trying and reviewing H&S’s Top Ti Kuan Yin, I decided to try their other TKY offering. I wasn’t expecting much but honestly I was surprised.

I opened the tin and took out a few leaves for inspection. The dry leaf is made up of tiny tightly curled up balls with a rich bright green color, very pleasing to the eye. They are very aromatic with even a single leaf giving out a gentle floral fragrance.

Surprisingly this tea did come with instructions on the side of the tin, but it asked for boiling water. I usually don’t prepare TKY’s using water that hot, so I double checked the brewing instructions in their website, and surprise, they were a lot more detailed. So I prepared this tea following those instructions using 205F water, 4-5 min steep time and a gaiwan. As with my other TKY’s I re-brewed this 7 times.

The resulting brew gave me a clear bright green cup with a very nice floral aroma. The taste was a combination of subtle fruity and floral flavors with a refreshing floral aftertaste. The second cup remained mostly the same in terms of fragrance, but the taste became much more floral with a more pronounced “fresh” aftertaste, almost minty. In the third cup, it became less aromatic but retained most of its flavor and aftertaste qualities. Fourth cup, aroma is now very faint, taste remains consistent but the aftertaste is now gone. In the fifth cup, the tea began tasting slightly “green” with a slightly smooth texture. The sixth cup retained that hint of smoothness and was still slightly floral. The seventh cup was just a hint of the floral flavor with the green taste but still, I found it quite enjoyable.

The wet leaf was very well preserved, mostly small to medium sized leaves, few broken pieces, and no stems in about a teaspoon of tea that I used.

Overall, I enjoyed this tea a lot, it is everything Harney & Son’s describes it to be. It surprised me that it was able to make it up to the 7th cup and still deliver some flavor. This tea is perhaps the best TKY I’ve had in this price range. It is floral, has a great taste, very fragrant, and while not as complex as other high end Ti Kuan Yins, it at least adds a level of complexity to your drink that others simply do not have. At about $4 an ounce, this has to be the perfect everyday TKY.

Wow. This is on the light side of the oolong spectrum. In fact, I bet I would call it a green tea if I tasted it blind. I think this one of least oxidized oolongs I have tried. It has a definite vegetal taste, but it is slightly sweet. It is very smooth to drink, almost creamy. I think I would use this tea as an alternative to green tea, rather than a tea to fulfill a craving for oolong.

I agree with everything you’ve written here. Between the flavor and the compressed leaf balls, I was halfway to thinking that I’d been given a mislabeled gunpowder green tin!

There was so little of this left, it screamed for a sipdown. It is what I’d added to the Upton the other day so I would have enough to steep that in the Breville without having to go all fractional. I made it western style having done my duty by it through multiple steeps in the original tasting.

Green oolongs are so wonderfully springlike, it is hard to think about the fact that it is basically the dead of winter. Not that we have winter here, really.

This one was lovely and floral, with just enough butteriness.

So…not this one isn’t as floral as you might think consider it has “floral” in the title. It’s more greeny/grassy than anything. You can definitely taste the floral, but it’s a very light note in this tea. It’s a decent oolong, but not something I’d drink again probably. I prefer stronger floral teas. But if you like a grassy oolong with a touch of floral, this is the tea for you!

Another one I’ve been saving. It smells amazing. Lovely vegetal\floral aroma to it. The flavor is floral, vegetal, crisp, and very refreshing. It’s smooth and had a creamy texture to it. It has a nice sweet note in the aftertaste. Like… buttered peas or something like that. Very nice oolong :3