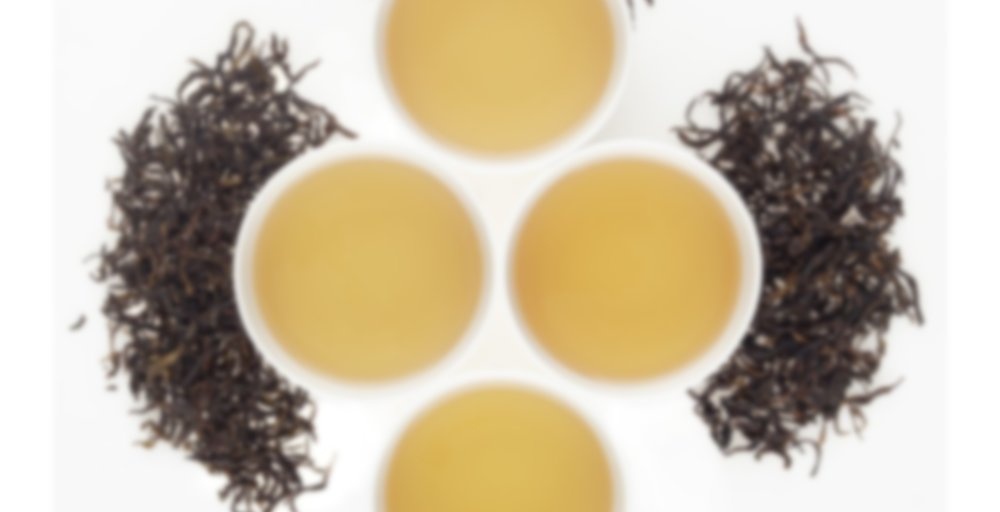 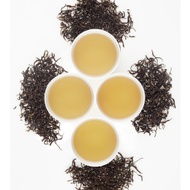 We have been buying teas from the Fenghuang Mountain area of northern Guangdong Province for over 22 years. We mostly buy the teas from Milan tea trees, we just love the intense peachy flavors. A supplier suggested that we get a special offering. It is the tea from four different ancient Song Zhong tea trees. Song Zhong varietal is an old one up in Fenghuang. Also, the tea master roasted each tree’s small production to accentuate the unique flavors. Each tree is labeled by a number. No. 1 is floral, No. 2 is fruity, No. 3 has body and No. 4 has creamy notes. These teas should be rinsed with hot water before the first steep. They can be re-steeped several times. Each time should be at least 15 seconds more the previous steep. Our supplier also said that you can do a cold brew with this tea. Truly a marriage of one plant & one person. It only needs one more person: a tea explorer.

I’ve been pretty jealous of all the people who have access to high end Dan Congs, and I’ve been longing for some good stuff myself. Finding good quality tea that’s affordable for this type has been a pain in the tuckus though. I’ve been tempted to get the stuff priced at a dollar per gram, but I want to be able to try MORE teas, so I need to have a better strategy.

Since I have not had Harney in a while, I checked out their Dan Cong offerings for the year and they had more than usual for 2018. I saw this one and hesitated to buy it since it was $48 for about half an ounce each of this tea, although Song Zhong’s tend to be a little pricier anyway. Then the new years sale was promoted, and I snagged some.

These are four Song Zhongs from four different teas. They all have a very similar aroma, and they all almost look like the same tea. The variety comes in how strong they were in aroma and flavor, and the ratio of the notes because they were all creamy, floral, and fruity. All of them were on the greener end of medium on the oolong spectrum.

I drank them in order, sometimes gong fu, some times western in a tumbler.

No.1-Described as the most floral of the bunch. It was, giving me a milky iris note in the taste. It tastes very close to the Zhi Lan I have, and it can occasionally have an apricot note, but it is very buttery and creamy. I might even use butterscotch for a note on this one, although it’s still very floral and just the hint peachy. It does last pretty long, and it is fairly enjoyable. It’s not too finicky and can endure some longer steeps over 30 seconds, but it can get a little astringent if I’m not careful. It does remind me of some Japanese milk candies. Rating it between 87-90.

No. 2 is Fruity, and it’s my personal favorite. Of course there is orchid and peach, but the dry leaf is so fragrant that it reminds me of candy. Lychee immediately came to mind when drinking it, then mango, and it only became citrusy in the later steeps. It is a little milky like number one, but not too much so. It’s like drinking lychee candy. Rating it around 90-91.

No. 3-a pain in my behind, and it has been finicky for me. Harney describes this one as having the most body. I’ve yet to find that personally, and only Gong Fu works for this tea in very short steeps of either 15 second increments or the 3-3-5-7 I just started using. Even when I did the 30 second method, the tea was speaking to me “I’ll only give you a sneak peak…and then nothing else. Maybe I can show you my floral ankle for a little bit?” And then it was just muddled. This tea does have the body and general profile that the others do, but it is more subtle. I was only able to coax it later on, and some peach notes come through. This one might grow on me, but it is my least favorite so far. Rating 85-88.

No. 4-They describe it as creamy, which seems repetitive because that describes all of the teas. It’s got the apricot, peach, orchid, and iris florals like the others, but it is thicker in its body and texture. It’s fruitier than number 1 sometimes having something that reminds me of strawberry (something I would not normally write about a dancong), but not as fruity as number two. Aroma is fainter than 1-2 as well, but it still has some. Creamy is a good descriptor, but I’ll have to experiment more with it because it does have some complexity. 89-92.

I’m glad I got this sampler because you don’t see very many U.S. vendors selling this variety. The price is okay, but it’s solid overall since other companies will charge you through the nose for a Song Zhong. I think this is best suited to intermediate tea drinkers, because I could see some experienced drinkers snubbing it for not having enough complexity or lacking an angle like roast, or they might appreciate it for it what it is. I’m pretty happy with the sampler overall, and I’ll probably write more about these bad boys in the future.

Dude, I feel ya on right now. Getting ready to go back to school, paying for vehicle repairs, and rebuilding my savings has left me with an unbelievably tight budget. I had to pass on some of the new Dan Congs and Yunnan black teas Yunnan Sourcing brought in because I couldn’t justify the expense. I’m also fighting off the urge to go on a What-Cha buying frenzy since Alistair just brought in some experimental Jun Chiyabari oolong and black teas that look incredible but are very expensive.

Yeah, I just went on that frenzy myself. I got all of the oolongs, but did not get the black one of the limited edition. I can save some for a trade if you have any teas that you think I might like. I also have the Iris Orchid from Golden Tea leaf in bulk, which is a great tea.

I’ve been targeting specific teas at specific pay checks. I need to otherwise hold off though because of my high medical bills. My family has been in a tight spot, so I’ve been helping them out a little bit.

Oh, speaking of the Iris Orchid, I did a little research on that one. You were right about it. It is indeed a Zhi Lan Xiang. Apparently, Zhi Lan translates as Iris Orchid and refers to a specific type of orchid grown in parts of a China. Unfortunately, Zhi Lan Xiang, however, is both a Dan Cong oolong cultivar or subcultivar and/or any Dan Cong whose roast is intended to bring out an Iris Orchid scent. I’m pretty sure Golden Tea Leaf’s Iris Orchid comes from the actual Zhi Lan Xiang cultivar, but I could be wrong. Everyone seems to like that tea, btw. Prior to typing this reply, I also went on a What-Cha splurge. I picked up everything except the Royale Ruby black, the hand-rolled oolong, and the Shiiba oolong. I may be able to swing one or two of the others with the next paycheck, though, so if you want, I’ll definitely pick up the black and then we can split it.

That sounds rather nice, actually.

I can also save some Nectar and Cocoa Amore from Whispering Pines if you need me to.

I’d be interested in a small amount of either, though there is no rush on that. I took the plunge and actually ended up getting at least 25g of everything new What-Cha has right now. God knows what Alistair will end up including as samples. I’ve noticed that he will often include samples of more expensive teas or teas that he happens to be sampling himself when I order, so I could end up with anything since he is always trying new stuff himself. I know there is a Darjeeling blend that he has been toying around with for a bit, so here’s hoping I get some of it. I think I’ve got some Foxtrot and Art of Darkness around here somewhere if you haven’t already tried them. I also unfortunately finished the Ambrosia. I forgot I was supposed to be holding some of it for distribution. Sorry about that. I will say that it was great, a few steps above Golden Orchid in fact, but I found the Golden Orchid to be more accessible and versatile. I honestly did not think Ambrosia was so much better than the Golden Orchid that it was worth buying over it. Another thing I have that might be of interest is a purple yabao that I have been aging for just shy of two years. I somehow ended up with 100 grams of it even though I only paid for 50. If you wanted, I would be willing to split up just about anything in my cupboard. On that note, I have more tea than my cupboard shows; I have a lot of things I never got around to listing, so if you are looking for something odd, there is a decent chance that I have it or know where to get it.

A few other unique teas I have which may or may not be listed in my cupboard are as follows: Zhengyan Shui Xian Huang Pian and Rou Gui Stems from Old Ways Tea as well as an Orchid Scent Shui Xian (pretty sure it’s from the Banyan area) from Wuyi Origin. The last of these three I don’t think has been available since either 2016 or 2017. I recall buying it right before it went out of stock.

Okay. I’ll let you know. I’m in no rush either. I’m mostly on a Dancong Hunt anyway. I’ve had Art of Darkness before, and I was happy with it, but I had a hard time getting the right balance of spices as I did when I first tried it. I have not had Foxtrot yet. I can’t remember if I’ve had Ambrosia. I’ve had Cocoa Amore once before as an old sample and had a hard time with the vanilla balance, although the base had some of my former black favorites like the Ailoashan. I actually liked the North Winds more than the Golden Orchid itself. Ancient Spirit kicked both of their buts, of course.

I’ve got more in my cupboard than advertised, too. Most of it’s Gaoshan.