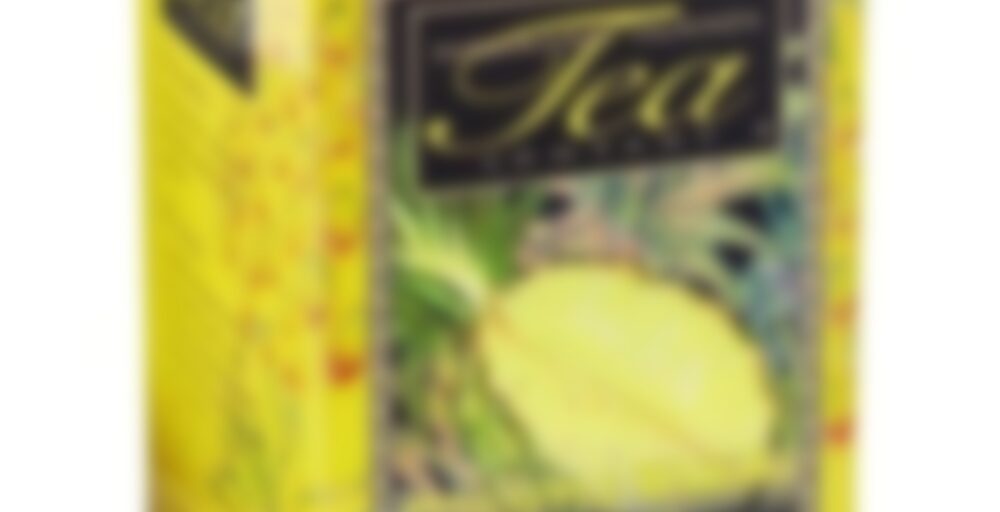 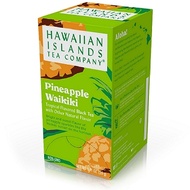 by Hawaiian Islands Tea Company
67
You

Celebrating the king of fruit, we’ve added the heady aroma and sweet flavor of pineapple to our special black tea blend for a vibrancy as festive and refreshing as a stroll on the moonlit sands of Waikiki Beach. Made with classic Camellia Sinensis tea leaves and natural flavoring. Rich in polyphenols (antioxidant), our Pineapple Waikiki Tea has lasting flavor, even after prolonged storage.

DISCLAIMER: This is very old tea. Please don’t judge this tea or company by this review. (No rating for this reason.)

Due to lack of a tea ball, I figured ‘why not try to use up some of these ancient teas’? So, round 2 of ancient tea. Round 3 coming shortly (well, you see, I also took home one of my mugs, so only have one…. what’s this one-tea-at-a-time thing?!)

This might be the least appetizing of the bunch. The teabag smells like… oldness. Haha. There are also more of this type than either of the others, because I guess I was more enamoured by passion fruit and mango (not too surprising).

The smell of the steeped tea has a bit of light fruitiness. I wouldn’t identify it as pineapple, but it’s definitely different than the mango tea. I’m also smelling some black tea maltiness. I think I do like the black tea base that was used for these blends.

Oh wow! There’s actually some pineapple flavour! At least initially. I was not expecting that. Like, we’re actually talking a flavour that I identify not as mere fruitiness, but pineapple. It is very subtle though, and mostly in the beginning of the sip, before the black tea moreso takes over. Given it’s age, I’m pretty impressed though. Another tea that I’d like to try a fresher version of. I think I might like it :) One more to go…

ETA: Blagh! I let this cool down, had a yogurt, and then finished it, and somehow it tasted like it had developed a fair bit more astringency. Ick. Oh well, it was nice when it was warm!

My sister got this for me years ago (when she lived in Hawaii). It came in a pack with two other tropical teas, and I keep forgetting to drink them. The reason for that would be that they’re pretty forgettable. Unfortunately, this “pineapple” blend isn’t fruity at all. At most, I get a slightly woody note out of this tea, and otherwise it’s just a slightly funky-tasting black tea. I’m sure it doesn’t help that I’ve had it for so long, but I remember being terribly disappointed after first trying it as well.

Licorice is the first thing that came to mind as the hot water hit the tea bag. I almost dumped it but thought it can’t really taste like licorice. Well, I was right but I’m not sure what this tastes like. It certainly isn’t pineapple. I think it’s trying to be fruity but it fails. It does smell a tiny bit like pineapple after I removed the tea bag but that does not carry over into the taste. Adding some Sugar in the Raw to see if that helps it any. Nope. Somehow that removes what little flavor it had.

Not the best, but not the worst. A coworker of mine gave this to me from when she lived in Hawaii.

It’s bland. Pineapple … not really. It’s not even listed in the ingredients so I’m not quite sure of why are tasting pineapple but I don’t.

smells like…. something familiar..not quite pineapple but sort of if you really think hard about it.

tastes like… burnt fake pineapple. if that makes sense. there’s another flavour here i can’t place that is fruity…somewhere in between pineapple and peach…but there’s a burnt taste here. Funnily enough, i don’t hate this nearly as much as others have… it’s in pineapple/ not really..but it’s not bad haha

I like this one. Its just a simple tea. A good one for on the go!

From Another TTB Round 2

The box arrived! EEEiiii! This is my first TTB so I’m excited. The box actually isn’t as overwhelming as I though it would be so YAY!

I grabbed this one first out of the box because I’ve been wanting to try some Hawaiian teas but hadn’t the chance yet. Plus it’s one of the few tea bags in here and I wanted something easy.

They aren’t kidding when they say Pineapple! Even dry the tea bag was delightfully pineapple-y. I love pineapple, I could eat it all day if only my tongue didn’t go numb.

The black tea base is OK, it’s not overwhelming, but I wouldn’t call it amazing either. Overall it’s not offensive, but I think I would have found a green tea base more interesting. The smell of the brewed liquor is not as sweet of a pineapple as when it’s dry. The dry smell was more like crytallized pineapple versus the brewed smell which is more like pineapple juice. Mostly this tea is awesome because of the smell, but that is pretty fleeting as the tea cools.

Surprisingly enough I’m getting that ‘back of the tongue, numb feeling’ I get from eating fresh pineapple. Haha, talk about getting the entire experience!
Would I buy? Maybe. I’m sad that this is the only teabag of this tea in the box, so those behind me won’t get to try it, but I might have taken it all for myself anyway, so there’s that.

This is one of those bagged teas, if you are used to great loose black teas, tastes kinda meh. However, after a couple runs and fussing with temperature and times, I found at the 200F and 3 minute mark gets a decent cup. About 10oz for a bag. I oversteeped the first couple and the blend is kinda bitter and weird tasting with not much pineapple.

The black base is a little uninspiring, but the pineapple is quite nice. It’s very pineapple tasting with a bit of a candied brown sugar taste. Actually, it’s not bad.

Ugg, I miss Hawaii. Wish I could move there!

Hmm, not really getting a lot of pineapple here. Lots of the black tea, and behind that a bit of something fruity and woody. Kind of thin, but not unpleasant. My parents brought this back from Hawaii for me and on the box it suggests using a sweetener to enhance the fruit flavour. Trying that next time!
Edit: Lighter on the second steep— less of the black tea and wood, more of the fruit.

I’ll probably have to write another review when I’ve gotten over this cold, and fully regained all my senses, but this tea is absolutely lovely. A wonderful departure from plain black teas, and a welcome diversion from said cold. I had 2 cups this evening, and it was wonderful – the fruit flavor wasn’t synthetic (as I’d feared it may be), and it was just enough to add interest without being overpowering.