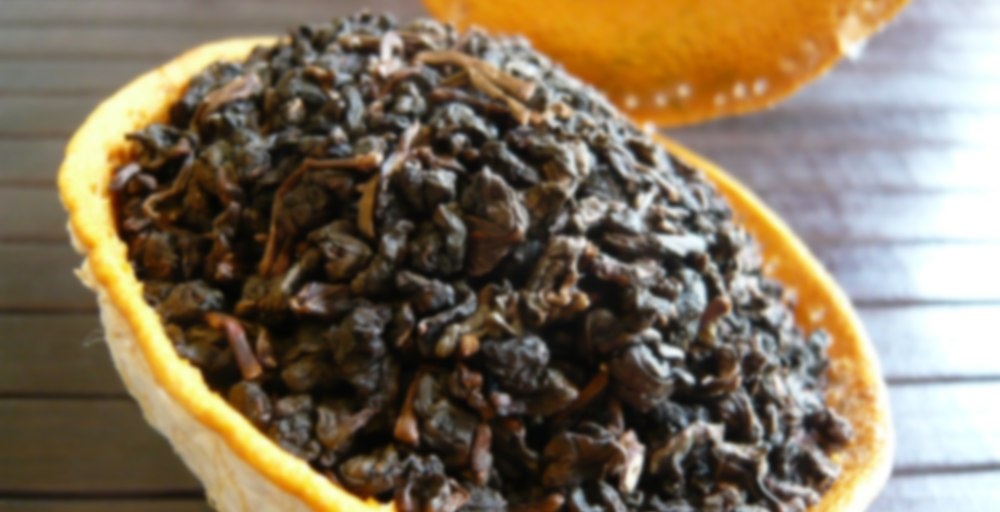 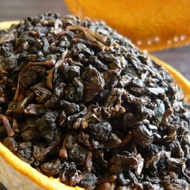 Tea Grapefruit made with Taiwan Wuyi

Homemade!
The Taiwan Wuyi used is this one:
http://steepster.com/teas/life-in-teacup/10656-taiwan-wuyi-oolong-year-2006

Haha! It’s not purchased. I made it! More photos are here:
http://gingkobay.blogspot.com/2010/04/first-tasting-of-my-home-made-tea.html

So, I made some tea grapefruits in the past December and January. Here is a post about them!
http://gingkobay.blogspot.com/2009/12/made-my-own-tea-grapefuit.html

I am a super clumsy person, so I was really excited that I can MAKE something.

Although these are supposed to be aged for years, I thought I should open some and monitor the change of tea from time to time. So here is the first tasting that I did yesterday.

Before I receive my hand-made organic cotton paper from Yunnan, I would use regular napkin tissue paper to wrap them.

This is one of the first ones I made last December, when I was still struggling with sewing. I picked a relatively ugly one to open first. Most of those made later were slightly prettier. The label means 2009, December 2. So far I tried 3 types of tea. “B” is what I used the most. It’s a 2006 Taiwan Wuyi. It’s a relatively inexpensive tea, and currently I can get as much as I want. Besides, I’ve found it to be very mellow and its flavor mixes well with herbal drinks. So I thought probably it would be suitable for tea grapefruits.

raditionally the tea citrus is made with puerh (in Guangdong and Yunnan) or oolong (especially Fo Shou Oolong in Fujian and Southeastern Asia). But so far I don’t like shu puerh as much as most other teas, and I feel good sheng puerh could be a bit expensive to fill grapefruits – even for cheap Xia Guan tuo, you know, its future is EXPENSIVE!) So my current choice is this Taiwan Wuyi. I would like to try more teas when I feel more sure with this.

It smells good! Chinese like aging orange and tangerine peels. The aged peels are used in cooking and as herbal medicine. From outside, the tea grapefruit smells pretty much like aged peels.

When put side by side, the tea from the grapefruit (on the left) looks the same as regular Taiwan Wuyi. But it smells of slight aged peel aroma.

Same amount of tea in two same gaiwan (but I forgot to take photos of the gainwans). I guess this is 3-4 grams of tea in a 100ml gaiwan. After an instant warm-up rinse with boiling water, I made the first infusion as what I usually do with most oolong, Interestingly, the tea from grapefruit (on the left) yield slightly darker liquor. The two teas are same tea of the same age. But possibly the one was oxidized more with the moisture (and maybe biochemical contents as well?) in the grapefruit. The tastes of the two cups were very different. The tea from grapefruit tasted a lot brighter and complex, while the regular Taiwan Wuyi tasted darker and mellower.

Throughout the entire time, the smells of wet tea and gaiwan lids were very different. The regular tea smelt more regular, but the grapefruit aged tea smelt of some light citrus notes.

For the second infusion, I let both teas infused for 1 minute, so that any differences would be more enlarged. This time, the grapefruit peel flavor in the tea on the left is more prominent. At one moment, I thought the bright fruity flavor was really nice. But at another moment, I thought the grapefruit peel flavor was still too “raw”, with some astringency in it.

When making aged peels, the citrus peels used should be aged for at least three years to let all “raw” taste in the peel convert to a woody, deep aroma. In modern Chinese food industry, when they make “aged peel” snacks, although there is no 3-year aging, they would boil the peels and infuse them with syrup or honey to remove the rawness. If you bite on an orange peel, you will know what I mean. Raw orange peel, although tastes fresh, bears some astringency and spiciness that are not so pleasant. When the tea was aged in the grapefruit, it didn’t get too much of the astringency, but still, I think more time is needed to let the peel’s flavor convert to be more “ripe”. Overall, I am glad that the flavor seems all “logic” to me and it’s developing in the right direction!

For the third infusion, I let both teas infused for 3 minutes. This time, both teas tasted even stronger. Still, the regular Taiwan Wuyi tasted very mellow, with sugary mouth feeling typical of Taiwan roasted oolong. The grapefruit aged tea seemed to be sending a lot of different flavor signals to the tongue. I had difficulty to describe what flavors it exactly had. For some reason, the complicated flavor made me believe this tea is very healthy (I don’t know why, but probably to me, slight bitterness, astringency and overall orange peel flavor all indicate healthiness). By this time, my husband (who is generally not a tea drinker) came over and I let him taste the two teas. His response was, the grapefruit aged tea was a little astringent but tasted more interesting, with some floral notes (however I don’t think his floral notes are the typical Taiwan high mountain oolong’s floral notes).

Overall, a problem I’ve found about tasting two teas side by side is, I can’t be sure how much time to leave between sips from the two different cups. On one hand, I thought they should be tasted one immediately next to the other, and that’s all the purpose of tasting two teas side by side. On the other hand, many teas have great aftertaste and mouth feeling, which sometimes last many minutes (even hours when it comes to some sheng puerh) after each sip. This Taiwan Wuyi doesn’t have as complicated layers of flavors as some other oolongs, but it has great aftertaste. It usually leaves the mouth and tongue feel sweet and cool. Now when I tasted the two Taiwan Wuyi together, there was no way for me to determine what kind of lingering aroma was from which tea.

The opened grapefruit was tied up, and the tea will be tasted again after the summer. I can’t decide yet wether to send some to my mother now or laster when it’s more aged. But I somewhat feel she will like this tea!

Oh my! Sorry for making this tasting note so lengthy!

Wow! That’s pretty cool. I look forward to hearing more about the grapefruit tea as it develops!

This was a really good note! I love the whole concept of ageing tea in citrus fruits. It looks so cool.

Very clever! I enjoyed reading about your homemade/handmade efforts!

Okay, that’s really neat! I kind of want to make one now.

Thanks guys! I will taste it again after several months and will report again!