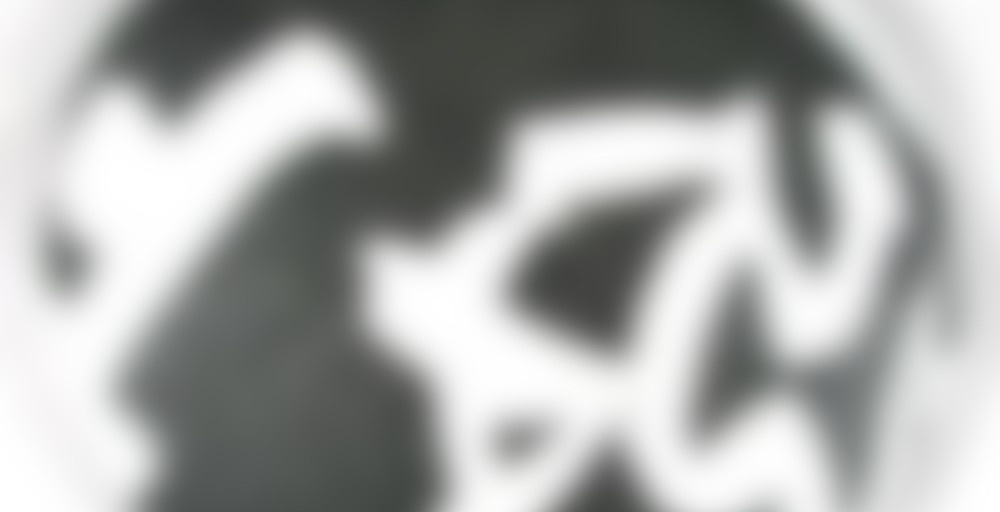 Description: “Tai Chi” series is the most exciting introduction by Xi-Zhi Hao in 2006. Both cakes, “Yin” and “Yan”, were made of pure spring-harvested sun-dried mao cha collected from the wild forest in Lao Ban Zhan. The whole production, from harvesting to final wrapping, was attended and overseen by the owner of Xi-Zhi Hao himself in Yunnan.

This is the “Yan” cake of the Tai Chi series. The wrapper is a white “Tai Chi”, written by the famous Calligrapher “Ke San” of Taiwan, on a black background. So artistic I actually frame one pair of the Tai Chi wrapper and hang on the wall, and use another clean paper to wrap the cake : )

What a sensational pu-erh! The link below show a macro picture of the unfurled leaves:

Click here to see a macro of the leaves

The massive “wild” feeling from the leaves is truly an visual excitement. But quite contrary to the wildness in their appearance, the liquor is elegantly honey-yellow with an impeccable clarity. While the aroma from the dry leaves has a hearty fresh mushroom-like fragrance, the aroma from the liquor is saturated with refreshing veggie/floral scent in an aromatic woody background. No smokiness. A whiff of dynamic “sunbathing” smell. The structure is solid but ripe and civilized. The feeling from the taste coats the tongue/throat well, with little harshness or tingling. Enjoyable acidity, very deep-acting and lasting aftertaste with interesting bitter-to-sweet transformation. If I have to summarize my impression,“surprisingly smoothness in taste from leaves of massive wildness appearance”!

The traditional mao cha processing in Lao Ban Zhan region has an additional unique “stripe-kneading” step: in addition to the hand kneading of the leaves before, during and after sun-drying, farmers in Lao Ban Zhan roll the semi-sun-dried leaves into a stripe form. The reason is that the leaves (bud-and-two-leaves) harvested from this region are extra long (the distance between tender leaves could be as long as 2in). By making them into the stripe form, they are easier to be pressed later into cakes and reduce the breaking of leaves. Of coz, now not all stripe-form leaves are from Lao Ban Zhan.

The following are my tasting notes. They cover my first two sessions with this tea. I present them here, with minimal editing.

Leaves are lightly compressed. They look a bit smaller than the White Wrapper version. Smell of dry leaf is a cool earthiness. Definitely more broken leaf in this sample. Steamed aroma is almost nonexistent. Brewed aroma is a strong petrol. Beneath that, is some honey sweetness. That sweetness really sticks to your senses. Tea soup seems to be slightly more golden in color than the White Wrapper.

First sip is oily. Both in texture, and in flavor. Sunflower oil, to be exact. There’s also a lot of that honey sweetness. Not much else jumps out so far. The finish is long. Amazingly, the sweetness seems to get stronger as the finish progresses. Already, I feel a bit of a buzz.

Second steeping is a lot stronger. There’s a bit of that petrol taste right off the bat. That goes into intense honey sweetness. Finish doesn’t evolve too much. A vegetal note enters in, but it’s second fiddle to the honey sweetness. Texture is still oily. Throat feeling is a bit harsh. The kind of harsh you get right after you’ve recovered from a head cold. Like swallowing is a bit painful, and lumpy. The back of the mouth/top of the throat areas is cool.

Four steepings in. Surprisingly, the cha qi isn’t overwhelming me like it did with the White Wrapper. In fact, I barely notice it. There’s some minor heaviness in the fingers, and some even more minor mellowing of the mind. Flavor hasn’t changed. Finish hasn’t changed. Throat feeling hasn’t changed.

I think the White Wrapper is better.

Using my jianshui pot this time. Very little aroma in the steamed leaf. Ditto for first brewed leaf. Taste is very different than the previous session. Flavor is very weak. What little I can detect is a hint of pu’er dirt, and a bit of corn sweetness. Viscosity is fairly thin, and watery. Already, the throaty aspect of this tea is coming into play. I feel the need to clear my throat.

Second brew is very similar. There’s now a bit of pleasant bitterness in the mix. Finish quickly moves into the sweet corn. Still very watery. I used 6.5g for a 100ml pot, so I’m not sure why that’d be the case. Throat feeling isn’t growing in intensity…yet.

After I finish the third steeping, cha qi starts to hit me. It’s still mellow, but I can tell that it’ll grow rapidly. It’s centered in around the forehead – right between the eyes.

Third brew is aromaless, at least the texture is starting to thicken up. Flavor is a very forward hit of acidic dirt. The acidic dirt note is carried through on the finish. It’s joined by pleasant bitterness. Throat feeling is staying pretty stable. Definitely noticeable, but not irritating like it was in my previous session. Cha qi is also acting differently. It’s sort of lazily ebb-flowing around. One minute I feel fairly stoned, the next I barely feel it.

Fourth brew is showing a bit more flavour. Acidic dirt is still at the forefront, but it’s gotten a bit more complex. It’s got a bitter edge, with just a hint of minerality and sweetness. Finish is sort of a drying sensation in the mouth. Throat is feeling okay. Cha qi is hitting harder.

The tea gets stronger with every brew. Which, considering where it started, isn’t saying all that much. I think the Black Wrapper is a disappointment. What it does get right, read cha qi, is still not enough to make it worth the price of admission. Especially when compared to other teas in its price range.

I was fortunate enough to get a sample of this tea (along with its “white wrapper” counterpart) in a swap with a kind and generous new teafriend. From the minimal amount of research I have done, it seems this is a coveted cake which has received a lot of positive press in the online puerh community, and is thus now sold out of many sources and goes for pretty incredibly high prices otherwise. I brewed this tea up at 1g/15mL, as I normally do with sheng. The dry leaves had a nutty (walnut) note to the aroma, with some light sweetness. After a rinse, the aroma was sweeter, but notes of leather and wood also emerged.

The first steep had a slight leathery note and was a little bit sharp or rough in the front of the sip. The finish was woody sweet, with what I thought was a hint of dark fruitiness – this huigan was long-lasting. I took my time between sips, as the flavor lingered for minutes at a time in my mouth. I started to feel a little bit of rising energy in my chest as I let the huigan play out after this steep. The texture was already pleasantly thick.

Any sharpnesss was gone for me in the next steep. It was sweet and woody, though a touch drying. Huigan was woody sweet and again lingered long after swallowing. I started to really feel the qi at this point – my arms felt simultaneously heavy and light.

The next steep was instantly mouthwatering, very sweet, and I was sure this time that there was a bit of fruitiness to the aftertaste. Not the bright, apricot fruitiness more common in young sheng, but a dark and deep fruity note that danced over my tongue and in my mouth. This steep was incredibly warming and started to make my mouth feel tingly and numb. The qi also moved its way up to my forehead, where I felt it sitting there.

The fourth steep had more of a dry woodiness with a sweet woody, nutty, and fruity character to the still powerful and lingering huigan. It reminded me slightly of the oakiness you get on the finish of oak-aged spirits or wine.

By the fifth steep, I was starting to feel a bit slower and fuzzy, less coordinated. I had to focus to not spill my tea all over the place. The flavors were much the same as the last steep, and they continued this way through around the twelfth steep. The qi continued to build for this whole period. It was a little bit difficult to carry on the conversations I was having with teafriends on Slack, and when I got up to use the restroom at one point, I remember feeling rather light and almost floaty.

Around the thirteenth steep, the flavor started to taper off. I squeezed out another five or six steeps, which still had good woody sweetness to them. As the flavor waned, so did the qi – I felt mostly normal by the end of the session, so it didn’t mess me up past when I was finished or anything like that.

Final Thoughts
This was an excellent session, probably the most pleasant and strong feeling qi of any sheng I’ve tried to this point, and the flavor was excellent as well. That said, it isn’t good enough to warrant the price of a full cake – I don’t really think there is any tea I would consider paying $1000+ (or $600 or whatever) for. If I was in a much different financial situation, then I would absolutely consider going for a cake(s) of this! I would definitely recommend people who are into sheng attempt to track down at least a sample of this tea.

Going into the session knowing what I did about this tea makes me wonder how much my mental state affected the session. If I went into sessions with other teas knowing that others (whose opinions I value) consider the tea to be a “face-melter” or to be known for strong qi, would I have similar experiences with them? How much of my opinion is colored by preconceptions going into a session? To be honest, at this point in my tea-journey, I’m certain that my experience is colored very much by my preconceptions. It makes me think I shouldn’t read up on teas before I try them, but of course how would I narrow down my options if I didn’t? Sampling every tea sold myself is obviously not feasible. This paragraph is kind of rambling, but I guess it’s just something I wondered about after having such an enjoyable session with this tea. Then again, whether enjoyment comes from your own experiences alone or your preconceptions (or both of course), it’s still enjoyment, right?

I love this tea. It’s a fantastic bing. I’ve yet to try the yin.

I am a big fan of it as well and am looking forward to trying my little sample of the yin. :)