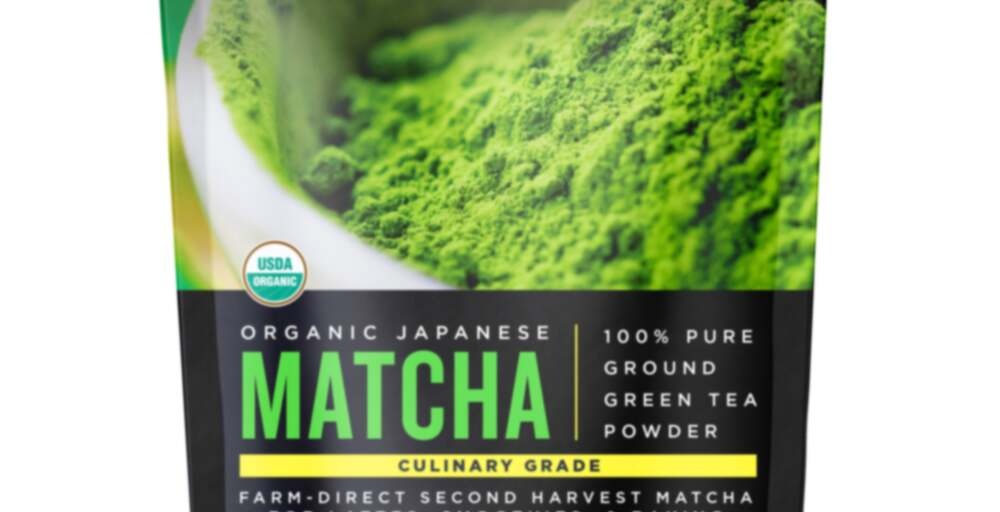 by Jade Leaf Matcha
--
You

100% USDA Organic Matcha Green Tea Powder, All Natural, Nothing Added (naturally gluten free and vegan)
Authentic Japanese Matcha – sourced directly from our partner farms in Uji and Kagoshima, Japan, allowing us to provide much better quality at better pricing than our competitors
Create Amazing Matcha Recipes – our culinary grade matcha is an affordable way to add a delicious, healthy boost to smoothies, lattes, baked goods, and other dishes
Love It or Your Money Back – if you are not 100% satisfied with your purchase of our Matcha for any reason, just email us and we’ll refund your order in full, no questions asked
Our signature line of matcha features a well-rounded taste profile from the fusion of the Uji (Kyoto) region’s characteristically rich, deep flavor and the Kagoshima region’s light, refreshing flavor.

This was a late night matcha latte. I promised myself some really nice matcha from somewhere like Sazen or Yunomi and an actual matcha bowl (been using a small cereal bowl for YEARS) if I drink through all/most of the grocery store matcha I’ve collected. I think I have another pouch of Jade Leaf culinary grade, a bunch of the little packets of Jade Leaf ceremonial, several tins of Aiya (clearance sale!) and maybe some Republic of Tea and a couple others.

I’m not sure if the culinary grade is the same as what Jade Leaf uses in their latte mix but without the sugar but I’d guess they’re similar quality. Definitely not something I’d want to try to drink straight. It has a bite to it when I make a latte to my preferred level of greenness unless I add some kind of sweetener. I wonder if my preference for extra strong matcha lattes comes from starting out as a straight matcha drinker? When I first discovered matcha it didn’t occur to me that it could be made as a latte. I don’t add milk to any other green tea so I didn’t think to add milk to matcha. I also had some hilarious misadventures early on in my tea exploration that resulted in vast quantities of SUPER strong matcha so maybe it just broke my brain a little and I can’t accept a wimpy little latte that tastes like nothing but warm milk. Little story time…I started drinking tea as a broke college kid. A coffee shop I liked to study at sold bulk tea and an assortment of tea paraphernalia but they were still mostly a coffee place. The teas were all different prices per ounce to buy the dry leaf but they were all the same price to buy a pot of brewed tea (really cheap, I think it was like $2.00). I’d frequently buy a pot of tea and camp out for a couple hours studying. I tended to go for the higher end teas to see what all the fuss was about and if they were worth the high price because I was broke enough that I wasn’t willing to spend a lot on something I hadn’t tasted. I’m pretty sure the baristas prepared all the teas exactly the same way regardless of type…x number of scoops into the mesh basket of the teapot, whatever temperature hot water comes out of the coffee machine, leave the filter basket in the teapot so it gets nice and over brewed if the customer doesn’t realize it should probably come out at some point. So one day I decided I’d get the matcha. Yeah. They must’ve scooped like $40 worth of matcha into the teapot brew basket and poured in hot water just like they did with any other tea. It was…intense. I think at that point I’d only had one other matcha and didn’t really know if I was preparing it correctly but I knew enough to know the teapot full of green sludge I was handed was weird. I remember looking in the teapot when it was nearly empty and seeing a big blob of wet powder still in the basket. Perhaps that wild experience is why my matcha lattes tend to be more matcha with a splash of milk than milk with a splash of matcha? Who knows.

oh I love this humorous tea note. $40 worth of green sludge. Tea people, I tell ya. haha :D

I’m sure the baristas were doing the best they could with the amount of tea training they were given…it’s just kind of weird to me how many places around here want to be known for their tea selection but give their staff next to no training on it.