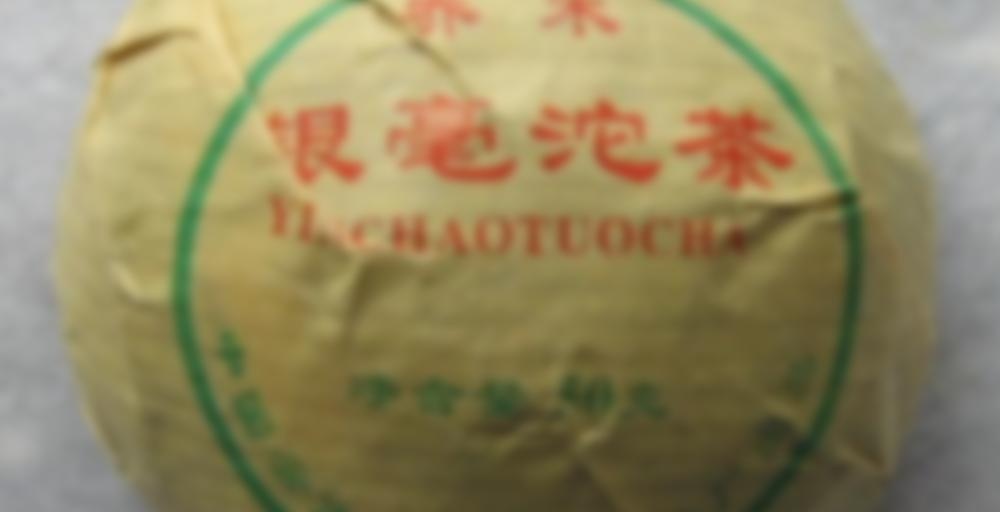 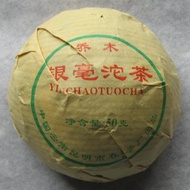 by Kunming Chuncheng Tea Factory
80
You

This is a small tuocha made of raw materials from Lincang area. The infused liquor is very aromatic and has a pretty and clear golden color. Good sweetness and a light pungency go nicely hand in hand.

Notes on Jan.22nd, 2012. After being stored in Indianapolis for 5 years, something has happened to it. The aging element does kick in as witnessed by the color of the brewed soup – it becomes light reddish, oily with certain thinkness. The original floral scent is disappearing, in its place, there is vegetal aroma, a very surprising/interesting result. If I was not told I was brewing this tuocha (I had not touched it for a few years), I would think it’s a Xiaguan tea.
‘Yinhao’ in Chinese means Silver Buds in English.

I got this from Puershop Canada.

So it’s a ‘silver bud tuo cake’ put together in a Kunming factory from (what looks like) Spring Lincang material. It could be a later picking though, as there’s quite a bit of stem.

Dry Appearance:
A 50g tuo, so this is a bit on the ‘mini’ side and very simple in terms of packaging (doesn’t strike me as very fancy stuff). Also fairly tightly compressed. That combination could lead to a lot of powder or broken leaf. It might be a good contender for me to test ‘steam’ a tuo.

Nicely browned with age, a lot of hairy buds and tips are visible (and a fair bit of stem, which makes me suspect this is a later harvest). Pleasant but subtle dry leaf scent (floral) with a fairly heavy rolling on the leaves I’d guess (as it’s fairly dark).

I followed the brewing guidelines provided. So, a 15-20 second rinse followed by fairly long steeps (First steep 15s, 2nd 10s, 3rd 15s and so on). I coudn’t seem to over-brew it, which is nice. I even forgot about a steep and let it sit for a minute or two but it was still perfectly drinkable.

The long rinse helped to open up the leaf and provides a very thick-bodied, gloopy and oily soup with a deep amber shade and a nice aged smell.

The wet leaves are very fragrant indeed with a green wood aroma and edge of spiced bark. It’s bordering on a cedar resin in odour. (Edit: The cedar/camphor smell really picks up after a few brews).

I was worried the long steeps would end up undrinkably bitter. But tastewise it’s a pleasure. Echoes of smokiness are still there in the background, and there’s definitely some astringency (in the earlier steeps), but very little in the way of bitterness or harshness. It definitely has a nice rounded taste.

A thick, oily mouthfeel with dryness on the tongue with a bit of a camphor ‘tingle’ later on (steep 4). The main attraction is definitely the mouthfeel and the camphor (though it’s fairly light).

For only 5g per brew, this seems to make about 4-5 solid infusions. Definitely worth its pricetag, but boy, it still has a kick and you don’t need to use much leaf.

After that, still pleasant (and a bit sweeter) for another 4 infusions, but the soup thins a bit after the third steeping (or possibly you just need to steep much longer).

It’s an ‘intense but short-lived’ sheng, that I’d put down to the seemingly heavy rolling on the leaves. That can be quite nice, just don’t expect a huge amount of steeps.

Strong in terms of energy/effect as I was feeling quite happy after the third glass.

Excellent value for a ‘budget’ aged sheng and highly recommended if you want an affordable option to hit a few times a week.

I’d say this is 3-4 star tea right off the bat, and I’ll keep experimenting with it. I wish the tuo were larger and I might have to get some more.