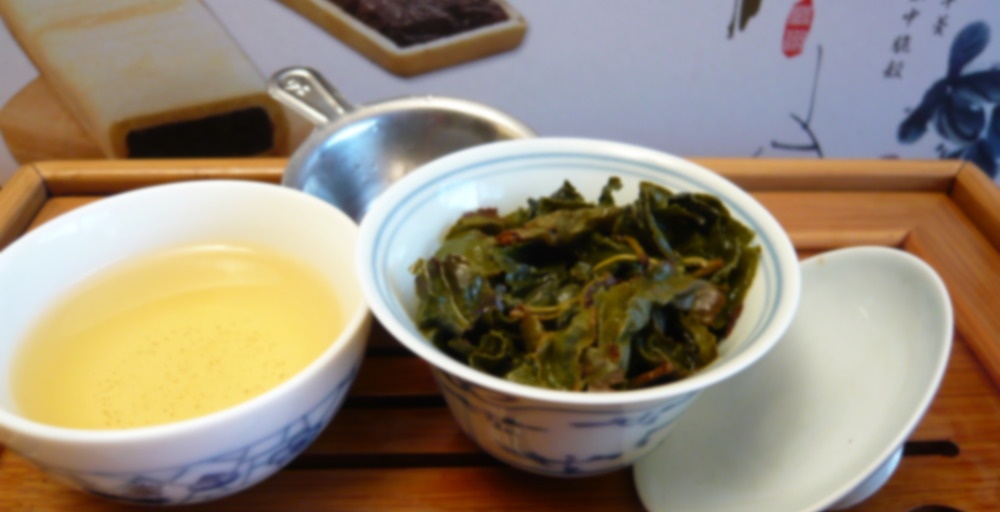 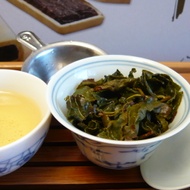 by Life In Teacup
82
You

Brewing method for oolong, ball-shaped dry tea leaves:
Vessel: gaiwan or small teapot
Water temperature: newly boiled water (nearly 100°C or 212 °F)
Amount of leaves: 5 gram for every 120ml total volume (Or reduce the amount to 3 gram for some heavy oxidation and/or heavy roast products)
Warm-up infusion: pour hot water in the vessel, and immediately drain it. Wait for about 1min. before starting the next infusion.
Time for each of the first 3 infusions (after warm-up): 20sec. (Or reduce the infusion time to 10-15sec. for some heavy oxidation and/or heavy roast products)
Extend infusion time based on taste for later infusions. Most oolong tea can well last for at least 5-7 infusions.

Well this smells just like summer would…sweet and full of nature. Sweet Grassy/Floral smells. Lovely. Once infused the leaves are very big! A nice bold oolong taste – woodsy yet sweet!

Today I brewed my homemade teabag, for the first time! The little baggie came in last week, and I tried its sealing effect by putting a small bunch of Sweet Summer Oolong tea grains (weighed later and turned out to be about 1.5g) in the bag and sealing it with a hot pad sealer. The bag works out perfectly. I thought, it could be a convenient to steep! Convenience, sometimes, is appreciated!

Today I came home tired and hungry. After a big meal, I was full and tired, and terribly needed some oolong. Too lazy to do anything, I started brewing my test drive teabag in a mug with half thermo of lukewarm water from yesterday. The water was probably only 150F. After several minutes, the first infusion of the tea was sweet, with a tiny bid of the honey flavor that features this tea. Then I realized boiling water couldn’t be omitted, boiled some water and steep this small teabag again. This time the tea totally came into life. The tiny tea grains soon expand and make the teabag look like a small green pillow. The liquor is light golden with a green hint. The tea is not as strong as my regular dose, but is mild, sweet, slightly peppery, and gives a honey feeling at the throat. This small bag of 1.5g tea lasts for a few flavorful infusions. And I am going to keep brewing it for several more infusions tonight, so to make my evening well-hydrated and low caffeine!

I chose Sweet Summer Oolong to test drive the teabag idea because I always think it’s a very easy-going tea. Throw it in water any way you’d like. It won’t be ruined. Today’s tea demonstrates that when it comes to tea, it’s ok to be lazy, just don’t be too lazy to make boiling water!

was this just a paper tbag you sealed? (like the tsac ones?)

Yes the texture looks like the regular commercial teabag. Before this I didn’t know the paper could be heat sealed!

First Steep: Color is a bit like a glass of white wine. This is smooth and very bright. The primary flavor is floral, but it’s paired very nicely with a clean and fresh note. There is a very faint sweetness towards the end of the sip. Yummy!

Third Steep: Buttery scent has disappeared and now it’s all about those floral smells! Smooth, but more astringent. I imagine a big, fluffy flower that unfolds with each sip.

Fourth Steep: I’m not getting a large difference from my last cup. It feels a little bit heavier on the tongue, but otherwise I am just tasting mellow floral notes.

This is a nice oolong tea to have when you aren’t craving something more specific. It’s enjoyable… I wouldn’t go out of my way for this tea, however. There are other oolongs that I like more, but this hit the spot this afternoon.

This morning, I decided to try Taiwan Sweet Summer Oolong for the first time. The leaves smell woodsy, kind of herbal.

I brewed it at 205 for 3 minutes. The leaves expanded tremendously! I think that surprised me the most. They completely filled the basket on the Breville.

The scent, once steeped, is slightly sweet, kind of like honey, but without the weight or heaviness one would associate with it. The taste, yes, is also sweet, but with a touch of floral notes. Like an orchid, almost. It’s a nice tea, not as strong as I thought it would be based on the previous reviews. It has a slight tinge of bitterness and doesn’t seem quite as forgiving of a longer steep than other oolongs I’ve tried. Still, it’s very good.

Light and airy golden green oolong with a surprisingly rich homegrown vegetalsweetness. Low maintenance, down to earth, and easy to hang out with(as every good hippie should be).

The leaves don’t smell as fresh as other oolongs did these days. So I guess that this one should be quite different. But the charm of it is that you never know…
This one smells like a really hot sunny day. The kind of day thats outside right now.

First of all I steeped it on lower temperature (lazyness). Color is light green-yellowish. Smells like green tea :) It’s super smooth. Sweet and floral. I’m really surprised with the fullness of taste in my mouth. I’m loving this one!
Very delicate yummy oolong…

This is a very assertive tea! Right up front, this tea says, Hello there, you’re drinking some mighty fine tea, aren’t you?

I gave this tea a rinse and then steeped it at my standard cooled-for-greens temperature (I don’t have a thermometer, so this is all approximate) for twenty seconds, because I’d read the directions from Life In Teacup (near boiling, twenty seconds) and then failed to fully follow them. I was nervous about the short steep time until I smelled the leaves steeping: they smelled extremely strong! The first steep was a very light yellow-green and it tasted a little light as well, probably because I’d used the cooler water, but it was definitely tasty. I was a little worried because it was a tad rough-feeling in spite of the lightness, so I went back and checked the directions, which is when I noticed my temperature mistake! Second steep was hotter water for another twenty seconds and the color was a noticeably darker yellow. This time the tea was smoother and had an exciting sort of peppery taste. Third steep like the second, and the tea is less peppery and more fruity. It still has that strong, dramatic tea taste over everything!

I really like this oolong because of the consistent, yet mellow sweetness… you can also smell/taste the vegetal notes which blend in at the right level to compliment. Simple, relaxing, great choice for after a meal.

You come to expect a fair amount of the same thing with these greener style of oolongs: orchid floral notes, a light sweetness and not a whole lot of infusions. This tea however offers up a little more.

The name almost perfectly describes this tea. Like a late afternoon in early May before the heat really sets in but leaves you with a sticky feeling nonetheless. The aroma is floral with strong vegetal notes and a little malty as well. The tea ‘soup’ is quite smooth and fills the mouth nicely. It has a very well-rounded flavor that doesn’t just sit in the top of the mouth and disappear after swallowed. The aftertaste leaves behind a very comfortable malty-sweetness, but only just. A friend who I shared this with also described notes of mulberry leaves, although I’ve never had it so I’m taking his word for it.

But, like other green oolongs this one is somewhat shortlived. Only about 4-5 infusions. Maybe I should use more leaf. Smooth, sweet, and very, very comfortable. All-in-all not a complex tea, but one that offers something different in the way of green oolong.

This fragrant, flavorful tea has captured the summer in its tightly furled deep green and olive tea leaves. It has sweet grassy and floral smells, and once infused is like drinking in the warm flavor of roasted nuts while breathing in the honeyed aroma of summer’s wild flowers.

This tea is awesome and very good. It’s quite resilient and would make a great everyday tea. For pictures and my full review: http://www.leafjoy.com/2010/12/taiwan-sweet-summer-oolong-life-in-teacup/