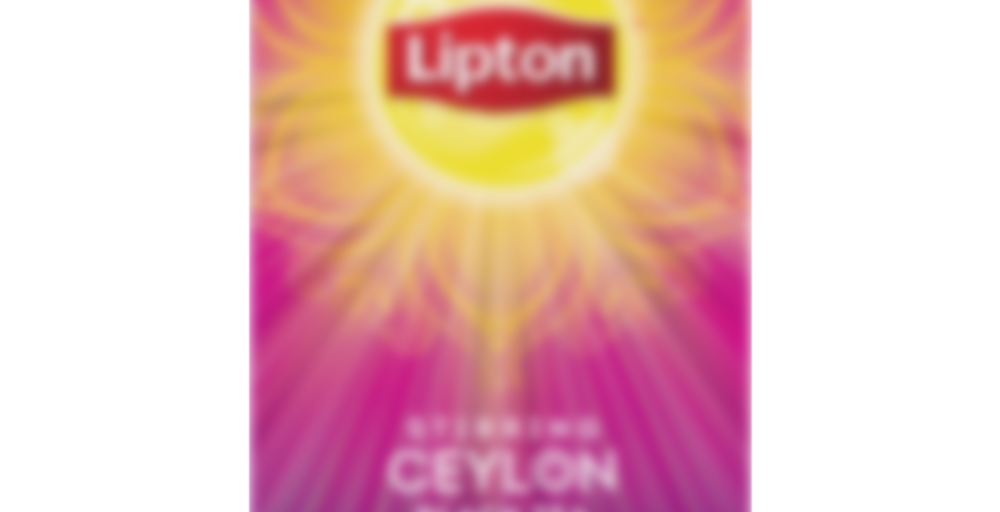 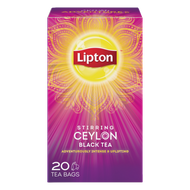 Lipton Stirring Ceylon Tea is a gently rolled, traditional Black Tea. We’ve carefully selected the finest tea from Sri Lanka, the Pearl of the Indian Ocean, (formally Ceylon) to bring you an intense and uplifting taste. Our tea has a bright, lively and clear amber color and delivers an enticing aroma that will delight your senses.

For a full-bodied flavor, simply infuse your black tea bag for two to three minutes in hot water, until the tea is a deep and intense shade of amber.

You can brew it for longer (if you think you’re stronger), or add milk (if that’s your cup of tea). Lipton Stirring Ceylon Tea is conveniently packaged in 20 individually wrapped tea bags and contains 60mg of caffeine per 8 fl oz serving.

Sampler Sipdown September! So, this is probably the most non-traditional tea review on this site? Maybe? Because I have a confession… other than using this in a batch of iced tea once (and it was mixed with some Stash Lemon Ginger), I’ve never drunk this stuff. (For the record, that was one of the worst quarts of iced tea I’ve ever had to put myself through, and I had put absolutely gobs of honey in the thing trying to make it palatable).

Truth of the matter is, I’m not really a fan of plain ol’ black assam and ceylon teas to begin with, so a plain ol’ Lipton bagged black tea? Hell na. This box was gifted on me by a former volunteer in my department at the library, who handed me a bag of her tea cupboard de-stash of boxed teas, and I took it all home to sample. I never really wanted this, but I have a hard time throwing tea away (I did end up having to throw away the Traditional Medicinals Raspberry Leaf she bestowed on me after sampling it, though… that stuff was just too nasty.)

So I’ve now used this up with hardly any of the stuff having to actually touch my tastebuds. How? I’ve been using it up making black tea hair rinses! Yes. The boatloads of medications I’m on for migraine coupled with my PCOS-hormonal-rage cause a ton of shedding, and apparently black tea is a natural way to help with that (yes, I’m one of those weird “natural” people when it comes to my hair, I won’t put any weird chemicals/dyes/what-have-you in it). I’m also hoping that it might naturally color my grays (I have a ridiculous amount for only being 36), but haven’t seen any results in that department, yet.

My regimin has been three of these teabags plus four teaspoons of loose sage herb (which is supposed to naturally help with the grays) steeped in boiling water for five minutes. I strain and let it sit in the fridge when I go to wash my hair, and by the time I’m done, I take the tea out of the fridge and it’s still warm but cool enough to apply without fear of scalding. I pour half in an applicator bottle and half in a spray bottle and thoroughly soak my hair in the black tea. I let it sit for at least ten minutes, then do a two cup rinse that is one part apple cider vinegar and 3 parts water since the apple cider vinegar helps act as a sealant. Because the caffeine in the tea can be drying, I put a nice honey and sage deep conditioner on, let it sit for about 20 minutes, then do a luke warm rinse. Hair is very soft afterwards.

Shedding is still pretty bad when I wash, but is already noticably better day-to-day when the hair is dry, and breakage/split ends is much better too. No coloring of the grays yet, though. The Lipton is gone now, and this was a great way to get it out of the cupboard. Now I’ll just start using my “less loved” loose leafs (those more bitter/astringent blacks that I rarely feel like drinking!) up this way!

Got Lipton? Making a hair rinse out of it is always an option!

I hope that iced tea wasn’t made after I suggested you trying a lemon ginger tea iced. If so I feel terrible!

Stash’s Lemon Ginger was just bad, and I was trying to find a way to use it up so it wouldn’t be in my cupboard anymore (cause I feel bad to throw things away). I actually really liked the Twinings Lemon Ginger I tried the other night, it was just the Stash bagged one that had a taste that was really unappealing to me. I thought if I mixed it with black tea and lots of honey I wouldn’t notice all the artificial lemon taste and the overwhelming strong ginger, but… it didn’t really work. It didn’t help the black tea was also gross. I still drank it, though.