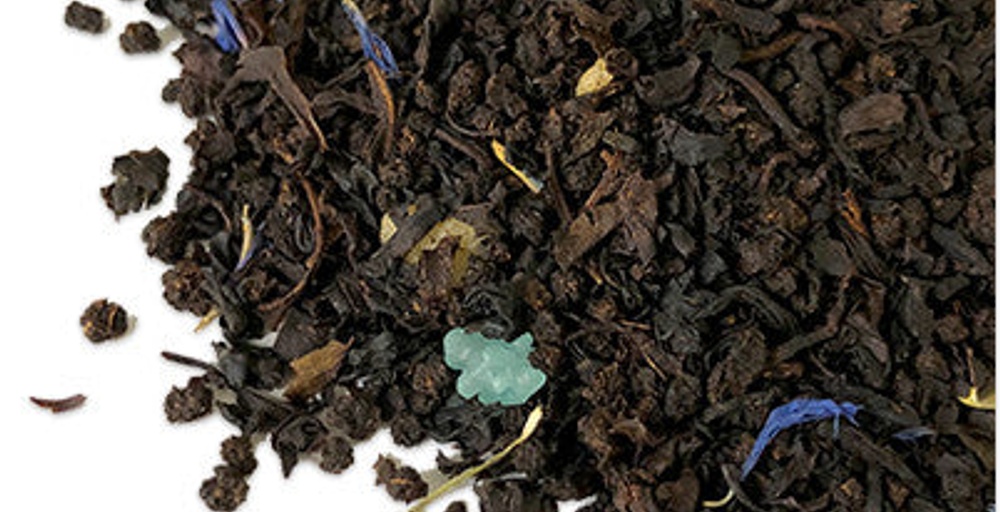 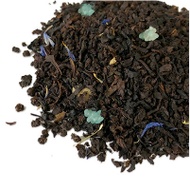 This is one that Auggy shared with me recently. I don’t know if she had been peeking in my posts when making that decision or not and seen that I had been rather vanilla interested lately. Even to the point of having an exchange of comments with someone (who were you?) about the sugar-y sort of vanilla versus the coconut-y sort of vanilla flavouring and them liking the former, me leaning towards the latter. This one has coconut in it as well as dried pineapple, so it must surely be the right sort of vanilla flavouring for me.

But how did she know?

There’s something in the leaves. Some sort of crystallic blue-y white thing. I can’t tell what it is and the description of the gives no clue. So I ate one. It tastes sugar-y and vanilla like, and it looks like after after steeping they have been dissolved as I can’t spot any in the spent leaf.

It smells like cake. There’s tons of vanilla in this aroma and the pineapple underneath it all, at the very bottom of the aroma, giving it substance. It makes me want upside down cake. And custard. The coconut is there in the aroma as well, but it works more like a booster for the vanilla and a filler for the the pineapple rather than a note by itself. I suspect this is what creates the whole ‘cake’ thing.

Oh Auggy! You sent me happiness in a tin. It’s so vanilla-y, so fruity, so sweet, so thick and creamy, so ME!

It definitely confirms for me that my perfect vanilla tea does indeed have those coconut notes to it. The coconut is really carrying this vanilla and enhancing it in most wonderful way.

The pineapple is still taking a backseat to the other flavours here. It’s there at the bottom being juicy and fruity and reminding me of cake (I want caaaaaaake!!!), but it’s not the star of the show and it’s not trying to be either.

This is very very good indeed. I shall hoard the remainder of Auggy’s generous gift.

You and I chatted about Caramel Vanilla (me!) vs. Coconut Vanilla (you!). : )

Ah right, it was a Mighty Leaf thing, wasn’t it?

Hmm..I think it was in my post about 52Teas French Vanilla Assam, which I moved along because it was too coconutty. I don’t think I’ve had Mighty Leaf tea yet.

Hmmm… I had seen the Mighty Leaf around as well and whoever’s post it was made me interested. It must have been at around the same time as your post for me to get them mixed up. Either way, I’m planning on giving the ML a go. :)

Yay! Glad you liked it! This one didn’t strike me as overly Hawaiian (which I felt it should have been since it was one of the Hawaii-only ones) but I totally got a dessert vibe from it that made me happy. And your log of it made me bust some out this morning! :)

The vanilla scent is immediately intoxicating upon opening the package. There’s something pretty and blue amongst the leaves, too, and I’m not quite sure what it is…along with the chunklets of dried pineapple and coconut shavings in the tea.

The vanilla scent vanishes directly after pouring the water over the tea, but comes back in a slightly mellower way after a minute or so of steeping. Pineapple and coconut scents aren’t really evident, but you do get some mellow, sweet pineapple flavour, as well as a hint of coconut toward the end of each sip. The coconut is the only flavour that lingers in the aftertaste as well. It’s not strong, but it’s definitely there—-more like an intangible idea than an actuality.

As for the tea itself, it’s slightly weaker than I usually like. Perhaps I should have flouted Lupicia’s rules and gone for 6 minutes. If the tea were stronger, I’d probably have liked this more. I was worried the vanilla might be overpowering since it smelled so strongly when first opened, but it was actually quite nice.

It’s quite nice to look at, a rather nice dark gold with coppery undertones. :)

(Side note: Lupicia recommends 3-5 minutes for steep time, using boiling water. Generally, when I brew most teas, I tend to veer toward the longest time suggested because I prefer a stronger brew. )

This was a free sample in an order I placed a few months ago, and since it feels like summer outside I thought it was a good day to drink it.

I mostly taste peach, and the black tea base is a little brisk. I bet it is best with milk and sugar. It isn’t bad, but it isn’t one I feel compelled to buy or try again. I like Merci Milles Fois much better.

Sipdown 86-2021
Received this as a sample with a Lupicia order, which I was excited about, as I was considering purchasing it. While it’s a fine tea, it’s not particularly special. Not getting any of the mango or orange that the Lupicia website describes, but I am getting a lot of peach. Glad I got to try it, but also glad I didn’t purchase it.

Yay, caught up! This is another one from the last Lupicia group order that I haven’t tried yet.

Apparently this is supposed to be peach, mango, and orange. Mostly I get a generic tropical flavor, which could be mango-esque. There is also something that reminds me of Peachy-O’s, so I suppose that would be the peach.

Overall, it’s a muddled sweet tropical fruit sort of tea. The base is partially CTC, so it’s a bit too brisk for me. I’ll have to try it as a milk tea though!

Yum, this was a fun, tropical fruit tea. There are these little green rock candy stars sprinkled throughout that add a wonderful sweetness to the tea. Lush, juicy aromas of mango and passion fruit. The tea is malty with a beautiful red color and bright tropical notes of pina colada and mango. Re-steeping produces a cup that’s less fruity but honeyed with soft floral notes of jasmine flowers.

I love when they put those konpeito in the tea, they’re so cute!

Ah, so that’s what it’s called.

From the Holiday TTB

I didn’t think I’d get a chance to try the Hawaiian exclusives from Lupicia so this was the first one I decided to try. It’s a fruity black tea, but the fruit flavors are a little muddled, even more so as it cools down. It’s quite dark too, in a coffee kind of way. I guess it reminds me of a fruity coffee? With a slight hit of malt towards the end of the sip. It’s an interesting tea, but not something that tickles my senses overly much. I’m glad I got to try it though.

I found a lot of the Hawaii blends to be boring with only a couple winners in the mix. So much potential, so little delivery.

Interesting. My tin sticker is different then the one in the pic here.

Though I’m not a huge fan of black tea I do like to try as many different teas as I can. This one reminds me if a shaved ice flavor I got once, or maybe the mixture of flavors. I’m enjoying this one more then I thought I would.

I’m going to start a tea box in the next few weeks and will put some in there for u if u want to join :)

I was excited when Ost send me this, as I had completely loved another of the Lupicia Hawaii teas, Loke Lani. So I was more than happy to try this, even if it did have pineapple in it. (Pineapple? In tea? Hmmm)
The first surprise is that it smells quite creamy. There is absolutely a vanilla smell to this. Awesome! I love vanilla!
The vanilla does sort of fade to the background of this flavor, I must say. Its there, but it has faded down.
There is pineapple in this, I can see the little chunks! But I cannot really taste it, or really much of any fruit flavors. It seems to be a black tea with a vanilla aftertaste, and a slight tang to it. So maybe that’s it? The pineapple lurking?
Completely inoffensive, but, for me, not particularly memorable. I’m glad I tried it!
Sipdown!

Hmmmm, this is nice. The flavors could be a little stronger. I can pick out creamy coconut over other fruity flavors. I think I taste the pineapple. No bitterness from the tea base. It’s nice with a little sugar too, seems to make the fruit a little richer and bolder. I like it, but I don’t think it’s a must have once this pack is over.