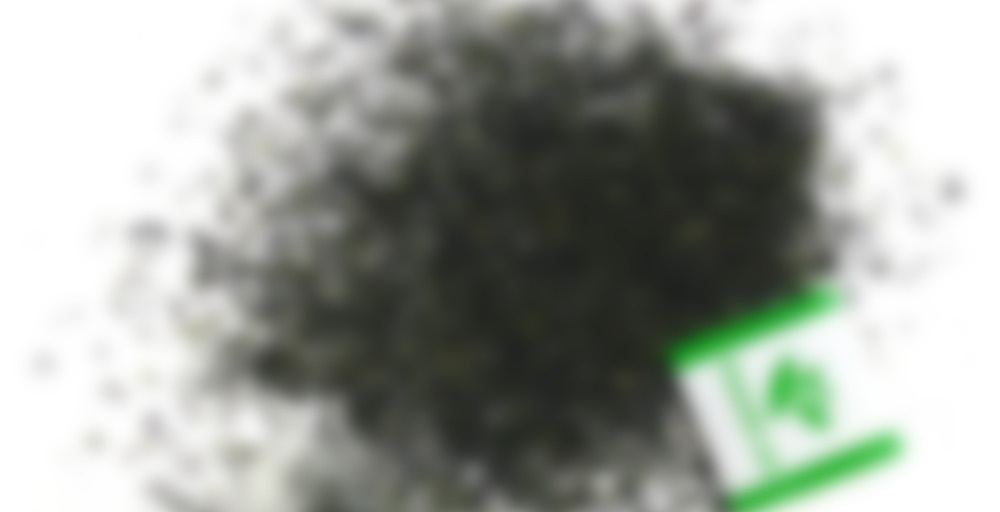 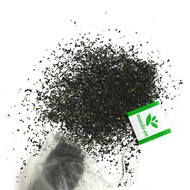 Craving a good cup of gyokuro, but not in the mood to deal with the mess? We have just the solution for you!
Maeda-en is proud to offer you deliciousness and convenience all at the same time: crushed blue-green Gyokuro leaves are packed in mesh pyramid bags for maximum steeping & easy clean up. It brews the beautiful jade liquor, and tastes just like a whole leaf brew!

So I wanted a plain green tea late at night and wasn’t sure I wanted multiple infusions. When, I don’t know why, I remembered these teabag samples included with the tin of Shincha I won from them. So I took them down, looked through them, and selected this one because two of the others were toasty roasty kinds and the third was sencha which I’ve had been before and are usually nice but not great to me. So I selected the Gyokuro, not knowing anything about it.

The teabag packet had no steeping instructions so I pulled up the Maeda-en website on my phone and easily got them off there. Plus I noted that they described gyokuro’s as rich, grassy, and savory. I opened the packet and omg did that teabag smell good! Rich! Savory! But most seaweedy / kelpy than grassy to me.

I steeped it in 8oz of water instead of the recommended 6oz. Both the first and second steeps were plenty strong. I sipped. OMG sushi restaurant tea!! Awesomesocks!! I drank it, I resteeped, I drank that. I resteeped again in the morning. But that steep was more water than tea. Maybe if I hadn’t let the bag sit overnight it wouldn’t have been.

I want more of this tea. Either in bagged form or loose leaf. It would be so good to drink with Asian takeout.

Take this approach for a spin. Gonna give it a go myself and report back.

I received this sample a while ago (about a year ago?) … had it stashed away and forgotten until going through my stash last night.

This is a pretty decent Gyokuro – certainly impressive for a bagged tea. Light and clean, very fresh tasting – especially noteworthy since I’ve held on to this for a year.

I can believe that a gyokuro would ever be put in a bag…I’m sure some poor tea farmer must had commited seppuku…..

It probably shouldn’t have been… that being said, it was still very good.

well maybe the poor Japanese farmer had somebody to second him then :)

I have been feeling guilty for not tasting tea samplers right away. I can’t seem to keep up since I tend to run back to my usual brew after a few new ones. Nice one year held. I am a beginner, no way near having something for a year as yet.

My day has been given to Oolonging the brew.

Full disclosure: this tea was sent to me as a free sample by the vendor. However, there was no expectation that I would provide a review.

Gyokuro is probably my most preferred Japanese style tea, so I’m eager to see how this tea-bag example show.

160F water for about 2 minutes. Clean bright lime green soup. Flavors and textures are hearty and satisfying, if a touch light. The flavors are clean and enjoyable, though, with bits of orange-like citrus, a faint glow of pine, and some sweet grasses. Nice lingering sweet silkiness on the finish.

This was a bit light for my tastes and I might have brewed it a little longer with less water next time, but for a tea bag, I thought this was decent brew. Nice clean flavors.

I tried the tea bag sample of this last night.
I have no real experience with gyokuro (though, I’ve been intending to try it)…the only time I’ve had something like it was not great (Gyokuro blend Sencha by Yamamotoyama… I don’t recommend this really).

Like others mentioned, the flavor wasn’t very strong. I used 4oz of 160 degree water, and steeped for 2 minutes. While it did have some watery flavor, the tea flavor was excellent. Pure sweetness and an aftertaste that was also a little sweet but filled the mouth. For a teabag, this was really good tea (and got multiple steepings)… I would buy this if I found it in the Japanese store and wanted to get a good quality tea in bags.