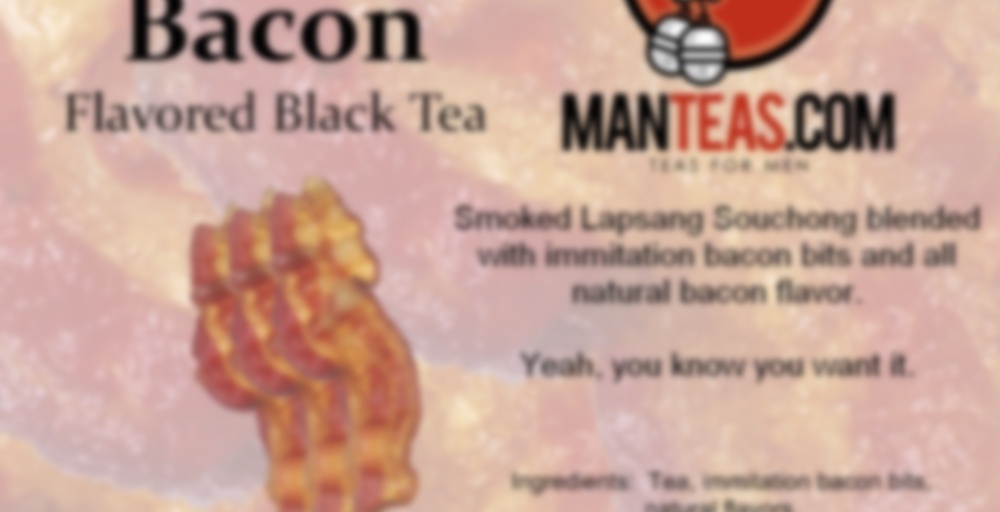 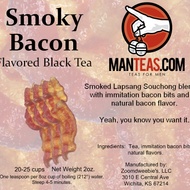 This one is a blend of Chinese Lapsang Souchong (tea that has been smoked over pine logs), imitation bacon bits and natural bacon flavoring. Ooooweeee!

We here at Zoomdweebie’s (where we are “Nerdy About Tea”) have started this website to showcase only the manliest of teas. You won’t find any rose petal teas here, or any teas that smell like your grandmother’s air freshener. This is man tea country.

I think this is more authentically bacon-y than Maple Bacon—the smokiness makes all the difference. Lapsang and bacon are perfect partners! This tastes like grilled Canadian Bacon. Grilled over mesquite in the middle of a pine forest.

Maple Bacon is for breakfast with pancakes. Smoky Bacon is good enough for dinner with a hefty meat course.

In one word: Delicious!

I might need to try this one. My Maple Bacon was a dud.

Another tea from Harney & Sons (the store). Had it w/ chicken wrap using their Lapsang souchong cheese). Same base tea, 2 different flavors.

When I smell the raw leaves, I can tell this isn’t your ordinary lapsang souchong. Instead of smelling like you’re standing over a camp fire, it smells like you’re in a smoke house.

The liquor is a medium dark brown with reddish tones. It doesn’t really smell like bacon, more like beef jerky.

You’ve heard of Liquid Smoke? Well this is Liquid Beef Jerky. Seriously. Like you’re drinking it thru a straw. They nailed the beef jerky, I think a name change is in order.

This isn’t personally my cup of tea, but I had to give it a 100 because of accuracy. Even though it’s more beef jerky rather than bacony, it’s definitely meaty. Maybe a little salt would bring out the bacon specific flavor more?

Yeah, they nailed it.

3rd infusion, 7 min. The liquor is now a camel color w/ orange tints and the flavor is slightly lighter than the 2nd.

4th infusion, 8 min. The liquor is liess orange now and the flavor is much less smokey.

This is one of the teas that I got as a “thank you” for contributing to the indie gogo campaign to reopen Zoomdweebies. Of the three in the ‘bacon’ set, this is the one that I hadn’t tried. And that’s mostly because of Lapsang Souchong. But, I’m glad I got to try this finally, because it’s pretty good. I did a rinsing of the leaves (15 seconds) and this helped eliminate the really strong, off-putting smoky notes that I get from Lapsang Souchong.

I do think that this tea would have benefited from a slightly lighter (or more complex?) base. Maybe not just Lapsang Souchong, but maybe a blend of Lapsang with Keemun and a little bit of Ceylon to round out the black tea base. A less robust tea background would have allowed the flavors of bacon to develop, I think.

The bacon notes are not completely overwhelmed by the lapsang, but, they are slightly obscured. I would like more bacon in this one!

I’ve had other bacon teas from 52teas/Man Teas.
Can’t do this one. Offensively smoky, offensively salty.
Can’t drink it. I really liked the maple bacon, but this is just wrong.

I made a cup of this tea because I was craving lapsang souchong. I had already had a cup of lapsang today so I decided to go with this because it was something a bit different. I added some maple butter to it, because I apparently have no maple syrup in the fridge (or its in there and I just can’t find it – who knows). It was pretty good. Gave it a sweet and maple taste to it. Worked well with the smokey bacon taste. However, I had it in the afternoon and I think it is more of a breakfast/morning type tea. I just didn’t find it as enjoyable in the afternoon. But in saying that, my usual pattern is lighter teas/herbals in the afternoon. Crazy how your body can tell the change in routine.

Try adding maple syrup to this one.

More bacony today in both scent and taste, less so in taste than in scent. It’s not a mouth full of ash today as it was yesterday in any case. Perhaps it’s because I used 212F water instead of 205?

Not enough improvement in either the overall experience or the smoky bacon flavor department to merit revisiting the rating, though. This is now in my sip down as fast as possible pile.

Morgana, have you tried adding a bit of maple syrup to make this more bearable? To me, that sounds like it might have potential. Good luck!

In Montreal, I came across bacon-flavoured bloody marys premixed in cans. I bought a couple. Horrible, horrible. Couldn’t get rid of them fast enough.

LOL. Thanks for the tip, Evol Ving Ness. I fear that adding syrup may make it taste more like bacon rather than less, which, while it would make the tea more true to its name would probably do a number on my stomach. But I’ll give it a try for giggles tomorrow. :-)

This may be good for cooking. I’ve heard people making a lot of dishes with Lapsang Souchong, and since this has a lot of similarities I think it may work the same way! Maybe as a marinade for roast, or in a gravy?
http://www.teachef.com/view_all_recipes.html?tea=lapsang%20souchong

Indigo, that’s a good idea. It could work as a rub, I think.

^^ That is a brilliant idea. The maple syrup might work well in the rub and gravy as well.

Whew – This one tastes like you licked the wall of a smokehouse. To me, I smell bacon amidst the smoke, but it is nearly ALL smoke. And upon sipping it, I really only taste smoke. I LOVE bacon, LOVE smoky flavor, and I think I could have loved this if it tasted more like bacon with a hint of smoke. But the smoke flavor overwhelms to the point where I could barely drink half a cup of this. All points go to creativity though.

Recommended for people who truly cannot get enough smoke flavor. But more likely, this would be better for cooking with to give smokey flavor to other things. I am going to give that a try to use up the rest of the sample.

Great Canadian Travelling Tea Box (pt.1)
I drank this tea on October 6th…. really was not a fave of mine. I Don’t even think that I really even finished a whole cup… could not withstand it :p.

Dry leaf: Black tea leaves with imitation bacon bits. The scent is a very heavy and smoky scent, it was like being in a smokehouse infused into the leaves. I would describe it as very pungent.
Steeped: Super pungent in the sense of the smoky scent, I found it smelled like armpits. I tried a few sips and was grossed out. Yuckkk.

I was wary of this one based on my previous experiences with Lapsang Souchong, but this actually works for me. That pine smoke flavor is there, but it’s accented with an aftertaste of bacon. What does bacon in tea taste like, you might wonder? A little salty, a little meaty, a little smoky, and definitely believable as what it’s supposed to be. It’s not one I can picture myself reaching for often (I have to be in a certain mood to want savory teas anyway), but it’s an unusual cup that’s overall pretty good!