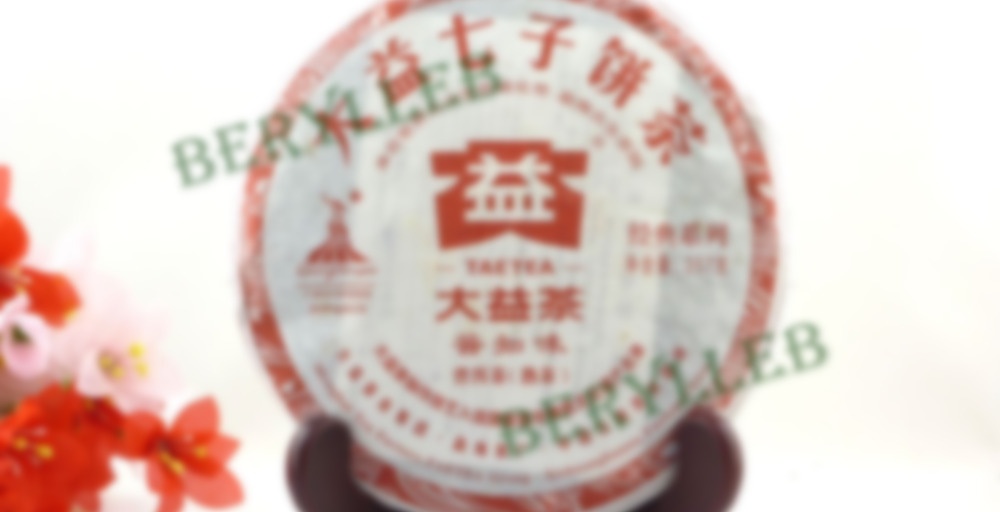 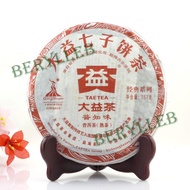 by Menghai Tea Factory( purchased from berylleb ebay)
81
You

Teal Taste is flavorful product newly manufcturel by Menghia Tea Factory in 2009. It is dedicated to promoting the taste of superior Pu’er tea and its core research concept that knowing the original flavor is getting the real taste is embodied by the optimized technology and fermentation control. The cake with tightl packed tip leaves is round and heavy and yields a brownish red color with fine sheen. It brews a bright thick red broth with mellow and full-bodied flavor and faint and pure aroma.. Comparing with the benchmark product of 7572, Real Taste has a lighter taste and better aroma. It is an excellent tea product for most pu’er tea consumers.

a wonderfull pu-erh. i started this one out with about 10 grams in a large yixing. a 15 second rinse and off we go. the first infusion was pale with a good aroma of something sweet. not very strong on the first steep with a hint of something i could not describe. second infusion much darker the same sweetness and there it is a touch of citrus like you would find in an earl grey. i carried this one through 10 infusions before i finally let it go. the middle infusions were very nice with the tea cutting through and finishing with the citrus notes. a very smooth and mot overpowering tea that i will have to add to the list of very good ones.

This is my first sheng, something that I will definitely need to spend some more time with. It also definitely made me thankful that I tried sheng before going in head first with a cake.

Well, this is not to say that I didn’t enjoy it, I really did. thought the whole session there were so many dark notes with vanilla being in front of the crowd. It also had the taste of very dark fruits. I had to add sugar to this tea, because I found that I enjoyed it much more this way. I’m so sorry, but the way that I describe this is as though all of the flavors are in a line, with Vanilla being in front of the line, and something lighter dark along the lines of vanilla following, then a dark fruit taste with a citrus being behind this. Then at the back of the line is the barn yard which definitely came from the smell.

When I first opened the bag there was a very weird smell, something like meat sitting in a barnyard next to a horse. This absolutely terrified me and I thought that I had made a grave mistake. But after a wash and a first infusion this horse and barn walked far away from my tastebuds (not my nose) and I was left in a field of already harvested hay sitting on a hay bail. But with this I was also surrounded by vanilla, lots of it. This tea it encloses your tongue and traps it in this dark taste not too dark. Giving you a pinch of vanilla at first then more and more and more. (forgot to say but these tastes are up to the 3rd infusion) until it is like you are drinking a London fog without any milk at all.

The smell on this tea was the worst part. The taste moves away from the barn, but the smell never leaves the barn. The smell wasn’t as pleasant as it’s amazing taste. But as soon as it hits the mouth the smell runs back behind the fruit taste, and is only present for around a couple seconds then the vanilla and whatever that taste was with it just overpowers. when in my mouth I breathed out of my nose and got nothing, needless to say it is only aromatic when out of the mouth. I believe that this is fermentation, but I’m not sure at all as this is my second puerh ever.

Unlike the sheng that I drank earlier when I felt stressed before drinking this tea, I felt even more stressed after. This may be due to the fact that I am drinking this on the honest day this year outdoors. This tea is definitely one that I would like a lot more in the winter, and I will save it in it’s little bag until then!

Overall this tea hit me in the face with reality of what sheng is. However, I might seem a little bit dull when writing this review because it’s been a not so good day and I was really hoping that this tea would help (I know sheng spoiled me) but my expectations were too high in this category of tea, and it did not meet that. But that’s okay, when looking back on it I really enjoyed this tea’s taste, but I was not a big fan of it’s smell.

[A Day later] Though today (viewer discretion is advised) I woke up with blood all over my face, and pillow. Turns out that one of the teeth that I pulled decided to annoy me today (I had to pull them to make way for braces).

But with that out of the way, I have an intense craving for this tea, and I want to pop the bag open and drink another. I think that my rating was a little low because I drank this in summer, which I think isn’t the time to be drinking such a dark and strong tea. I think that if like now in the early morning it was a little cooler outside I would have absolutely loved this tea. But I still do!

It should air out in a while. That is the edge to shou that many have a hard time with. When you get past the aroma the taste is much different.

Yes, the taste was amazing, but the smell was a big bother. So, would you recommend me leaving out the little hunk of puerh to sit outside for a few hours before I do a session with it?

Air them for a day or so in the open. As shou gets older say 10 years or so this will clear given good storage.

I think I definitely need a lot more experience with Shou, and definitely in the winter. But. I am also very excited to taste some more Sheng, as the flavor notes on them seem very nice for the summer time. But overall, I am still learning, and getting to know puerh.