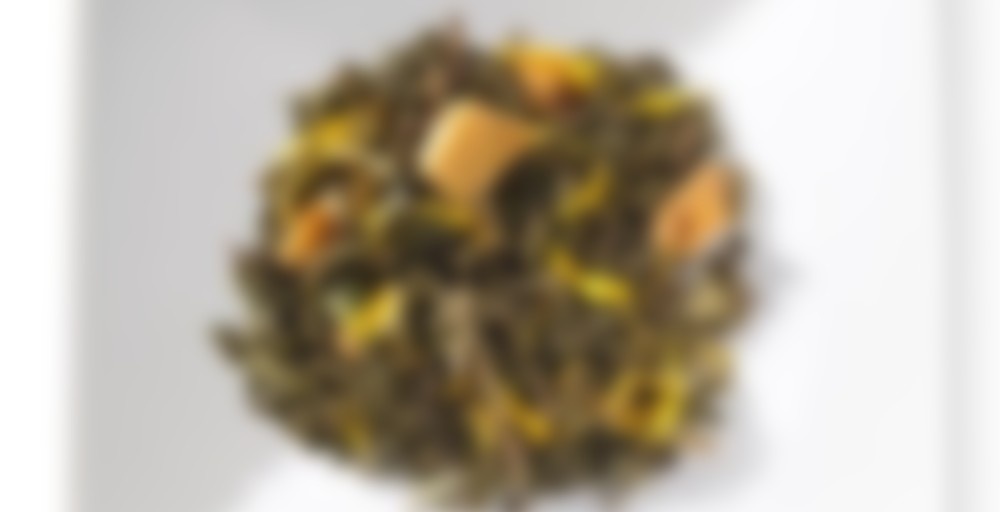 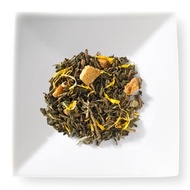 by Mighty Leaf Tea
79
You

Mango Green Tea Decaf, is a sweet blend of decaffeinated green tea from the Korakundah estate in Nilgiri, India combined with mango piences and calendula. With an intoxicating aroma, this fruity and flavorful green tea provides the perfect introduction to those new to green tea, or simply looking for a delicious, caffeine-free green tea blend.

I’m nothing if not a man of science and adventure. I’ll try anything…twice. As much as I love my dirt cheap Adagio Gunpowder, I’ve been pondering ways to shave off a little of the vegetal edge it presents (even though I like it) and soften it with a flavor of some sort. But what to blend it with???

The outstanding feature of the Gunpowder is that it goes down bitter, but leaves an incredibly sweet, lingering aftertaste. Which tea in my cupboard could pair with that bitter-sweet nectar and possibly enhance it?

I went with the Mighty Leaf Green Mango Decaf. When I bought this tea I had high hopes for it as a fruity, tropical dessert tea. Opening the pouch unleashed an aroma that could only be called a mango tsunami — it filled the whole room. Imagine my surprise that this tea came out bitter and harsh in the cup, regardless of how gently and carefully I brewed it. The second infusion was much less bitter, but you have to get past that first cup. So I risked mixing my two most bitter teas to create a tea gestalt — an end product that was greater than the sum of its parts.

The first infusion was just as expected — bitter and slightly astringent, but with a nice fruity punch from the mango. But I wasn’t here for the first infusion. That was just the cross I had to bear to reach the second infusion.

Ahh! The exalted Second Infusion. I’ll cut to the chase and just say that it exceeded my wildest dreams. This was one of the finest cups of tea that I had ever experienced. Smooth, fruity, decidedly green, no bitterness. It was a party in my mouth!

The bottom line is that I took a tea that had been an initial disappointment (the Mighty Leaf Green Mango Decaf) and blended it with something else in such a way as to produce a cuppa that transcended the properties of each component. Yes, friends, a disappointing tea can be redeemed and brought to new life when judiciously joined together with a compatible product. It is a new creation, a revelation, an epiphany.

The more I explore tea, the more I’m finding that I prefer the second infusion to the first for most teas. Gunpowder + Mango sounds really yummy, too.

Yes, I’m finding that to be true, too. I still a total noob, so I haven’t begun to scratch the surface of the serious tea-drinking world, but the technique of pouring off the water after 30 seconds and hitting it with another infusion immediately is starting to make sense to me. Anyone who has tried this technique is abundantly welcome to share their experiences here. For now, I’m too cost-conscious to pour the stuff down the drain. Can I still get as many good infusions if I do?

I’m not that experienced with this, but I think you’d still be able to get as many infusions (or even more) than you would normally after the first cup. For me, sometimes the first cup will make me feel a little sick if I’m not liking the flavors, so it makes sense for me to just toss the first cup and to enjoy the 2nd, 3rd, 4th, 5th, etc. :)

This is a wonderful choice for those who like fruity green teas. The mango flavor is natural and unmistakable without being overwhelming.

This is a wonderful blend of fruit and tea. The mango isn’t overpowering – just the perfect amount. This would be great iced! :9