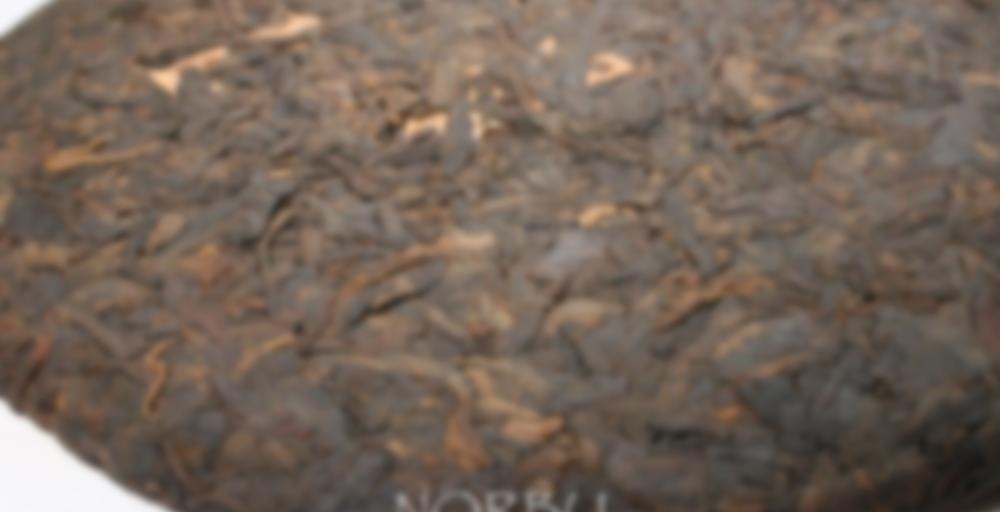 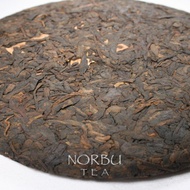 This is an excellent ripe tea from Yong De county, Lincang Prefecture, in the Central-Western part of Yunnan Province. Yong De Zi Yu tea factory produces truly excellent quality raw and ripe Pu-Erh teas, and this one is no exception.

It is composed entirely of Spring harvest 2006 raw materials which were fermented in 2006, left to age for a year, and compressed in early 2007. The “dui wei,” or “fermentation flavor” typical of newly produced ripe tea has completely dissipated as far as I can detect, mainly due to the tea’s age and impeccable dry storage in Kunming since production. The mouthfeel is thick, almost creamy, and satisfying. The color is dark and rich, and the taste is smooth, slightly sweet, and is a perfect example of what impeccably produced ripe Pu-Erh tea really should be (in my opinion at least).

The name of this product as written on the wrapper is “shēngtài gǔshù chá,” which literally translates as “ecological (or organic) old tree tea.” It is called “Ecological” because of this tea’s COFCC (China Organic Food Certification Centre) certification. It should be emphasized that COFCC is not an FDA recognized organic certification in the US, so this product can not legally be referred to as “organic.” Whatever this tea’s certification, it is an excellent quality and delicious ripe tea. A personal favorite to say the least!

Okay, I bought this through YunnanSourcing so I could technically post mine as a different tea since storage conditions are different, but I feel that may be “cluttering” the list. It is the same manufacturer, year, wrapper, mass, and even most of the description. A little more than $7 cheaper even after shipping is totaled in…

This is my favorite organic certified shu bingcha I have on hand. Okay, it’s the only certified organic ripe cake I’ve got at the moment. My bing purchases tend to be sheng puerh, but this was a deal and the price does not reflect the quality at all. I have my $15 cake of this sitting next to a $150 shu from the same year but displaying far less balance. Now, this isn’t big on complexity – sure, there are levels of favors but I don’t foresee this ever blowing me away with range. But it’s durable as all hell and easy to brew. Laid back ripe tea and comforting. I reach for it when I’m drinking alongside food and expect the tea to be the major element of the meal (for instance, I went and got some pot stickers, chow fun, and steamed rice ‘cause I felt like drinking this tea and wanted something to go with it).
I bought this March of last year. It has smoothed out a bit, losing some of the leathery edge it once had and the primary heady stained wood note is now mostly just in the aftertaste on longer infusions. The cake has nice flexibility for a youngin’ – it isn’t very difficult to wriggle free intact leaves or chunks without breakage. Not quite as much give/sponginess as something that’s spent some time in the Xishuangbanna area or Hong Kong, but still soft for only a few years old. This time around, I used a biiiiiiit more leaf than I normally would for casual drinking. Used a solid chunk plus about 2g of loose bits that came off with it.

Used 30g with 200ml in a seasoned shi piao style zi ni yixing teapot. Single rinse to separate a little bit… probably should’ve done two. I feel a little guilty going at this concentration with so few infusions, but boy does the tea taste good at the high end. Used 90ish degree C water for the rinse, 88 degrees for the 1st infusion, 85 for the 2nd, 78 for the 3rd. Back up to 85 for 4th-6th infusions. Steep time was approximate and ran 30, 30, 50, 30, 45, 30 seconds. If I had continued, I would start reducing infusion time to 15 seconds by the 9th infusion since the leaves are only starting to break up from compaction on the 6th brew and a touch of astringency is noticeable in the back of the mouth and throat.

Dry leaves are rich chocolatey brown with the fragrance of leaf litter in a woodland and dry bark. Wet leaf aroma is spicier – stained hardwood, cinnamon, birch, willow, redwood, and rich loamy soil over the leaf litter and mossy base. There’s a wet granite note that pops out saying “Ima gonna be a crisp tastin’ tea!” but contradicted by a prune note that suggests smoothness. Leaves are dark brown to the point of near blackness and leave a reddish stain surrounding themselves. Liquor is clear orangey brown honey color for first infusion, steadily getting darker to an infusion that allows nearly no light through and deep dark brown with reddish reflection in last couple brews. Unfired wet clay aroma to the liquor.

Sweet and smooooooooth. Hearty body. Not quite so thick you could stick a fork in it, but close. Feels like a 1:2 honey in water dilution in mouthfeel and lingering crisp sweetness. Nice florals pop out of the baseline black wild long grain rice flavor. I’m not a big fan of wild rice but like when the flavor presents in shu puerh or some red teas. Florals are mostly in the aftertaste, but include violets, tulip, chamomile, and impatiens. Toasty wood notes – mostly hardwood, but theres a smell of redwood planking being warmed by the sun, buckeye wood and foliage, dried ferns and moss, scrub oak, wheat bread toast, and bay laurel/faint eucalyptus. Right at the end of a draught I get a brief rough patch in my throat and a pruney-cherrywood flavor accentuated by a note of Japanese Maple and tobacco leaves in the nose. Aftertaste is a light woody currant-sweetness and faint but very long lasting honey-and-butter-on-multigrain-toast characteristic. Afteraroma is warming and follows through with the wet granite that the leaf aroma advertises.

Nice noir-ish tea. Really evokes the spirit of a hardwood-bedecked P.I. office, backwater docks in the misty pre-pre-dawn darkness, and cobbled alleyways. Not dirty or dank in any way, but only a little step from it. This tea isn’t really foresty… At lower concentrations and longer infusions it can be like a woodland, but really this puerh is a fairly clean example of a ripe tea.
Satisfying, rich, and mouthwatering.
Nom nom nom.

Steeping about 5 times letting the water I was using cool as I went starting at 212.

Tea wear use was all ceramic.

This tea seemed to me to be lacking in smoothness, a bit bitter, the taste was indistinct and the aroma seemed flat. This is my first Pu erh tea so I may change my rating after brewing it a few more time. For right now I am unimpressed. I have had Pu erh tea steeped for me once before at a tea shop and I loved it but for some reason this just does not stack up.

How long are you steeping for and at what concentration?