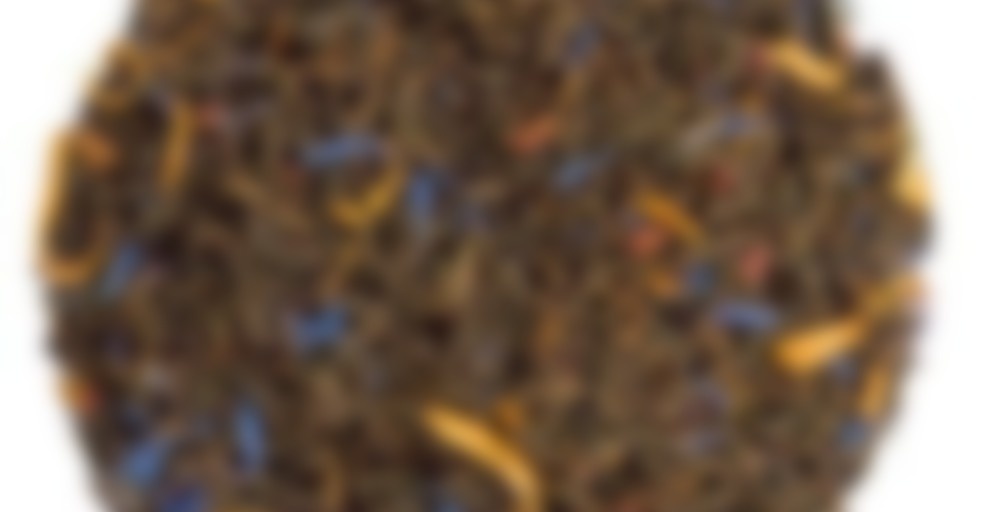 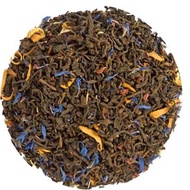 by Nothing But Tea
67
You

Following my next cup with another flavoured Pu Erh after catching the Pu Erh bug today. Well it is hard for any tea to follow after a delicious cup of Pu Erh after all. The snow is still falling and after walking (carefully) through it a moment ago to post jewellery to my wonderful customers at my local Post Office I am cold and in desperate need of being warmed up. The exotic part of this sounds nice right about now (shivers).

While raw this tea is a mixture of brown, yellow and blue in colour with a refreshing woody and orange scent. Not quite as exotic as I had imagined.

Once steeped the tea is dark brown in colour with the usual woody and earthy Pu Erh scent. I can’t pick up the fruit by smell alone which is a shame.

There is a hint of orange in the flavour but the Pu Erh is much stronger than the fruitiness meaning the balance is not quite right. It says their are raspberry pieces in this tea but I can’t taste anything remotely berry like, just the waxy orange and thick woody Pu Erh.

I have Nothing But Teas Orange Pu Erh and it’s nothing like this tea, this is a much weaker version and not as tasty. It’s a shame that it’s disappointing but it’s still good enough to drink and finish my sample pouch. Still I feel the word exotic is a little misleading..I was sort of thinking pineapple or melon…not just orange and raspberry that I cannot taste.

Feeling lazy today, so I’ll make it brief and go do something else.

Not entirely sure what it is that makes this one ‘Exotic’ and frankly I can’t be bothered to look it up right now. The leaves have some bits of something blue in them that is probably some sort of flower, and they smell very fruity and yummy. I couldn’t smell any of the actual tea though.

After brewing I can smell that it’s pu-ehr, but I’m not getting the same memory-sparking inspirational cow-stable smell that I did from the orange one yesterday (which btw was quite nice on third steep in my travel mug this morning). This is rather more fruity and there’s a note of something almost cloyingly sweet. It smells nice but at the same time a wee bit over the top. Try as I might, I can’t make my brain recognise any of the notes in this. I want to stay berries but not quite, and I want to say citrus but not quite and I want to say vanilla but not quite.

There’s definitely orange in the flavour though. I’m a little disappointed by how similar it is to the orange pu-ehr I had yesterday. It’s like it’s that one at the base and then they just kept building on it. At this point I have to look it up and see what is actually in it. NBT says ‘natural flavours, orange flowers, cornflowers and raspberry pieces.’ So I called the orange, definitely, and I called something berry-like. I’m still not sure that cornflowers have an actual flavour as such or what they’re supposed to taste like if they do, but they seem to be a fairly common addition in tea blends. Natural flavours of what? That could be anything but I’m guessing the oranges and raspberries.

I would say, yes, it definitely tastes exotic. But I just don’t think the flavours really fit in here. I’m not really sure that I think pu-ehr and berries work all that well together.

Cornflower are an actually flower. You see them planted in the gardens a lot around here (although we tend to call them Bachelor Buttons). I don’t think they really add anything to the tea apart from looking pretty, though. :)

Yes, I know that, we have tons of them here. I mean if they have an actual flavour.

Hmm. I don’t think that I like this pu-erh as much as yesterday’s plain one. The dried leaves smelled exactly like the citrus meringue cookies I’ve been snacking on this week, so I had high hopes! But the citrus flavor overwhelmed all of the tea flavor without giving anything in replacement except a lingering sourness.

(Still, thank you, Angrboda, for the sample! I would have thought that this one would be more to my liking, so you have saved me from this mistake!)

as i recallb i wasn’t a big fan of this one either, but i was trying to be as diverse as i could.

It’s a great selection! I’m going to try the green one tomorrow, I think.