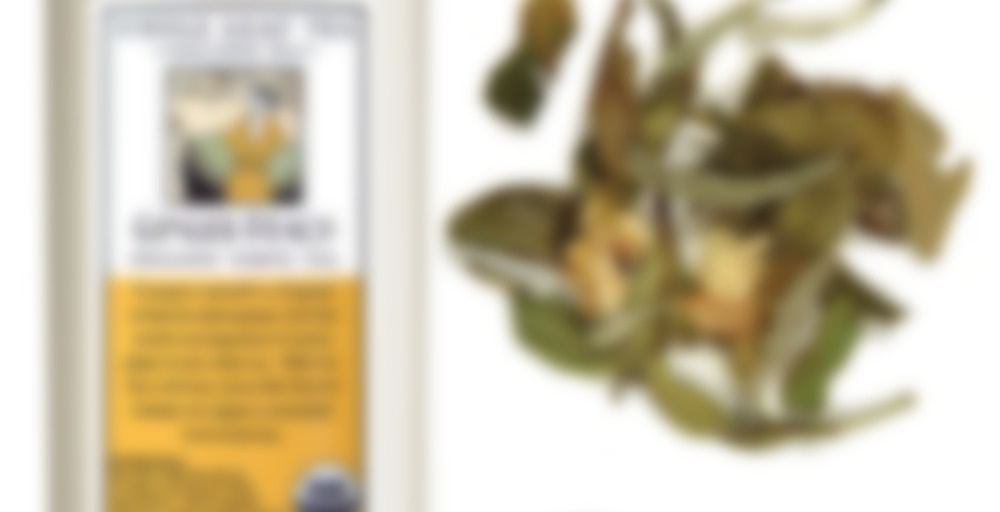 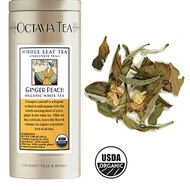 by Octavia Tea
79
You

Transport yourself to a fragrant orchard in mid-summer with this mouth-watering blend of peach, ginger and rare white tea. White tea has a delicate, honey-like flavor and contains the highest antioxidant level of all teas.

Our Ginger Peach white tea was a finalist at the World Tea Championships and is one of our best sellers!

The peach is sweet and juicy and the ginger has a pleasant peppery kick to it. The white tea is a little on the soft side – although I expected that with a white tea. There is a delicious honey-like sweetness to it that contrasts with the warmth of the ginger very nicely.

Did we get the same ones???

Remind me to look for this one in my TO BE TRIED Pile on Monday! LOL

What a good review I love peach and white tea. This sounds good.

OH! This is GOOD!

A Ginger Peach WHITE Tea! YUM! Usually I don’t get excited about ginger teas but this is nice! The White Tea mellows out the flavors but the flavors are just right!!! The peach and ginger couldn’t be more perfect in this! It’s very satisfying and has a smooth aftertaste with honey-like tones! I really like this!

Good both hot and cold!

I think this was another sample I had received with my order, I can’t recall for certain though. Anyways, I like white teas and I like peach, however me and ginger have a weird relationship. Fresh ginger I can handle and do enjoy in small amounts, dried powered ginger I don’t really care for. This tea tastes like it contains the dried powdered form. I can taste the white tea base and some peach notes and feels like it has potential to be a nice flavored white tea, but the ginger in this makes it impossible for me to truly enjoy it unfortunately.

Backlogging I got this tea sample from TeaEqualsBliss thank you so much! This mainly smells like peach. The taste is a good medium strength sort of juicy natural tasting peach with abit of ginger thats not over the top and a light plesant white tea. I think this is a great peach white tea the perfect amount of peach taste for me. Thank you so much for letting me try this I am very thankful.

Sadly the last of this sample, you will be missed.

#tiffanys2021sipdown Tea #222 overall / Tea #2 for June
Wednesday 6/2 — Amoda sub box Ginger Peach (by Octavia Tea.) Used the sample packet as a cold-brew LOVE IT. Would totally purchase more of this one, the white tea + ginger + peach.. I can’t remember more details as I finished this a week ago (writing this note 6/8) but if opportunity presents itself, I’d grab a 75g packet ($17.25 CAD on Amoda site) for 5 more pitchers of yummy! (:
#tiffanydrinkstea #tiffanys2021 #tiffanysfaves #tiffanyinthe614 #tiffanysteasipdown

This tea has a very light and fruity flavor that is both tasty and relaxing. I thought the peach flavor was much heavier than the ginger, but the two seems to blend together quite seamlessly, which is an improvement over other ginger teas that I have tried. While this tea didn’t wow me, it is the first white tea that I have actually liked. I had bought a whole tin of the tea, rather than a sample and I am pleased with my purchase.

This is one of three extra samples in my order from Octavia Tea. Honestly, I really did consider adding it to my order but Blood Orange won out in favour because of the lack of ginger in that one. Still, I was happy to see this in the box anyway!

Dry, this smells of solid ginger. Really, we’re talking so much ginger and I’m not just saying that because I’m not a lover of the stuff. And taste wise, as expected, this is heavy handed with the ginger – why wouldn’t it be? I mean, it’s a ginger peach tea with lots of ginger in it: this is not a shocking discovery. But it’s not all ginger: peach notes are present underneath that layer of ginger, especially on the back of the tongue after those first few initial seconds of ginger overload. Don’t gulp this one down. You need to go sip by sip and not rush the cup, otherwise you’ll miss the peach in it!

Worth note: I lost track of time steeping this and it got a couple extra minutes because I was focusing on my cooking and not my tea. This may have contributed some to the ginger imbalance, but not positive on that given the dry smell and generous amount of noticable ginger in the dry leaf. And, despite extra steep time this wasn’t even a bit bitter, so I’m impressed with that.

So overall; despite the fact this leans more heavily to ginger than peach I didn’t mind it no matter how my review seems to sound otherwise. I read this review to my Dad, since I’m writing on my laptop during the drive home and he said “Wow, you really hated it”. I didn’t hate it…

So far I’ve tried two Octavia Teas, and while I haven’t found one I’d reorder I definitely wouldn’t call either of them misses.