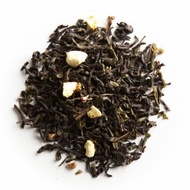 by Palais des Thes
66
You

Oh hello all! It’s been ages since I posted, hasn’t it? I’ve been distracted lately. Lego Harry Potter apparently deeply addictive and I’ve been playing it at almost ever chance I’ve had for the last two weeks or so. Apart from just telling the HP story, there are all these other little goals of special things to collect in the game and it’s knocking my OCD into overdrive. Collect ALL THE THINGS!!!!

I’ve had this one a few times already, and I initially ordered it because it’s a blend with vanilla in it. Vanilla and orange peels and apparently possibly a bit of red fruits. From the description I honestly can’t work out if there is red fruits flavouring added as well, or if that’s naturally occurring note in the blend.

Whatever it is, though, it doesn’t matter because I haven’t really been able to identify it anyway.

But yes, vanilla blend. It’s my vanilla obsession, still going strong. The boyfriend realised the other day exactly how many vanilla teas I’ve got currently, and the mocking would take no end. It didn’t help when I pointed out the three or for that he had missed or were blends with vanilla in them. I had a swap arrive from NinaVampi the other day and while he has seen it, he luckily for me haven’t made the connection yet. Three more vanilla teas! :D

I can’t help it, I’m searching for the perfect vanilla, aren’t I?!

It’s fun, actually, obsessing about a specific flavour like that.

Anyway, this one. Vanilla. Yes. Check. I wasn’t too interested in the orange peel aspect to be honest. Citrus flavouring is one of those flavours that have to be done just so in order to be really good, otherwise they’re just meh. Not bad, mind. Just… not interesting. I also couldn’t quite imagine what orange peels and vanilla would be like in combination.

But vanilla. So I bought it.

I can now report that orange peel and vanilla work rather nicely together in this one. The base black seems to be fairly strong, probably a Kenya, I expect. LPdT has this label coding for their teas which tells of region of origin and this pouch has the African label on it, which is what I’m basing my Kenya assumption on. It’s a good choice, I think. I find that a tea has to be at least medium strong, preferably stronger, in order to successfully carry citrus flavouring, especially if it’s citrus peels.

So the base and the citrus peels are prominent here. The vanilla is not obvious at first. But when you’ve had a few sips, you suddenly discover it and wonder how you didn’t see it before. Like camouflage. You see a picture of some mottled trees or something, and somewhere in there you know there is a moth, but you have to search for it. And once you found it, it’s totally easy to see it’s there. That’s the vanilla here. Like a fog creeping in on the flavour, slowly but surely, adding more and more to the vanilla experience. It’s everywhere, but near the bottom of the flavour in a sort of attempt at discretion, happy to let the citrus run the show.

I quite like vanilla in blends like this. Near the bottom and just adding a thick and creamy substance to an otherwise fruity flavour. I find that the vanilla in the Late Summer blend from ACP work much the same way, only that blend is a lot brighter than this one. This one seems heavier and darker. If tea had age groups this one would probably be late middle aged and starting to get somewhat curmudgeonly. (In comparison, the aforementioned Late Summer blend is somewhere in the late twenties or thirties)

And it’s funny really, that I find the vanilla is best in blends this way, because that’s not at all how I want it in a straight vanilla flavoured tea. Then I want much more power, brightness and sparkle on the vanilla.

This was a pretty good choice. I might buy it again sometime, but I’m not sure I really super-urgently need to once I’m through the pouch.

Collect ALL THE THINGS? Oh my. Sounds like me. It’s not enough to finish a game, it must be finished perfectly!

And loved the post, again. Wish I could be so descriptive!

I had some inital problems with it because something it really needs is a help file! There were a few learning by doing issues that I had with it. Also I had to change the controls around because the default was very unintuitive to me. I cannot move the character with WASD! It’s so weird for me to have that in the left hand when I’m right handed and there are perfectly good arrow keys right there. But now that I’ve got into it, I’m completely hooked on Lego games. :) I have my eye on a Lego Indiana Jones as well when I’m done with Harry Potter. :p The boyfriend has Lego Star Wars on his play station, which I briefly considered asking if I could try again, but decided against it because I don’t like the controller. It doesn’t agree with me. But this one is fun, I would recommend trying it.

Oh goodness. I’m the game-addict sort, so until I’m out of school again I must avoid all games! Facebook games keep sucking me in briefly until I get bored/frustrated though. Sounds like fun though. I love Lego (but does the game even have anything to do with Lego, really?)

Well the characters are lego men and the blocks are all over the place, but it’s not building stuff as such, really. There’s a trailer for the first year here http://www.youtube.com/watch?v=F57e6Ay-b04

I feel compelled to look at your highest rated vanilla teas now :)

Cheryl, I think they’re all fairly up there. I’m not sure their ratings can really be compared though, because I tend to rate them according to how I experienced them in the moment of drinking and then adjust upwards or downwards later if I feel it necessary. My ratings tend to be a snapshot of the moment, really.

DaisyChubb, yes, and it bothers me that there are some things that you can’t get until you go back and do it again whne Free Play is unlocked because you need to unlock abilities later in teh game first. But I suppose it makes for extended game play really, and makes the game ‘longer’. Some games you just do once, and then you know all the puzzles and can’t be bothered to do it again…

I did not like the Wii instructions for the game at all, though – most of the instructions focused around the broken motion controls and didn’t actually explain the game much. If you have played a LEGO game before, OR if you are very well-versed in video game conventions, no big deal, you would probably figure it all out quite quickly. If you are a relative newbie to video games, you would be very lost. Considering that LEGO games aren’t exactly marketed for most hardcore gamers, not providing more instructions seemed ridiculous to me. I bought the game thinking my aunt might also play it and spent the entire play time thinking, “She won’t understand how to do ___!”

Okay, watched the video. Oooh, I might get this! (The game, I mean, not the tea, although the tea sounds nice.) Do you actually play Quidditch, or is that just in a cut scene?

Also, forgot to mention, I think WASD controls became a convention because 1) some earlier keyboards had no arrow keys, and 2) it’s considered more ergonomic since you can hit the space bar with your thumb and it’s supposedly awkward with a right-hand mouse. I think that’s silly since I always just physically shift the keyboard to the side to use arrow keys, and space is usually the “use” key (open doors, etc.) and I never had a problem taking my hands off the arrow keys to briefly hammer space.

Daniel Scott, I would definitely have liked to have a small introduction. I was only a level or two in when I stopped playing the first day, and then the next time I came back, I accidentally went into Diagon Alley, wehre you can buy things you unlock with the points you collect instead of continuing the story. I thought the saved game had gone wonky and ended up starting the game over from the beginning. At the very least I would have liked to be told about the indicator for when it’s actually saving the game. I hate the checkpoint system!

So far Quidditch has been cut scenes, but there has been some broom flying. There have also been a few other, rather hilarious, alternative modes of transport.

When I tried it, I had never used a Playstation before, so I was completely unfamiliar with the controller. I’m sure it’s a question of just getting used to it, but I didn’t find it very intuitive to use.

I’m having this cold brewed. It’s nice! I didn’t read what flavor it was before tasting. I would have guess marshmallow. The citrus is not that obvious. I can see vanilla, but it also has a sugary candy taste to it. Not really like a vanilla pod.

It’s nice after a bit of gardening.

Same black tea base as many others from Le Palais des Thes which hide the rest of the taste.