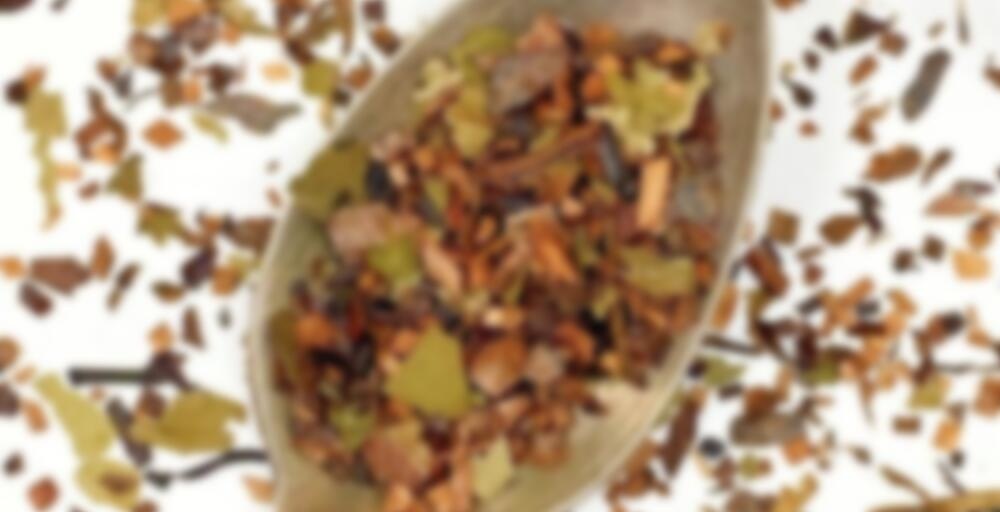 by Plum Deluxe
68
You

One of our favorite herbal teas is honeybush, a naturally sweet and somewhat earthy ingredient that is perfect for a calming cuppa. After extensive recipe testing we’ve come up with a caffeine free cuppa that has that somewhat buttery feel and a sweet creamy taste, just like shortbread (but without any sugar or butter, of course). We take fresh honeybush tea paired with cocoa peel and blackberry leaf to give that wonderful richness. It’s a simple tea blend with intriguing depth and flavor – it’s our new staff favorite.

Well that stinks, I just bought some of this one. :/

Maybe you can finagle some flavor out of it…!

The most prominent flavor in this is blackberry with a fake butter flavor. Kind of a creamy berry? Not terrible but definitely not what I expected from the name. I added a bit of sweetener to it. Overall it’s just kind of nondescript and I wouldn’t buy again. The more I drink it the more I get a sort of fake butter flavor from it which is a little stomach turning.

The flavor here isn’t great. It’s just a weird combination of flavorings. It tastes jumbled and strange and not at all like what it’s supposed to. With milk, it’s drinkable, but it’s really not right. There’s some pepperiness from the base along with strange flavoring. It’s hard to describe, but not good or accurate at all.

I love this one.

My bag and the website have different ingredients than are listed above.

Plum Deluxe Advent Day 18
Still catching up…this is another blend I haven’t been looking forward to. Smells oddly fruity and sickeningly sweet. Tastes like butter and berries. Not sure where the berry flavor is coming from. Not getting any kind of pastry or shortbread flavor.

It tasted like berries to me, too. I suspect all the blackberry leaf!

50
Not Recommended
Cameron B.
2725 tasting notes

Definitely not a fan. This is over-the-top artificial tasting… I can taste the honeybush underneath, and it has a peppery note to it that conflicts with the flavoring. As for the flavoring itself, it’s very fake-buttery and reminds me of the caramel-flavored syrups that I always hate. There’s something a bit coconutty as well in the aftertaste.

Ya, I definitely got that in the aroma, but I think I just got blackberry leaf in the flavor! (And seriously, what is up with that honeybush?)

I haven’t tried this particular blend yet, but I know exactly what you mean by the peppery flavor that sometimes appears. It always confuses me!

It’s also weird how it’s only in some honeybush, maybe it’s brought out by other flavors? Because I actually love honeybush and it’s not usually peppery to me.

It isn’t usually to me either, but the specific one they are using tastes that way to me. But now I have a suspicion their “base” honeybush may be Adagios, and I have never been a big fan of their base teas…

Well, after having to toss my advent tea into the Todd-box yesterday because I’m the only person on Steepster that doesn’t glow over banana teas, I can now indulge again (I just hope I don’t get any more nanner surprises this advent… I swear this happens to me no matter what advent I pick every year!)

The dry leaf smells like… creme cheese frosting to me?! Well, that is my favorite kind of frosting, so I’m okay with that. Though I am picking up a little of the “peppery” honeybush note in the aroma again… I wonder what honeybush they are using that I keep getting that?

My steeping cup smells a little more fruity… I still get sort of a frosting vibe in the aroma, but I’m also smelling… pineapples?! I like buttery shortbread, but if this tastes like pineapples in creme cheese frosting instead, I honestly won’t be disappointed…

Hmm. I honestly don’t know what I’m tasting. Not buttery shortbread… it is fruity, but tastes more berry-sweet on the sip. There is a vanilla/cream note I am picking up as well, so it’s really reading more as berries in cream to me? Which is pretty far off from buttery shortbread cookies… I mean, not an unpleasant flavor, just way off the mark. And ya, I’m definitely getting a peppery note in the honeybush again, and once again, it’s a bit off-putting with the other flavors… I don’t know where they are sourcing their honeybush, but this one just doesn’t seem to be meshing with me.

It’s a pleasant tasting cup, but nothing like what it says on the label, so ultimately a bit of a misleading blend. Or maybe I just got all the blackberry leaves in my portion, and it actually tastes like cookies for the rest of y’all. shrugs

I smelled this and it smelled really familiar. I then tasted it and it tasted really familiar. Then I realized it was butter. This tea is liquid butter. Perhaps a buttery shortbread but buttery is the key word here. While accurately named, I just don’t think this is a flavor of beverage I am looking for.

This is strange. I get that it is trying to be buttery, but there is an intermittent distracting ashy taste. The sip is light and caramel like, but it goes flat at the back and has a dead cardboard finish. I have to really focus to taste chocolate and it’s just the high notes of chocolate without any depth or richness. Not my thing.