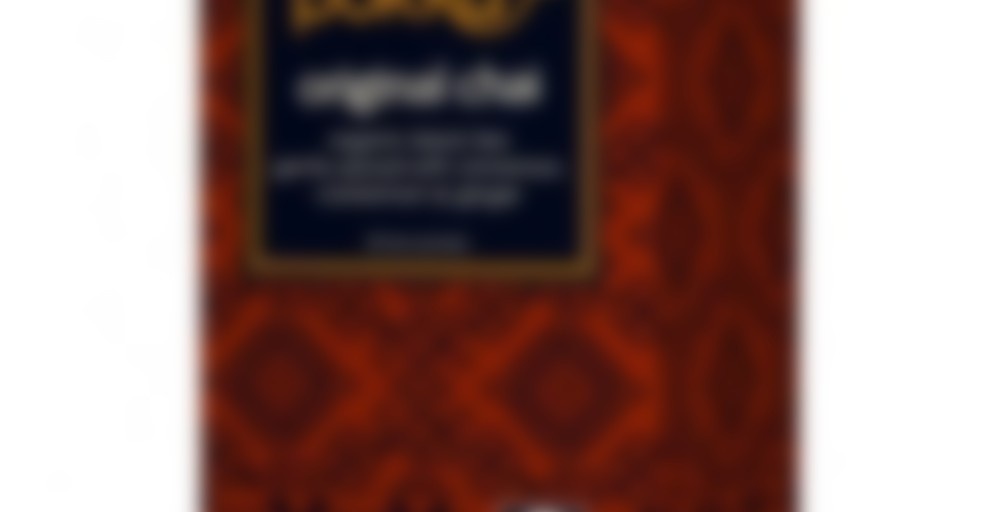 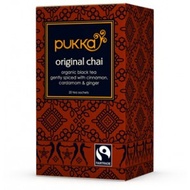 “Original chai with black tea and warming herbs. It contains a mix of five organic and Fairtrade herbs sourced from small, independent farmers around the world. Each is renowned for helping to bring a bit of spice into your life.

Mix with milk and honey for a cup of pure joy.
100% organically grown and fairly traded, we hope this is the best black chai you will ever taste." (Source: pukkaherbs.com)

Yesterday we went to a group meal with a lot of the boyfriend’s colleagues and respective spouses. There was an offer for after dinner coffee or tea, so I said ‘tea, please’ and was given hot water in a small pot with a lid, straight from the cooker, and a choice of three kinds of bags.

And then I kind of wished I hadn’t said anything and stuck to cola.

Choice number three: This one, which is a chai. I don’t much care for the spicy blends, and apart from not liking ginger, cinnamon is also one of the things I don’t like much in my tea.

I decided this was the lesser evil though, and as it turns out it was fine under the circumstances. I would never buy it for myself. I would never choose it out of a (better) selection. But for an evening where I’m not really paying attention to what I’m drinking apart from the fact that it was tea, it was acceptable. And not nearly as big a dislike as the other two.

It wasn’t actually overly spicy and the cinnamon element, probably because it was in combination with the other ingredients, were more sweet-ish than what I have otherwise encountered, which is what I think was my rescue.

I imagine somebody who is fond of chai might appreciate it.

I only drank one cup though.

I have Pukka’s Vanilla Chai and I was just as disappointed with it as you have been with their plain chai. I’m also not a great fan of chai in general but found Pukka have some of the worst tasting chai’s I have ever tried.

Bonnie, actually I’ve got some opinions on that sort of thing, and I suspect they’re strongly different from yours, so let’s leave it at that.

Ch3rryprinc3ss, at least I can now say I have tried Pukka. I’ve never had that brand before, but I’ve seen them around. Apart from not caring for the offered selection, I was quite pleased that it wasn’t Lipton and/or Pickwick which are the standard brands around here, so it showed some thought process involved in the purchase. (I’m not going to consider the fact that as it’s a German family, they might not have had any idea of ‘standards’ in Dnemark to begin with, so their mindless choice could be anything)

If a place has such a limited choice (and teabags only), I figure they are not serious about quality or getting tea right and I take a pass. I’ll have water, coke, or fruit juice under those circumstances.

I erased all my comments.

Scott and Bonnie, Well, as I had already said yes to tea before that, it would have looked strange and a tad rude to suddenly change my mind like that.

I wasn’t going to go into this, because I think it’s a cultural issue, but I would never bring my own drinks or food when invited somewhere else unless you have specific dietary requirements or was asked to do so. When you visit someone you eat and drink what is offered and if it’s not up to the same standards that you are used to, tough. You can have something else when you get home. Here, if you brought your own stuff instead of taking what your host offered, you would run a certain risk of the host taking it as a statement that their offerings (which they might actually like) were not good enough. It comes across as snobbish and rude, really. There were some discussion regarding this on the boards some time ago in which most people tended to agree with your approach, which is why I think it’s one of those cultural differences. But that’s how I was raised, so I would never do it.

I thought you were in a restaurant where in casual settings having your own teabag is acceptable. I was raised with the same manners as you and would never bring any food or tea unless I had allergies,etc. (Which I do have!)
At my age, I was raised with manners noone cares about these days!

Ah okay, I wasn’t aware of that. If it had been in a restaurant I don’t think I would have ordered tea actually. Then I would be more likely to have gone for a cappucino if they had it. That’s not something I can get every day. :) No need to erase anything, though.

Yeah, I thought you were in a restaurant, too.

I think Pukka’s Vanilla Chai is better than their Original Chai. A lot of their teas tend to be sweet because of the licorice they add (save for Three Mint, I think), and their chais especially are more sweet than spicey. I seem to be one of Pukka’s sole fans on Steepster, haha.

Perhaps that extra sweetness to them was part of why I found it tolerable. I’m almost tempted to try the vanilla chai now. But only almost. And mostly because of the vanilla. :p

If you want to try the Vanilla Chai I would be happy to send you some. I have had it on my trade list for a little while with no interest so it would be good to find a new home for some. :)

I might like that, but it will have to wait a while. I’ll be out of the country for a large part of July, so it would be best to do it after I come home. I’ll try to remember to send you a PM when we’re back and if you still have it then, I’d like to try a bit. :)

I want to love their blends I really do. But so far, all I have tried, uh no. Clipper teas are usually found on the same spots (organic, free trade, and all that) and are IMo usually a bit nicer.

I haven’t seen Clipper much in Denmark. I had it in a hotel we stayed in in Copenhagen, but I can’t remember having seen it otherwise. Of course I don’t really pay attention to the tea selection in the shops much anymore.

Right after being taken out of the protective “envelope”, the bag smells like a lot of freshly ground cinnamon.
Brews a murky, brownish liquid.
Smells mainly with cinnamon, but with ginger spiciness in the background and a tiny bit of licorice. Black tea is not evident.
The taste notes are equally divided into cinnamon and spicy ginger. Cardamom hides in the background, black tea is almost nonexistent and licorice is fortunately very subdued, not like in many other Pukka teas.
I had only one bag of this tea, so I preferred to steep it straight. It would probably taste better when done in a proper chai way, with milk, but even in this form it was still enjoyable.

Might just be me at this hour, but it’s got a bit of a sourish aftertaste. Not much of a spicy taste either—it’s definitely going more for sweet. I don’t consider it particularly outstanding as far as chai goes, but it’s drinkable.

I am on a mission to taste different Chais. I really enjoy the Pumpkin Chai and the Coco Chai Rooibois from David’s Tea and the Chai Spice from Stash.
I find that this one has too much cinnamon in it. Just when you smell it you can tell. Also, I hate that they added liquorice. It makes it too sweet for a Chai. I like my Chai spicy!

Warming and nice – my boyfriend loves it so we call it our “couples tea”. Cute :D