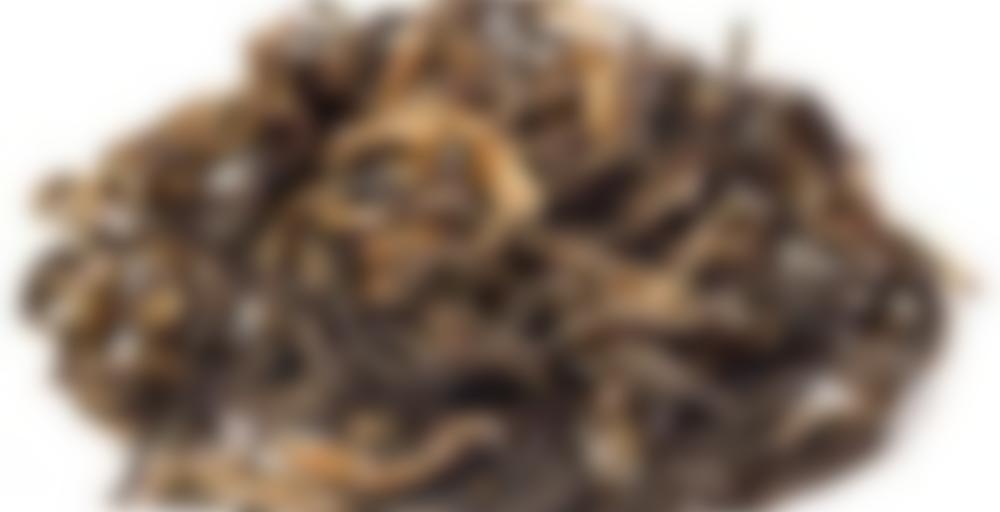 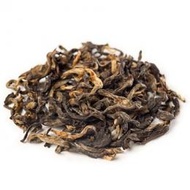 by Rare Tea Republic
80
You

An exciting offering for an adventurous palate, this unique tea is at once rugged and sophisticated. Hand crafted, golden-tipped leaves produce a slightly brisk liquor with notes of fresh hewn timber and woodsmoke and a lingering finish. This selection pairs perfectly with a hearty meal and can be steeped multiple times.

I have to admit I’ve been curious about this tea, well at first on Twitter they said the tea would taste like bacon which kind of turned me off for a while. Then I decided to go ahead and try it, perhaps it would be like a lapsang. So – I just got a sample.

Also I wasn’t sure how to prepare this, but the instructions said 4 minutes at 200 F so I thought I’d at least try it they way they suggested. I did use a lot of leaf though, the whole sample which was about 1 tsb. went into my cup, although they suggest 2 tsp. for this tea so I am not that far off the mark.

Wow, this such a very interesting tea, I’m so glad I tried it! My wet leaves definitely smell like wood smoke but it also has a sort of tart & tangy aroma like salt and vinegar potato chips!!!

The aroma of this tea is very barbeque-y. I have to say this does seem reminiscent of a lapsang but it also has some very interesting malt, cocoa and woody notes and there is a slight vinegary tartness in the finish. It definitely seems kinda bacon-y, the flavor reminds me of applewood smoked salt. It doesn’t seem like any other oolong I’ve had before.

The first steep at 4 minutes was a bit too strong for me; I probably should have gong-fu’d this from the very start. I did a second steep at 2 minutes and this is a much better cup for my palette. The slightly sour finish is a bit weird for me but this is one of the most unique teas I’ve had in a while. This is one tea that seemed to benefit from me adding a little agave nectar to it.

I don’t think I want to steep this again now because I might be up all night, but I imagine you could get 3-4 steeps at the shorter steeping time.

If you like the rugged complexity of pu-erh teas or lapsang you should definitely try it! I do not love it, but it was fun. I’d imagine this would be way too intense for some people’s palettes though.

Sounds interesting…….going on my list of teas to order from RTR.

They do sell out of stuff, I’ve noticed. They had a phoobsering oolong which is already gone, I liked that better. :)

How the…do you pronounce that?

I don’t have a clue!

I think the b is silent. ScottTeaMan’s Scool of Phonetics: FOO-SIR-ING. :))

Phoobsering would be hard to say with a straight face.

Yes it would ashmanra! I’m totally of the opinion that I should say it with the b now…

Notice how I misspelled school. LOL!! I just noticed that. :)) Hey, it is my scool-emphasis on cool!

Wow, that sounds awesome! O.o Even if it is Assam… I’ve never seen a smoked Indian before.

I have had this almost as long as I have been drinking loose leaf. Rare Tea Republic was the first tea place I ordered from other than The London Tea Room when I first started my loose leaf experience.
I don’t know why I never put down any tasting notes before – maybe I never actually tasted it. The little sample bag was open and there was not a lot of leaf left so I must have. Maybe I just didn’t know what to think of it back then five whole months ago lol.
My how we can learn so much in a short period of time.
I love this tea.
I have no idea if it is still available or not but in my list for shopping it goes and when the time is right I may have to seek it out and make an order!
Indeed there is a smoky bacon flavor to it – not the bacon itself but the smoky flavor that some bacon has – when it is smoked LOL.
Yes a bit BBQ ish but not BBQ Sauce.
A woodsy taste … hickory perhaps….very good.
This is absolutely an Autumn tea!
The aftertaste is just the tea base 100% Assam good and strong.
The smokey flavor rolls around on the tongue then dissipates magically leaving only the assam base behind. MMMMmmmmmmmmmmmmmmmm
More please.

This has a semi-juicy beginning sip and ends slightly smoky. It’s woodsy in the middle and that seems to be the primary taste on the tongue and as you swirl around in your mouth. There is a bit something else I cannot quite put my finger on…fruity, maybe. Regardless this tea will make you think, appreciate, and enjoy!

Is that Mothra like Godzilla and Mothra battle each other in the movies!

Bliss-I don’t know why, I NEVER get your updates or posts in my dashboard anymore, even though I “follow” you! Do you know why?