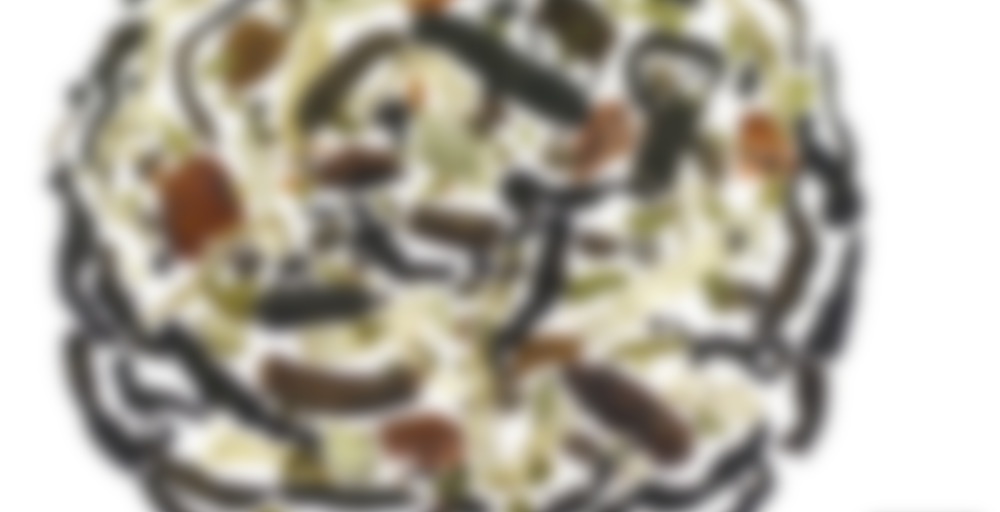 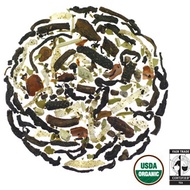 Velvety, mellow and deep, this chai is an enticing blend of energizing pu-erh tea, shade-grown yerba maté and cacao. Made even more inviting by creamy vanilla, nutty coconut and fruity, pungent and uplifting Ayurvedic long pepper, this is a most sophisticated take on hot cocoa.

Finishing up the last of the sampling of this that TeaEqualsBliss sent me.

It’s weirding me out just how much I LOVE this tea! I am not huge on Yerba Mate nor on Pu-erh – although I am acquiring a taste for both – so who would have thought that I’d come to really LOVE a tea with a yerba mate and pu-erh base? But this is so good. One of the best non-LiberTEAS-created chai teas that I’ve ever tasted. (although, that being said, this isn’t very spicy or really very “chai” like… but it is deliciously chocolate and coconutty!)

And for that, I am increasing the numeric rating on it… because it deserves more points!

Another new one from Rishi! This one has A LOT going on! At first I thought I kind of liked it…but as it cools I am not liking it as much. As long as I know it’s a HOT one…I should be ok, I suppose. I don’t know if I would buy this one to have in my stash but I am really glad I got to try it! I will say the Coconut is the primary flavor. I can’t notice the Pu-Erh standalone…which might be good for some of you who want to get into pu-erh but ‘just can’t’ or ’haven’t’ yet. I can pick out the Yerba Mate and as it cool more of the cocoa.

This is a really interesting mixed-bag of ingredients, most of which I wouldn’t think of blending together in a tea. Looking at my little sample package I can’t really see much actual yerba mate so I’m not sure why it’s mentioned in the title like its the star of the show or something. The long peppers weirded me out at first until I looked up what they were – they look really similar to birch or alder catkins to me.

The directions suggest boiling up the tea with milk like a traditional-style chai, but I don’t think there’s enough tea in the package to make up the ‘2 tbsp’ mentioned in the recipe. So I’m having it plain and I’m enjoying it just fine this way. There’s no black tea in this mix to give the tea a bitter or tannic flavour, so it doesn’t particularly need milk to cut it.

There isn’t much yerba mate to be tasted either – I think the pu-ehr and the chai spices end up making up the bulk of this tea’s flavour. The pu-ehr itself is quite mild (when you consider how earthy they can get) but it’s distinct and it mixes well with the bitter-chocolate flavour of the raw cocoa nibs. The chai part is there too – I can taste the cinnamon most clearly, but cardamom and cloves are hanging around too and the long pepper gives the tea a subtle bite. And the coconut gives it all a nutty finish that manages to work for me despite the mish-mash of components this tea is made up of.

The title of this tea, alone, sounds delicious. I am quite a fan of chai, yet mate is something with which I have not had excellent experiences in the past. Thus, the opportunity to try this tea promised an interesting experience, at the least. Conveniently, the small package, which I had, had directions on it, so, without further ado, I boiled one and a half cups of water with a cup of milk. Opening the small sample package, my nose was struck by a multitude of spicy smells, typical of chai, as well as the firm, bold notes of chocolate. The chocolate aroma was relatively rich and fairly sweet-smelling.

Once the liquid was boiling, I reduced the heat to low and added the tea mixture. After letting it simmer for five minutes (the packaging recommends three to five minutes), I strained it into a teapot. The chocolate aroma continued to billow from the pot, a bit less rich, now that it was diluted by other smells. I poured my first cup, unsweetened, as I wanted to give the tea mixture a chance to speak for itself.

The first flavor that struck me was the mate. The green-ness of it pervaded the tea, lending its semi-bitter taste to each mouthful. The chocolate, not quite so rich, was barely more than a hint in the undertones and the aftertaste. That disappointed me, as I had expected a more bold chocolate experience. Thankfully, the chai spices and the earthy pu’erh (yes, Rishi used pu’erh for the chai base) smoothed things substantially, their flavors ebbing and flowing through each sip. I took this opportunity to sweeten the remainder of the tea.

This brought forth the proper effect! While the chocolate still sat in the undertones, something about the milk enhanced the chai spices, so that one clearly tasted spicy chocolate (just not on the forefront). The milk served to subdue the green-ness of the mate and bolster the earthiness of the pu’erh. As a whole, the flavor was more earthy, more smooth, and more pleasant. The mate had not totally left, but it behaved more properly with the other flavors, now. This was certainly a blend that I would recommend for lovers of chai and of earthy teas. On my personal enjoyment scale, I would rate this tea an 87/100.

Nutty with a bit of coconut. This tea is decent but I think I’d like some more spice. It is chai after all :P

I loved it so much, I returned to buy two more so I won’t run out. I made the chai using the methid described on the can. However, in place of one cup of milk, I substitute either 1 cup of unsweetened organic coconut milk or a half cup of this and a half cup of unsweetened organic hemp milk. Either ofthese optionsis only one carb. I added one packet of organic stevia which created a true dessert flavor on Atkins diet. My partner was so impressed that we also bought a variety of cocoa flavored teas (and Crio Brü Vega Real)! Such liquid indulgence is helping us meet ourweight loss goals. My rating is the bright green lip-smacking ball (on my Ipad, I am unable to select the rating).