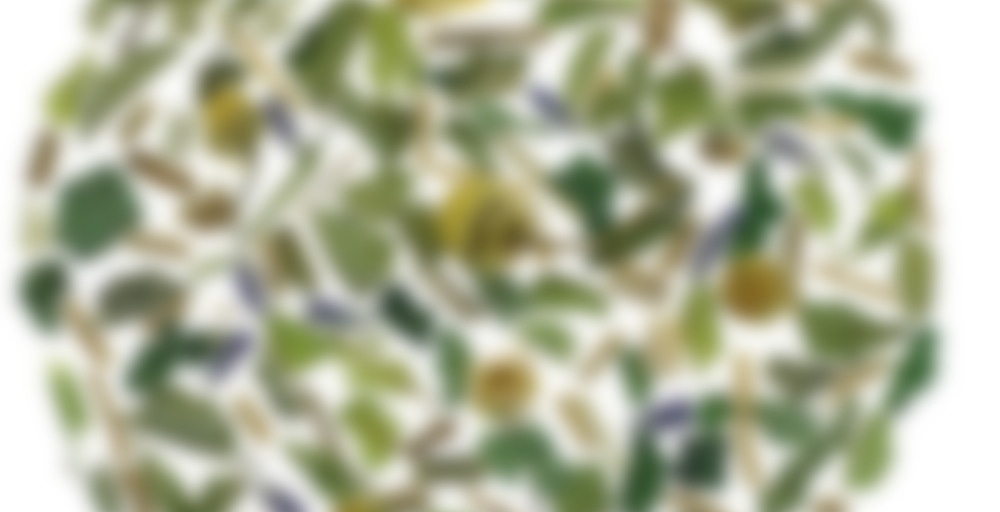 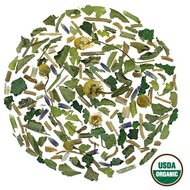 This de-stressing blend of calming botanicals and aromatic flowers is soothing to the mind and palate. Its wonderful balance and smooth body complement the relaxing effects of valerian root.

Full review with my thoughts on medicinal value is up at www.itsallabouttheleaf.com, but here’s an excerpt:

My sample was a little powdery; found some whole chamomile buds, but the concoction looked mostly like something you’d sprinkle on a roast chicken. Steeped to full recommended capacity, the lemon-mint essence that is the lead-in to most herbal nightcaps is okay.

thanks for sharing your review. I’ve found that valerian is the only thing that works for me, so I don’t bother with “sleep” blends that don’t have it.

In a review somewhere/some time ago, I wrote that I wish there was a knock-you-out cold herbal that was un-lemony and un-minty. I don’t think one exists.

I agree. My tin contained powdery herb. Not a bad blend but hoping my new shipment of Sleep Tea by Art of Tea will be a step up.

This tea was a powdery mess. It took more time to clean my infuser and cup than to decide that this is not my cuppa. I thought I detected licorice, but perhaps it was the V.root..any way not for me:(

I have to confess, I was leery of trying a new botanical wellness tea, even if though it was from Rishi. I have tasted quite a few herbal blends lately that were supposedly wellness teas that tasted more like medicine than anything i wanted to drink for pleasure. I happen to think that drinking a tea for pleasure is more important than drinking it for wellness purposes.
I should have trusted Rishi. I have never had a bad tasting tea from them. The tea definitely smells and tastes herbal, but in a good way, in a herb garden in the warmth of late summer way. The peppermint was the predominant flavor, but I could also taste the other herbs. What I could not taste was the valerian root, the primary ingredient that causes this tea to be relaxing and calming. But that’s a good thing. Valerian root has an odd taste that most people find unpleasant.
You can read a full review on Tea Examiner on Examiner.com

Today I’ve established a discipline to not drink tea past 3:00 PM, so that it won’t affect my cortisol level via caffeine. Last night I had trouble going to sleep. Anyway to get to the point I had purchased this Serene Dream yesterday for the simple reason that it was the cheapest loose leaf tea Rishi offered at Whole Foods. I will take a sip now, and it’s 7:41 PM but I’m jumping to the conclusion that this doesn’t contain caffeine. I should mention/preface I added two tsp of German Rock Sugar from Teavana and this cup of tea is so nice. Second sip, I realize that this tea is nice only because it’s the perfect temperature after waiting 15 minutes, including 5-6 infusing. Third sip , I am reminded of Wild Orange Blossom/Youthberry blend (Teavana) not because it taste similar but because that is what I rather be drinking right now. Will give it another sip… Thank God I added rock sugar!.And another , a big gulp as I’m just trying to finish it up. Two more sips and I hoped this had mint. Maybe try this with Mint, otherwise look else where for a night time tea.

I’ve been drinking this tea every night before bed for the last week. It really has grown on me, I didn’t particularly enjoy the first cup because it seemed like a rather odd combination of flavors at first, but it had the desired effect so I kept drinking. By desired effect what I really mean is this tea knocked me out in under 15 minutes, I didn’t even finish my cup.

I could not for the life of me figure out why I had that reaction to this tea, it normally takes me hours to fall asleep, but after a little reading I realized that valerian root and my seizure medicine don’t really play nicely together. My doctor told me that valerian is actually a pretty commonly suggested treatment for insomnia for people with epilepsy since sleep depravation is a major trigger. I really wish he would have told me that any time in the last 10 years when I’ve complained about not being able to sleep.

Anyway, this review may not apply to most people, but I just wanted to note that valerian actually interacts with a lot of medications so you’ll want to be careful about that if you’re taking any. In my case I was told not to drive or operate any heavy machinery… also avoiding sharp objects might not be a bad idea because this really knocked me out quick. If you aren’t sure if it is going to be a problem just give your doctor a call, in my opinion, it is better safe than sorry when it comes to things such as this.

Now on to the tea itself.

As I said before, this tea really grew on me. After some thought I think my initial dislike was because I don’t really like spearmint. You can really taste the spearmint and chamomile, but what I had trouble picking out was the valerian. Part of that may just be because I haven’t been exposed to valerian enough to really pick it out. The lemon verbena, lemon balm, and lavender flowers really balance this out nicely and make for a nice herbal blend.