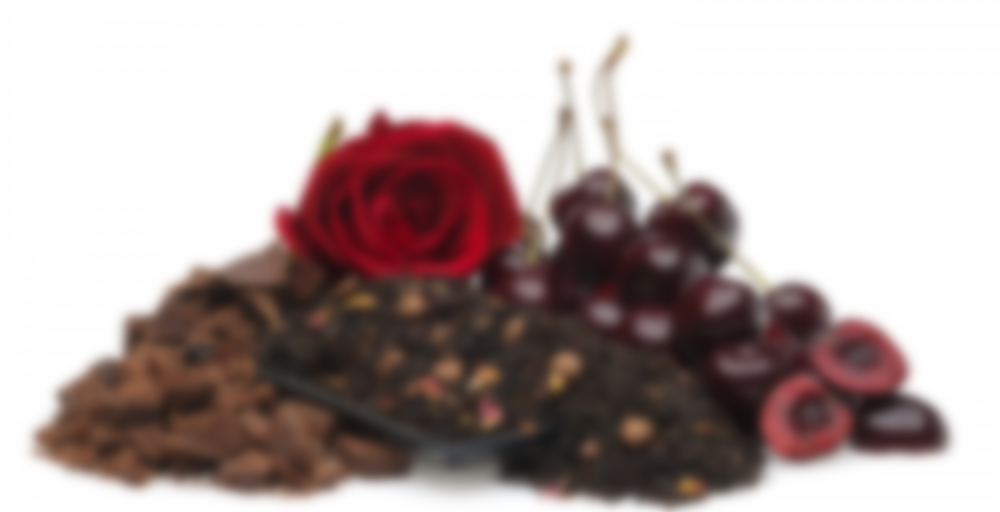 If chocolate covered cherries are your guilty pleasure then you are in for a tea that is dripping with the sweet indulgence you love. There is something sinful about the taste of this tea. Don’t try questioning it, just let yourself go and embrace it. A prized black tea is enhanced with delicious chocolate drops and sour cherry halves for a perfect, coveted sweetness and delightful candied smell. Don’t try questioning it, let yourself go and and embrace the sinful taste of Cherry Kiss Black Tea. This delicious blend is for you to keep under wraps and treasure it down to the very last sip.

I made a 12 oz. timolino full of this for myself, to enjoy sipping on in the afternoon. My preparation was 2 tsp. of leaf for the timolino, steeped with boiling water for four minutes. I noticed that after removing the brew basket, not all the chocolate drops had completely melted.

I split the 12 oz. amount into two cups – 6 oz. each. One I had straight and one I took with milk. Both were delicious, and I was able to note with both that the cherry was coming through more prominently than it had last time; I’m going to chock that up to the chocolate not fully melting and there consequently being less chocolate in the cup the mask the cherry notes.

It’s quite sweet and smooth, with very light notes of chocolate and the black base. The rose comes off in smell, and slightly in taste for the milkless cup. The one with milk, however, has no rose notes as far as the taste goes. Obviously, the milk cup is significantly creamier too and has a thicker mouthfeel.

This is a very pleasant tea, and I’m quite impressed that the sample size I received from RiverTea has been large enough to yield three cups so far with enough leaf left for at least a fourth. I still wouldn’t restock this though, but only because it’s quite similar to DAVIDsTEA’s Love Tea #7 which I have lots of; I wouldn’t want large amounts of both at the same time. Once I’m out of Love Tea #7, I may choose to stock some of this for a while instead, though.

So full disclosure, I don’t like cherry. I like fresh bing cherries, but that about it. I also do not like chocolate…can you tell this is one my wife picked out? So I will not be rating this, as it’s just not fair.

This tea is okay. It’s the closest to a big cherry I’ve ever tasted, and I don’t taste a lot of chocolate, so it was no hardship to finish this tea. If you like cherry tea, I would definitely recommend this. It’s slightly artificial, but yummy. My wife loves it.

I am on an unending quest for a cherry tea that does not taste like Herbal Essences.

I have yet to find a good cherry tea, this sounds promising…

Huge cherry fan – this should be something that I will love.
It’s just ok. This one actually has more cherry flavor than most that I’ve tried – I didn’t have a burning desire to add more cherry tisane to it. I’m jut getting a hint of chocolate – just barely there. The base isn’t my favorite, but it’s not really offensive.
Not sure what’s wrong with this – everything is just ok, but not special for me.

Just not the cherry WE are after!!

Exactly, it’s not THE cherry… still hunting for the perfect cherry tea. I would love to find an amazing cherry green – but would be happy with a cherry black. :))

nope. not even sort of. thanks cavocorax, but i’m pretty sure i dislike the “chocolate” that RiverTea uses. thankfully that crosses off a bunch of teas of theirs for me that i now don’t need to try. this is just.. not a happy place for me. it’s not even artificially cherry..it’s just. wrong. i’d rather drink perfect carlos, and that was a pretty averagely adagio blend.

not horrible but just, no thanks… the sink will love you more

Oh the sink, always there to drink up everything you don’t like :)

Apparently I forgot to review and rate this, but that doesn’t bode well for it.