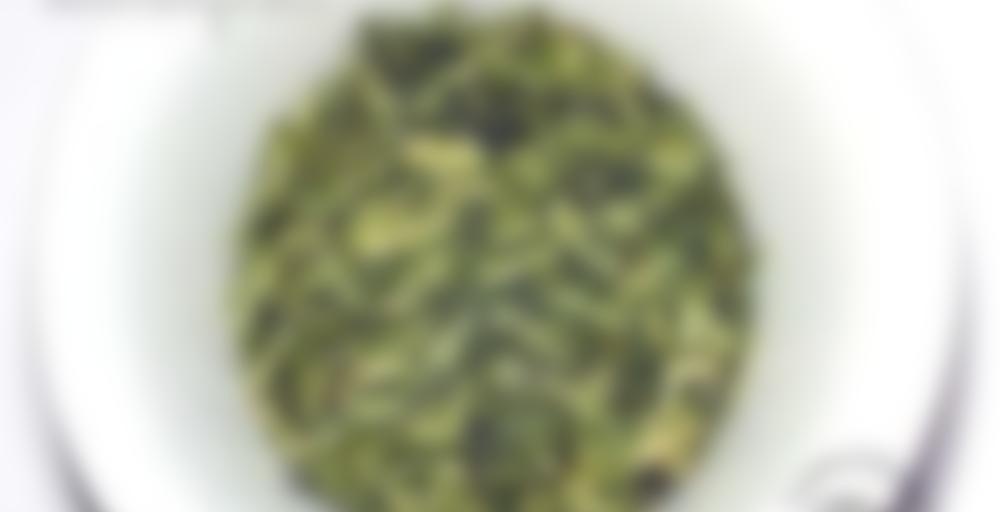 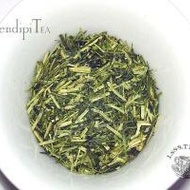 This one was part of the introduction to Japanese greens that EvaPeva sent to me a while ago, and I have to admit that this particular tea has been standing around in the cupboard being all neglected and shunned because I was a little bit afraid of it. For some reason that I honestly couldn’t explain if I tried, I’d got it in my head that I wouldn’t like it.

Then today I decided to try it. I’m not sure why I didn’t change my mind today or whether there had been someone else involved with inspiration powers. I just tried it out.

The leaves look like ordinary sencha with some fragments and dust mixed in, along with a handful of bits of something that kinda looks like hay. A little seaweed-y in smell, but other than that there wasn’t really much in the way of any kind of aroma of the dry leaves. Certainly nothing to be scared of.

After steeping it got that thick, fat slightly sticky smell. It was rather seaweed-y and a little cat breath-y, but that wasn’t really scary either. I’ve come to expect that from greens. Especially japanese greens. It was light green-ish in colour, a bit murky and honestly not really very appetising looking. I assume it must have something to do with dust-y fragment-y bits. So maybe not the most pleasant sight or scent in the whole world, but nothing out of the ordinary and nothing really to be nervous about.

(And no, I do not believe that matcha has been added to it. At least not on purpose. It doesn’t look like stuff that has had real matcha added to it, it looks more like the sort of dust and fragments you find at the bottom of the tin. Besides it doesn’t say anywhere that I can find that there should be matcha in it, and I don’t really think that would be something you wouldn’t mention.)

It’s supposed to be stems and twigs and what not and it’s not really supposed to have hay in it (right?), but it does taste a little hay-y. It’s got a bit of a bite to it, right at the back of the throat. A green flavour but a slightly darker tasting green. Not darker as in fermented, but darker as in… daaaaaarker. Less bright. Less sparky. Less I-Am-A-Lovely-Spring-Day-Come-Smell-My-Flowers-Yay!-y

I think maybe kukicha is to greens what smokies are to blacks. Green tea for grown ups.

I did a second steep too and that’s even greener. The aroma is a little less in-your-face-y but other than that it’s the same. Apart from it looking, you know, extremely very green.

The taste seems a little toned down here and loosing some of that daaaaaarkness that I liked in the first steep. It’s a bit more normal sencha-y here. Apart, you know, from the filthy-looking colour.

I like it, but I definitely liked it best the first time around.

I have a sample of Kukicha that I totally forgot about — your review has reminded me that I still need to try it. It sounds really interesting!

My first thought when I read “cat-breathy” was “hairball tea!” :o)

Cat-breathy is such a great adjective. Why is it cat breath always smells like old fish no matter what they’ve been eating?

Probably the same reason I can’t bring myself to eat tuna in any form.