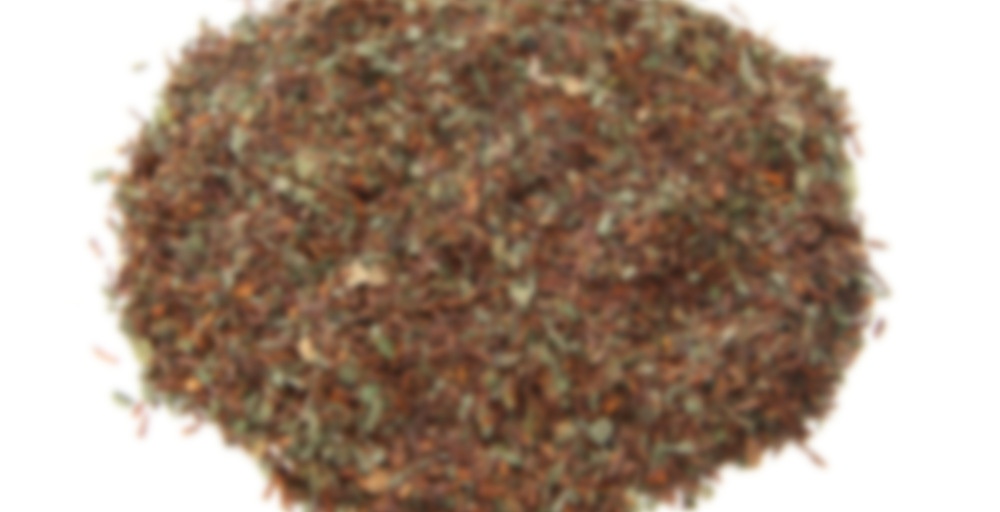 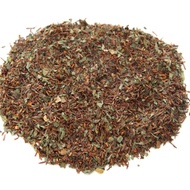 Oh dear what a New Year’s Eve dinner! I made blini and served them with caviar and creme fraiche, made steak and shrimp scampi and a huge pile of (collard, turnip, kale) greens, and chocolate pot de creme for dessert. Champagne with all courses (even dessert! ESPECIALLY dessert!)! We are now g-r-o-a-n-i-n-g with satiety. I thought a tisane with mint in it would be just the thing as an after dinner digestive. Perfect. The mint tastes so refreshing, and the rooibos is so soothing. I love this tisane for nights like this :)

I will be curled up in bed at midnight, so have a Happy New Year Steepsterites!!!!

Mercy—you put my humble tacos and leftover fruitcake to shame :)

Happy New Year gmathis and Rabs!!! I had a bagel with an egg for Christmas dinner because I was sick – I had a lot of catching up to do :) :) :)

We tried this tea last night. We normally have a pot of some thing caffeinated right after dinner. We move on to tisanes after that so I can sleep. It doesn’t seem to bother Dylan much, but I haven’t been sleeping well for a while. I thought it might just be the caffeine but so far I’m still not sleeping well.

I thought mint and rooibos wouldn’t be bad together. I like both a lot. I don’t think I’d stock this one up though. It may be that different steeping parameters will change that. I think it’s just a combination that doesn’t appeal to me. The rooibos is strong in this one. I think it powers out the mint a bit. It feels like the flavors are almost clashing in my mouth. The epic struggle in good vs bad is played out by this titanic battle of rooibos and peppermint…… Just kidding. It doesn’t feel like they are fitting together. Like two people who never learned to play nice with others being locked into a broken elevator. I think the rooibos may just be a bit too woodsy for the peppermint this time. I’ll try some shorter steeps to lessen the rooibos.

This is one that I requested/signed off on in my swap with Tunes&Tea. I think it was because the name was fun and it was from SerendipiTea, because I’m not the biggest rooibos fan, though I have found a few I have enjoyed. So mint and rooibos, very simple and yes very refreshing. The peppermint is dominant in the taste but the rooibos grounds it. Nice palate cleansing, which is exactly what I needed right now! I think I shall take JacquelineM’s advice and add honey next time. Thanks!

well i liked this simple blend better than i expected, but it’s not one i find myself going back to or wanting to share with others. i think there are better things to do with rooibos than adding peppermint. so there you go.

I am so close to have the bedroom redone that I can almost taste it, not in a ‘I have been licking the furniture’ way either! There will be much rejoicing when I am finished because it has been taking so much time and energy, also the cats are in a tizzy over all the moving furniture. Pretty much all I have left to do now is put everything away and think of an official name for my new tea area, it just doesn’t feel right calling it a lair if I am not longer underground.

Today’s tea is an herbal blend from SerendipiTea, Fellini’s Folly, named for director Frederico Fellini. I am not too familiar with his work (not much of a film person) but his inspired tea caught my eye because of its ingredients: Rooibos, Peppermint, Golden Raisins, Anise, Orange Peel, and Licorice Root (all organic)…specifically the golden raisins (SULTANAS!) I love golden raisins, much more so than their darker counterparts which I will not even acknowledge. The aroma is quite strong, a potent chill of mint, sweet woodiness, a touch of licorice, a touch of anise, and a finish of raisins. It manages to be cooling and warming at the same time, an interesting contradiction.

Giving the tea a nice steeping brings out the sweeter notes. The wet leaves have an aroma that is a blend of honey, caramel, wood, and anise. There is a finish of citrus and then a nice pop of mint that lingers and cleans the sinuses. The liquid is a bit more subtle than the leaves, it has more or less the same notes, but they are gentle and a touch sweeter. I do believe that the aroma of sultanas is much stronger now, which makes me happy.

Tasting this tea is quite interesting! It starts off with a cooling sensation from the mint that cools all the way down my esophagus, but as soon as it passes into my stomach it blooms into soothing warmth. The taste, after the initial mint coolness fades, is sweet with notes of caramel, anise, and sultanas. There is a bit of licorice sweetness at the finish, but it is faint and not at all cloying like licorice can be. One thing I really liked about this tea is that the mint seemed to counteract the dryness from the rooibos that is usually present.

For blog and photos: http://ramblingbutterflythoughts.blogspot.com/2014/08/serendipitea-fellinis-folly-tea-review.html