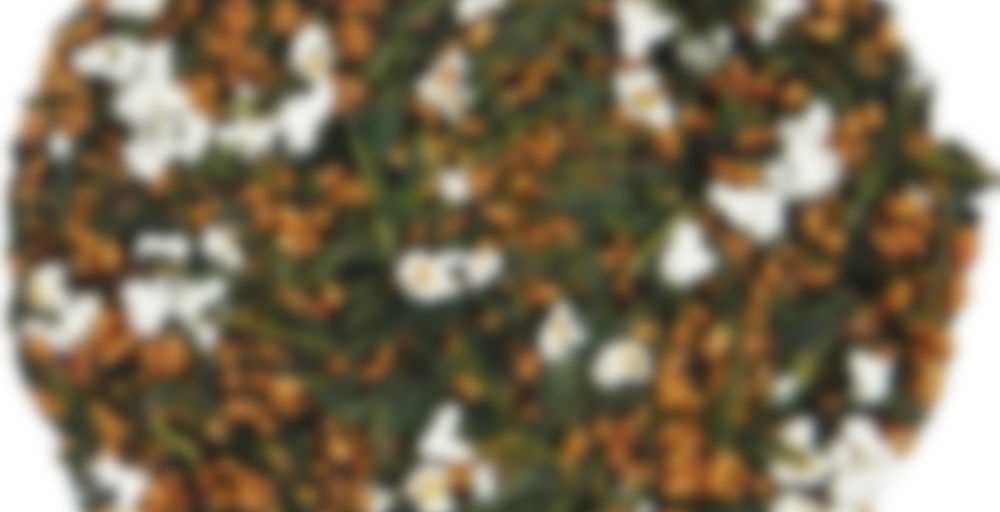 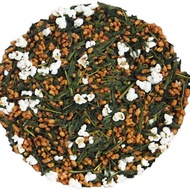 This is a specialty Japanese green tea that is blended with fire-toasted rice. A good grade Japan sencha is blended with the toasted rice. The fresh vegetative character of the green tea is imparted on the cup but it is tempered with the bakey-like character of the rice. There is a natural sweetness and almost chewy character to the finish of this tea. During the firing of the rice, it is not uncommon for rice to ‘pop’ not unlike popcorn, hence the pet name ‘popcorn-tea’.

Legend has it that during the 1400’s an important samurai warlord in Hakone on the Izu Peninsula of Honshu Island (the Izu Peninsula is near the Shizuoka area) was having tea in the morning discussing a battle strategy with his patrol leaders. A servant by the name of Genamai was serving hot tea to the group. Leaning over to give tea to the warlord, rice that he had surreptitiously taken for a morning snack fell out of his pocket into the steaming hot tea. Some popped upon hitting the hot tea. The warlord was incensed, jumped up brandishing his samurai sword he promptly cut of Genamai’s head in one fell swoop. He then sat down to continue the meeting. Despite the fact that the tea had been tarnished he drank it anyway. The flavor was very unique and he enjoyed it tremendously. In honor of poor Genamai he pronounced that this rice and tea be served every morning and be called ‘Genmaicha’ (cha being the name of ‘tea’ in Japanese)

Bringfresh cold water to a rolling boil. Place 0.5 to1 teaspoon for eachcup into the pot. Bring the water close to the boil (approx 180F or90C) cover and allow to steep for 3 to 4 minutes – Do not remove theleaves from the pot because they can be used repeatedly until theflavour of the tea is exhausted, This makes green and white teas muchcheaper per cup than it would seem. Green and white teas are normallyserved without milk and sugar.

This is one blend I have wanted to try ever since I began researching tea. It stood out as unique because of the addition of the toasted rice. Out of the packet, it’s visually appealing thanks to the toasted colour of the rice against the dried green of the leaves, with the odd large fleck of popped rice, which looks very much like popcorn. The smell is fairly strong too, predominantly of the rice with little room for the tea.

Once steeping the aroma grows even more. It is intensely nutty and savoury, although after a few minutes a hint of the green tea forms in the backgroud. The liqour is a pale mixture of green and yellow.

The taste of this tea has the familiar nutty and earthy flavour from the scent, but the sweetness of the tea was much more noticeable. The body of the tea wasn’t as heavy as I expected from the strength of the aroma. After drinking my mug down I was left with a slight buttery taste which was very pleasant.